I like this theme. It seemed a bit harder than a typical Monday to me; I was surprised to see that my time was under three minutes (barely, but still).

We have three grid-spanning movies with clues that pun on the titles. 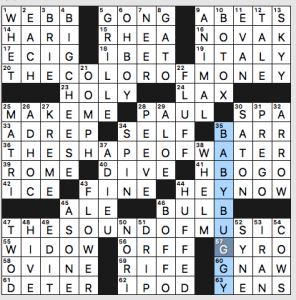 It’s possible it felt harder because I am completely exhausted.

What I didn’t know before I did this puzzle: that anyone actually used the word WHELM. Obligatory link to this.

I’m fighting off a cold, so I’m going to make this quick. Thankfully, the puzzle is a straight-over-the-plate kind of Monday.

Our theme is well-known phrases that include a word which is also a part of a dinner set. 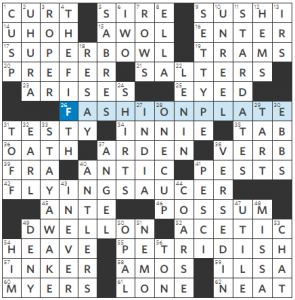 I don’t mind MISSA [“You don’t ___ trick!”] since my daughter, Marisa, has been called this ever since her kid sister learned to talk. 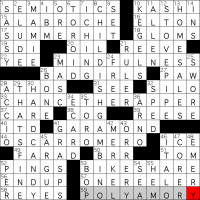 joon here with the review of natan last’s new yorker themeless. i’ve taken to doing the weekly new yorker (and some other puzzles) using only the down clues, and boy was this one tough. i was worried at times that i just wouldn’t finish, as there were several long downs i knew i would need to piece together from crossings, which is a lot tougher without, you know, any of the crossing clues. but i managed.

on the first pass of the clues, i managed these:

(i probably should’ve also put in {Lincoln-era topper} STOVEPIPE, but i was thinking it might also be some kind of ______HAT.) anyway, this isn’t the least promising start, but i was definitely worried about some very long answers that i just had no idea about: {“Redbone” Grammy winner} (15 letters) and {2008 Madonna album} (9 letters) could be basically anything, including including things i’d never heard of.

but, okay, i started chipping away at some of the acrosses. OI_ pretty much had to be OIL. that didn’t really help, but getting from B_KE__A__ to BIKE SHARE did. that gave me HEM for {Jumper’s line} and SEA for {“It was considered a virtue not to talk unnecessarily at ___ … “: Hemingway}, which quickly produced ONE-REELER and POLYAMORY and the whole SE fell.

the next break was getting OSCAR ROMERO from O__A__O_ERO. i wasn’t certain about this, of course, as it’s a name i’ve never seen in a crossword, but it’s a name in the news (although was martyred in 1980, he was canonized by pope francis just last month) and i tried it out. many good things happened then: i got {Many a wedding invite, these days} ECARD and {Gets} GRASPS and then the font GARAMOND and then actually CHILDISH GAMBINO for the grammy winner. that’s a name i have heard of, fortunately, but really knew nothing about. (apparently it’s the name donald glover performs music under! that feels like something i should have known.) that was enough to get me the NW corner, although i had to kind of guess my way into {“Crazy Blues” vocalist Smith} MAMIE from MAM__ crossing SD_ and YE_.

the next domino to fall was the crossing 15, CHANCE THE RAPPER, and then BAD GIRLS. after that, it was pretty straightforward except for that madonna album alongside {“Sure, go for it”}. based on _H__S___ i tried THAT’S COOL (with CURAD at 49a) and then THAT’S NICE (with NORAD) and finally THAT’S FINE (and FARAD), which worked much better. so then the madonna album was something _A__CANDY, with HARD CANDY looking like a good bet. everything worked out, and i finished in just under 15 minutes.

so, i had a lot of fun with this. looking at the puzzle overall, there are so many now answers that i’m (as usual) jealous of natan’s construction. i know that fresh isn’t everybody’s preference, but boy does this kind of grid tickle my fancy. in addition to CHILDISH GAMBINO crossing CHANCE THE RAPPER to anchor the grid, BIKE SHARE, POLYAMORY, and OSCAR ROMERO are all very au courant. i like the typeface GARAMOND, and MINDFULNESS feels very modern although it’s of course not a new word. {Fond of the side-eye or upside-down-smiley emoji, perhaps} is a very contemporary way to clue SASSY.

i also appreciate natan’s inclusiveness. the two 15s, plus MAMIE smith, debbie ALLEN, and della REESE are all african-americans. salvadorean bishop OSCAR ROMERO is a hero to many latin americans. sexual minorities are also represented by {Type on Grindr, maybe} MASC and POLYAMORY. ({Love going to a few different parties?} is a fun clue for that one, by the way, that i didn’t see while solving downs-only.) and you’re not going to see {___ work, topic in the feminist economist Nancy Folbre’s research} as a clue for CARE in any other puzzle.

so that’s a stylistic preference, but count me as very much in favor of natan’s style. from a purely technical standpoint, the grid is excellent. there is really no garbage. the closest thing to an undesirable entry is probably YEE. this is a really tight construction, and should be applauded on its merits.

that’s all i’ve got. have a lovely monday! 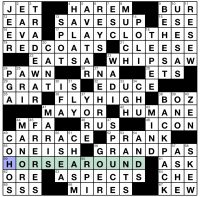 So, a confusing revealer explanation that took a bit to grok, but I enjoyed the theme when it did become clear to me: each themer could have the word HORSE at the front of the first word or the back of the second word. So HORSE is going AROUND the themers: HORSE PLAY + CLOTHES HORSE, HORSE WHIP + SAW HORSE, etc. Not bad! I’m not as excited about HORSECAR (?), but all of the other themer word + HORSE combinations are strong.

#includemorewomen: What I wasn’t excited about in this puzzle was the “women are property of men” clues/answers: [Sultan’s group] for HAREM and [Beatle bride] for ONO. Yikes! I was pleased, at least, to see that [Actress Longoria] and [“Curious George” creator … Margaret] were allowed to be clued with respect to their own accomplishments. Even still, there are way more men than women in the grid or clues: John CLEESE, Dickens / BOZ, Michael CHE, “Papa Bear” HALAS, Ray Charles, Hans REYS, ARI Shapiro, NEHRU, Steven CHU, FRERES, and Arthur ASHE. Some nice diversity amongst those men, but the stark contrast in men vs. women in the grid can’t not be mentioned. What a cool indie puzzle! Took me close to half an hour to complete, using my smartphone’s Crosswords app. Here are several clue-answer combos that made psychic indentations as I was solving: