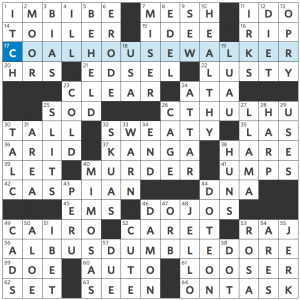 This week we’re looking for “a form of address with a total of ten letters.” We have a very literary grid, chock full of characters:

On the principle of “when you have a list of things with no immediately apparent connection, generate a list of corresponding things,” let’s list the authors of the literary works referenced herein:

And there we have something! They all are commonly referred to by their initials rather than first and/or middle name. But is that it? Anagramming those letters doesn’t give us anything useful — “Is it HEP JACKALS?” I asked Jesse, who patiently suggested that I keep looking.

What else can we do with a set of letters? Another extraction principle for solving metas is that there are often additional entries in the grid that might correspond to the first set of entries, or to something suggested by the first set. What can we find with those authors’ initials? Turns out, there is a set of four-letter entries that (mostly) intersect the themers, and that begin and end with the initials in the set — here they are in corresponding order:

If you take the letters in between, they spell DE AR RE AD ER — DEAR READER, a form of address with a total of ten letters, and our answer.

I’ll leave you with this demented work of art that only the internet could make possible: