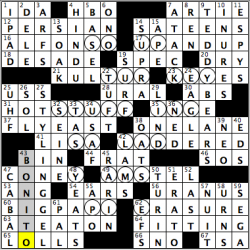 Hello there, everybody! Hope all is well with you and plans for you and your family for Thanksgiving are going along just fine. In today’s grid, six staples of a traditional American Thanksgiving dinner are found going across but are broken up by black squares. The circled letters clue you in to the “break” happening with those words. There is a reveal in the grid as well, ATE A TON (63A: [Indulged at Thanksgiving (as in the six-course dinner hidden in this puzzle)]).

Though the texture of my hair is such that I would never really use any STYLING GEL, I do like the words as fill in a grid at the very least (27D: [It’ll make your hair stand on end?])). Always love learning new things when solving a puzzle, and LADDERED was definitely new to me. (I’m sure many who have monetary investments would not have had a problem with that.) If BONITO, new to me as well, had referred to the Spanish word for “pretty,” then the entry would have been a cinch (43D: [Mackerel’s cousin]). There were a number of entries referring to European geography, which only served as a reminder that it’s now been almost a decade since I’ve been on the continent. I would not mind seeing what BASEL (5D: [Swiss city on the Rhine]) and TURIN have to offer (50D: [The Shroud of _____]). There is also URAL to complete the Euro geography (28A: [Russian river]). Very interesting to see both a former New York Yankee, ALFONSO Soriano, and a former Boston Red Sox player, BIG PAPI in the grid, showing that eternal rivals can indeed share the same space amicably. Maybe.

“Sports will make you smarter” moment of the day: DELE (2D: [Takeout order?]) – One of the best young soccer players in the world, 22-year-old DELE Alli currently plays as a midfielder at English Premier League side Tottenham Hotspur as well as on the England national soccer team. In 2016 and 2017, Dele won the Professional Footballers’ Association (PFA) Young Player of the Year Award, given to the player voted to be the best player in the Premier League who started the season at 23 years of age or younger. The 2017 award made Alli just the fourth player to win the PFA Young Player award twice, joining three legends of the Premier League: Ryan Giggs (Manchester United), Robbie Fowler (Liverpool) and Wayne Rooney (Manchester United).

Thank you very much for your time, everybody! Have a great rest of your Tuesday and, as always, keep solving!

This puzzle was mayor fun! 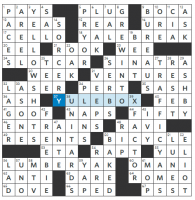 3D: YELLOW SHOTS [Photos of bananas and lemons?]
18A: YALE BREAK [Time between semesters in New Haven?]
27A: TRAFFIC YAMS [Thanksgiving vegetables smuggled like drugs?] – This feels like it should be trafficked yams, no?
37A: YULE BOX [Christmas present?] – I wanted this base word to be jukebox instead of jewel box(?) for too long, but I had no clue what a yuke was!
56A: LUMBER YAK [Shaggy ox used to carry logs?] – I bet that ox is part of a practical yoke! :D

Quick review today because the pre-Thanksgiving push at work is real! This puzzle had lots of fun J -> Y themers in here and even a few that made me chuckle. I appreciated that the J->Y substitution happened at the start of a word each time and that there was a 3/2 balance among the themers of whether the sub out happened at the start of the first vs. second themer word. I also appreciated the relatively clean grid and I’m torn on whether I like the ASH / SASH / ASHBY cluster at the equator of the puzzle.

#includemorewomen: Just about 12 hours to go on the amazing Inkubator Kickstarter! They just topped $30,000 on an original $10,000 goal – wow! Based on the sample puzzles they’ve already put out, this is going to be an amazing regular stream of fantastic puzzles by women and other non-male constructors. SOOOOO excited! Get in now to lock in a subscription for yourself! 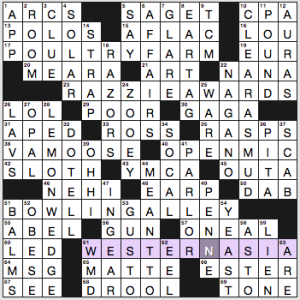 And the run of Tuesday puzzles with a Thanksgiving-adjacent theme continues! Liz had her feast, Aaron also had some YAMS, and Zhouqin brings all the different preparations of turkey:

Can’t think of other “turkey” meanings that Zhouqin has omitted, so it’s a solid theme. What other languages have words that are spelled and pronounced exactly the same but have so many distinct meanings?

Okay, this one threw me: 68a. [Baby wipe target]. Given that “baby wipes” are a known thing—pre-moistened disposable cloths for wiping things that need a wet wipe—when I had ***OL, I said, “Oh, no. Oh, no. It’s STOOL, isn’t it?” But no, the answer was DROOL, which would be something on a baby that you might wipe, but with a dry cloth more than with a baby wipe. I guess the clue is to be parsed as “baby-adjacent target for wiping,” but man oh man, nope. I don’t think the constructor or any of the three gents on the editorial squad have kids, so … 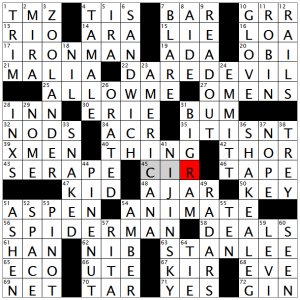 A fitting tribute puzzle this week honoring a man who died recently that has arguably had one of the biggest influences on pop culture in the WORLD. Overstated? Maybe, until you see who it is:

Yes, the venerable comic book icon Stan Lee passed away on November 12 at the ripe old age of 95; he would have turned 96 in December. The co-creators mentioned above was usually Jack Kirby or Steve Ditko, familiar names to comic fans. Why do I say Stan Lee has had an extreme influence on pop culture? Because comic books, however maligned, were a main entertainment source for  years in the middle of the 20th century, and now, in the digital age, the Marvel franchise of movies has grossed literally billions of dollars, making it one of the most successful franchises in history, and actually THE best according to this article. Say what you want about films that get Oscar buzz, but the ones that make money are the ones that people that aren’t moviegoers go to see, and people that grew up on comic books (like me!) go see comic book movies. The DC franchise (Superman, Batman, the Justice League, etc.) is finally making decent movies now, and those are becoming quite successful as well. But virtually EVERYONE has seen the latest Avengers movie, and that is full of Stan Lee characters. Point made. Nice tribute puzzle, Matt! 4.5 stars. 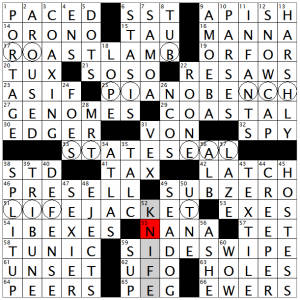 Is our constructor thinking of committing a crime soon?

I hope Craig is not getting sticky fingers! There is nothing worse than getting caught shoplifting. At Wal-Mart. For something cheap. It’s not worth it! I think this theme is referring to the four crimes (rob, pinch, steal and lift) as being on the “sides” of the theme answers. I guess it works. It’s Tuesday. We don’t want to be too confusing. Is this what those young kids mean when they say a puzzle “Tuezed?” 4.3 stars from me.