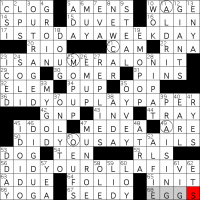 hello and welcome to episode #546 of matt gaffney’s weekly crossword contest, “What Are the Odds?”. for this week 3 puzzle, matt challenges us to name a 5-letter proper noun. what are the theme answers? there are five long across answers that are yes/no questions:

before i’d really had a chance to work on the meta myself (i spent most of the middle of the day friday watching chess), andy kravis pinged me and asked me if i wanted to co-solve. so i solved this with andy, even though in retrospect, it seems like the kind of thing either of us could have done on our own.

the first obvious thing to do is answer the question in the title: what are the odds? each question relates to the probability of some random event, so it’s a matter of just calculating the odds. we’re going to make the default assumption that each of the possible outcomes is equally likely, even though in some cases that doesn’t necessarily has to be the case (in particular, your strategy in calling coinflips or playing roshambo doesn’t have to be balanced).

once we’ve got all the odds written down, the next step is not too tough: for 2 to 5, just circle box 25 in the grid, and then similarly 49, 21, 11, and 51. i’ve circled them in the screenshot above, and reading off the letters in those squares in that order gives MACAO, which is a 5-letter proper noun. and as it’s the gambling capital of the world, macao is a very apt answer for a meta about betting odds.

i liked this meta. the mechanism is pretty much given away by the title, which seems like it might be more suitable for a week 1 or 2 puzzle. but exactly how betting odds work is not quite common enough knowledge for a week 1 or 2 (even if it is lookupable), so the week 3 placement seems just about right.

speaking of not quite common knowledge gambling terms, {Loan shark’s charge} VIG (short form of “vigorish”) is a term i only know from gambling.