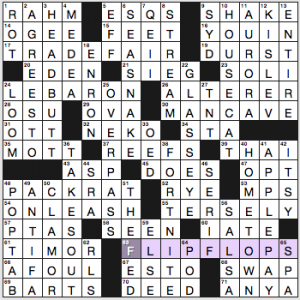 I think this is a debut puzzle, and I really wish someone had advised the constructor to be a little less ambitious. Ten thematic answers and a 76-word grid with wide-open corners … and here we have too much iffy fill for my taste. I’d much rather have four themers plus a revealer, or five themers without, and more breathing room for smoother fill. Brandon, you show definite talent here, and I think you can make a really smooth puzzle if you rein in that urge to pack the puzzle with theme.

I like the theme idea: FLIP-FLOPS are 63a. [Questionable political moves suggested by the answers to the nine starred clues], and those nine answers are legit phrases or compound words made by flip-flopping the two halves of what’s clued. For example, 17a. [*Principle of international economic pacts] clues FAIR TRADE but the entry is a TRADE FAIR, which is sort of a business expo. And 40d. [*Residence in a row] clues TOWNHOME but the answer is HOMETOWN. MAN CAVE, PACKRAT, HEAD-BUTT, TAKES OUT, OVERPASS, GLASS EYE, and HOUSECAT are the other themers. There are a bunch of other non-theme answers that are also 7 or 8 letters long, which makes it a little harder to zoom in on the *ed themers. APPLE PAY and the game FORTNITE were crisp new(ish) entries, though.

In the debit column, we have SIEG, clued as [Victory, in German], but quite tasteless in a society where anti-Semitism and neo-Nazism are ascendant. (49d ANTIFA is fighting these forces.) I was so jarred to find SIEG in the grid, I literally stopped solving and, for a few long moments, contemplated just not continuing the puzzle. (Left the clock running on solving time.) Yes, it’s a German vocab word, but it’s one that most Americans who haven’t studied German know only from the “Sieg Heil” Nazi salute.

Thanksgiving festivities are almost here, and AES reminds us to make sure our drinkware is ready to go.

The grid has left-right symmetry; that’s the first thing you notice. The second thing you might notice is that huge cup-shaped group of blocks in the center. You might notice that, but I didn’t. I was thinking of something else (I’ll get to that in a minute), and I somehow skipped the title.

The rest of the theme is made up of people, fictional or not, who might see that cup as something in particular. 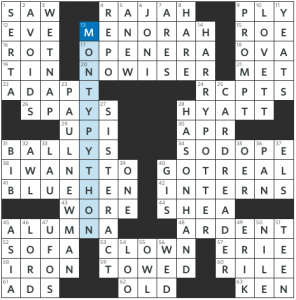 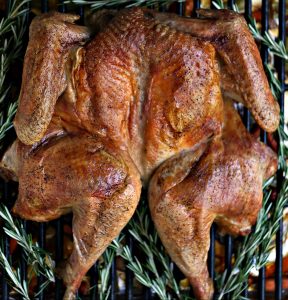 I guess since I’m none of these people, I didn’t see any of those things. I didn’t even really see the cup, as I said. Right before I did this puzzle I was watching videos about how to spatchcock a turkey, what with the impending holiday. So me, I saw a spatchcocked turkey which included both the upper and lower sets of blocks in the grid. Right? You see it too, now, right? Don’t lie to me.

How did the rest of the grid treat you? Mostly good, I’d say, but there are a couple questionables. I like SISTER ACT and HAS ON HAND, but their placement sure has them looking like they’d be theme entries. Also good: MENORAH, OPEN ERA, NO WISER, GOT REAL, and BLUE HEN.

SO DOPE [Way cool] doesn’t sound so dope to me. It sounds either dated or just not in-the-language. But then, I’m not one who’s up on the latest slang. I WANT TO [“Count me in!”] also feels off, and it was tough to parse with the crossing AWL [Gimlet’s cousin] and LAU [Batting coach Charley, who wrote “The Art of Hitting .300”].

The rest of the grid felt pretty clean and smooth.

But for me, CARD READER is a serious outlier since it’s so inconsistent with the others. I’m good with the theme idea and the construction in general, but I think that one needed a replacement. 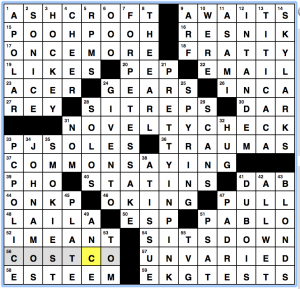 It’s a themeless week at the AVCX, which is great as someone who’s in the midst of holiday travel.  This one was a Byron Walden themeless, which meant that it was off of my usual wavelength and gave me way more to chew on than usual without the footholds I needed. 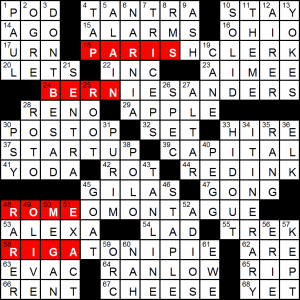 STARTUP/CAPITAL has a few new wrinkles on a frequently mined theme source – capitals, particularly European ones. It has a clever revealer, and I don’t recall seeing them hidden at the beginnings before either. We get two full names, political BERNIESANDERS and fictional ROMEOMONTAGUE (who is more usually represented mononymously). I’ve never heard of a RIGATONIPIE but it Googles well; I may try making one, which I have done with other unfamiliar cuisine items…

Not too much other splashy stuff, CC often manages to fit quite a lot of other lively answers. [Amazon Echo’s voice assistant], ALEXA is modern, but feels like will get overused, fast… On the other hand, very little in the way of weird abbreviations, plurals and the like, a squeaky clean grid.