No WSJ today, and no Fireball this week because of Thanksgiving. 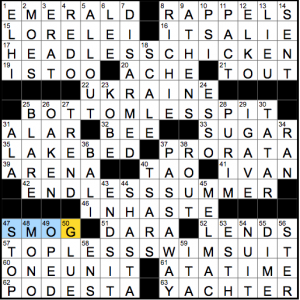 First of all, Happy 25th Puzzleversary to Will Shortz! 25 years ago yesterday, this Peter Gordon puzzle became the first Shortz-edited puzzle to run in the New York Times. Of the four editors of the NYT puzzle, only Margaret Farrar (1942-1969) has held the job longer, but because the puzzle only went daily in 1950, Will Shortz has edited the most NYT crosswords (at over 9000!).

So let’s talk about this Randolph Ross puzzle, shall we? Each of the theme clues is a word in ALL CAPS with one letter chopped off. Those clues are wacky representations of the four theme phrases, as will become clear:

I like this theme idea, and I especially like the consistency of the execution. The clues are all six-letter words where exactly one letter has been removed, and four different directions (head, end, top, bottom) are represented. As I mentioned above, some of the theme phrases didn’t thrill me, which detracted from my overall enjoyment of the puzzle.

The grid is an ambitious 70 words, plus the grid pattern is severely restricted by the fact that the theme answers are two 15s and two 13s. The fill suffered accordingly. No entries stood out to me as exceptional, and the SE corner (ESTH, NUIT, -STER, -ITA) was particularly rough.

A hearty meh from me. Until next time! 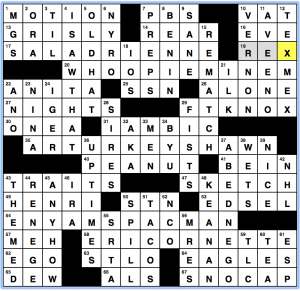 It’s Thanksgiving!  You’re all off with family or, like me, celebrating with family tomorrow and binging all of MST3k: The Gauntlet today, so let’s keep this brief.  BEQ invited a bunch of people over for friendsgiving!

Pretty straightforward – each of these pairs of names conceals a Thanksgiving food. 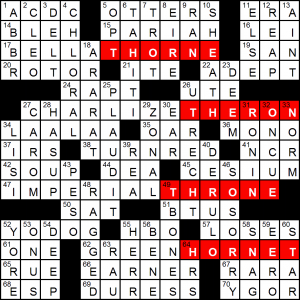 Quite an impressive anagram find this one. Four six letter sets without an ‘S’ – THORNE / THERON / THRONE and HORNET. Also the first time I think I’ve seen CHARLIZETHERON as a full name, so big ups there.

I finished on IRS / LISI. The [Returns home?] clue is brilliant and baffled me. I also don’t recall meeting old actress Virna LISI (could be LISI Virna? No, Virna LISI.) YODOG is something I haven’t seen in a puzzle before, I think. It looks deliberately chosen to spruce up the quiet bottom corner. I like geography answers, so UTRECHT made me smile. Some of you may have struggled, and I think it was locked into the grid early, because it is one of many answers crossing two themers today.