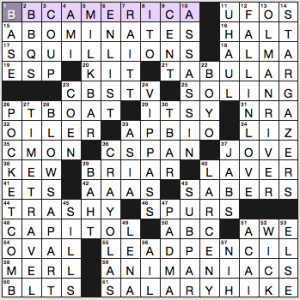 First off, let me object to 17a. [Ginormous quantities], SQUILLIONS. That’s so much less common than zillions, jillions, bajillions, gazillions. I guess people out there use it, but I wasn’t expecting it.

3.4 stars from me. Hope y’all had a good Thanksgiving! Pass the Tums. 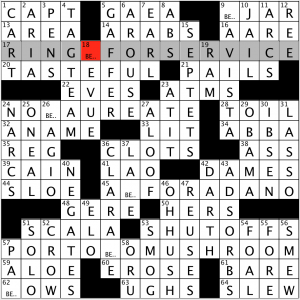 Woah this is late and will be quite short — sorry, friends! I’ve been digesting and napping. Also, Richard Shlakman isn’t in our tag library, so I think this is a debut. Congrats, Richard! Rebus time today, as the word BELL is compressed into six squares:

All good finds, though I would’ve thought it a bit more challenging if BELL had been hidden orthographically in all the answers (as in 24a) rather than as a separate word. 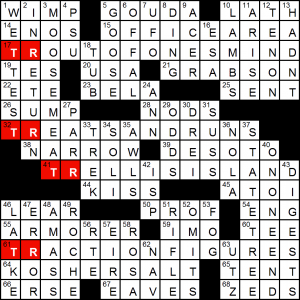 Another Friday, another letter addition theme. Today features the bigram TR, always at the beginning, with no revealer. It’s curious that, with such a loosely defined theme, the two middle answers are 13s. I guess the author really liked TREATSANDRUNS and TRELLISISLAND.

Those central 13’s lead to unusual grid architecture, with MOOSEMEAT and STATETREE spanning three answers each, and a second large themeless-style stack segmented in the top-right and bottom-left. The overall word count of 72 is at the upper end for a themeless.