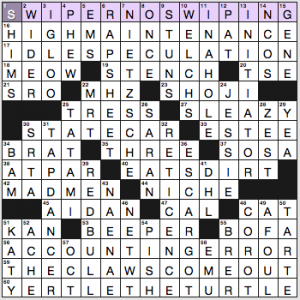 This Saturday puzzle played like a Friday for me, despite a handful of entries that weren’t coming to mind without crossings. Seemed a bit smoother than I expect from most grids with triple-stacked 15s.

ZB brings us this fun Saturday-sized romp. She cleverly takes two-word phrases in which the first word ends in -ER and converts that word to a comparative by adding a strategically-placed letter I. 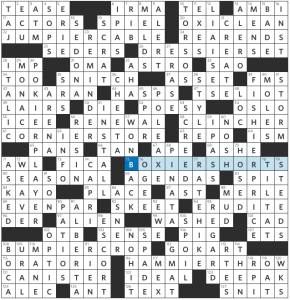 If I have one nit with the theme, it’s that the clues felt verbose. The SpongeBob one is short and sweet, but the others felt needlessly drawn out. Maybe it’s just me. But once I knew what was going on, I basically just scanned each clue to get the gist of it and went from there.

Likes: OXICLEAN, REAR ENDS, ORATORIO, CANISTER, RATE HIKE, POLEAXE, ERUDITE, CLINCHER, SEASONAL, T.S. ELIOT. There are loads of 6s and 7s in the grid, and all of them are solid if not good.

There’s very little to complain about, as usual with Zhouqin. Some might have trouble with OMA [Granny, in Munich] crossing both SEDONA [Resort known for its red rocks] and SCRAT [Saber-toothed squirrel in “Ice Age”]. I’m not seeing any other obvious trouble spots.

Good puzzle all around. 3.8 stars. And now for the Trim Jeans Theatre (Monty Python) production of “Murder in the Cathedral.” 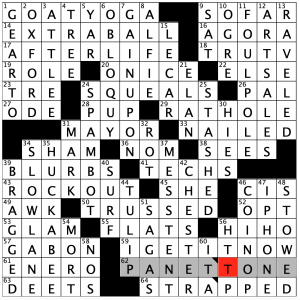 My friend Kyle has been cranking out some puzzles lately, and today’s LAT Saturday is another stellar production. Yes, there are error marks in the grid, and yes, I did learn a new word and maybe a new factoid or two. Some of these entries literally made me smile broadly, and that is part of the joy of crosswording! A robust 4.7 stars from me for this gem.

Some of those happy-inducing moments: 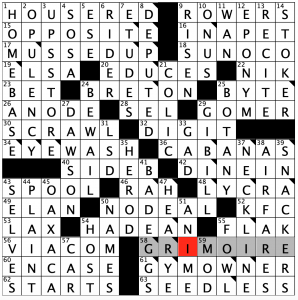 I recently saw the movie Puzzle starring Kelly Macdonald and Irrfan Khan. As a puzzler, the trailer grabbed me because it made a great definition of why puzzles are fun for me. The entire movie made two related points:

The movie is about much more than this, so feel free to watch it if you like. I would describe it more as Macdonald’s character on a journey to find out who she really is.

Anyway, I thought about that movie after solving this puzzle. This one I found HARD, but I also didn’t have a suitable quiet environment to solve in. Also, my mind gets agitated when I don’t have it solved in time to comfortably do the writeup. Most puzzles can be completed in a very short span of time, but not some of these tougher Stumpers. Yes, you can see a plethora of error marks in this grid. Between a word or two that I just didn’t know to a couple of dastardly clues, I was wallowing for a while. I am actually surprised I finished in less than 30 minutes; it wasn’t looking good for a long time! Another example of joyful agony of solving produced by Brad, and yes, I winced a little when I saw his byline! 4.6 stars today.

Puzzle highlights for me: