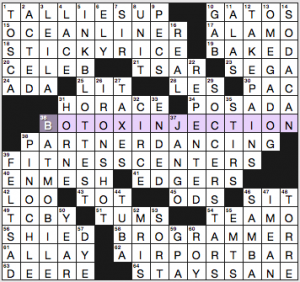 The constructor has stretched the grid to a 16-square width to accommodate a staggered triple-stack of 14s with no short (3-4 letters) crossings and some nice corner stacks. The center of the grid’s pretty, with the undulating wave of white squares.

Our theme is existing phrases re-imagined with respect to home ownership. 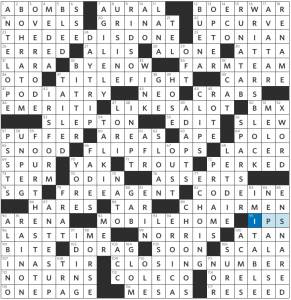 There’s so much theme material that there’s little room for long non-theme fill. I do like BOER WAR, FARM TEAM, ANTELOPE, CHRONOS, ANTES UP, and PODIATRY. I’m not so sure if BOHR ATOM [Model used in physics class] is a legit phrase. I’ve had physics classes, but I’m no physicist, and I don’t recall what makes a BOHR ATOM more notable than just a plain old run-of-the-mill atom. Physicists, what say you?

There’s a good bit of crosswordese: ANO, OTO, ALIS, AT AN, etc., and the roll-your-own duo of OPTER and LACER. Plural PSSTS is just plain ridiculous.

But there’s one even worse offense (IMHO): IPS [Tape measure: Abbr.]. I’m still not even sure what this is after. Instructions Per Second? Inches Per Second? Something else? It didn’t help that it crossed the very uncommon IMITABLE [Qualifying as a role model] (which I wanted to be INIMITABLE). Making matters more difficult for me was that I had LET LIE at 68d [Drop, as an argument] which I never went back and questioned because I was sure it was right. This made 82a [Cough syrup ingredient] look like COLE_NE. I’m not too up on my cough syrup ingredients, so I just assumed this was something I didn’t know. In the end, I finished with three errors in that section. I should have been able to get CODEINE; that’s on me. But IMITABLE crossing IPS is rough and warrants a re-tooling of that section as I see it.

In the end, my view of the grid is colored by those distasteful elements. The theme is good as is much of the fill, but I feel some of those questionable entries should have been excised. 2.9 stars. 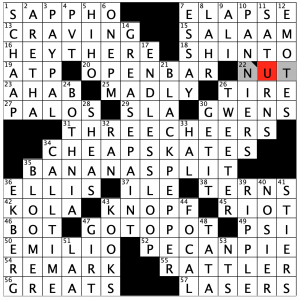 A tad tough! Frederick J. Healy is a new byline to me, or at the very least a constructor I am not familiar with, so this one took a tick longer than normal, but still cracked in just about 8 minutes. Kudos for the stacked 11s criss-crossing in the middle of the grid. This is a stellar 66-word grid that was a blast to solve. A solid 4.8 stars from me today.

I thought I had this one quickly. I raced through about 80% of this puzzle in like 6 minutes, but that NW corner absolutely killed me. 1-Across did not come very quickly, and it was nearly the very last entry I filled in. What started as a possible 8 minute solve turned into a nearly 20-minute slog. As is usually the case, everything is fair, but suffice it to say I learned a new word or two, which I will be sure and mention below. Battered and bruised by a Stumper that, at least in one corner, was anything but “Les Ruff!” 4.4 stars today.

I need a nap now!