I truly hope solvers took the time to suss out the meta for this, because it’s pretty darn cool.

THEME: The Little Things in Life 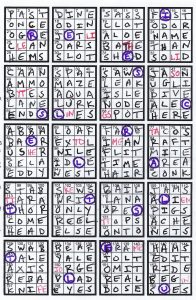 Seems a tad daunting, given that there are both rebus squares and circled letters in each of the 20 grids- and the idea of rearranging 20 different grids sounds tedious. But the payoff is worth it.

Across–  “AIN’T NOTHING IN THE WHOLE WIDE WORLD LIKE THE PEACE THAT I HAVE FOUND IN THE LITTLE THINGS AND THE JOY THEY BRING.” -INDIA.ARIE

Down- “YOU NEED TO LET THE LITTLE THINGS THAT WOULD ORDINARILY BORE YOU SUDDENLY THRILL YOU.” -ANDY WARHOL 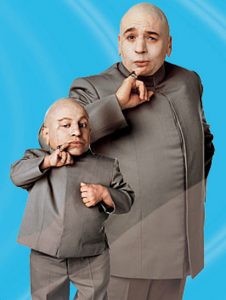 The ideal solving team for this puzzle.

If you’re anything like me, you skipped over Part II once the message in the circled letters was uncovered. But while that hint wasn’t by any means “necessary,” it certainly enhanced the overall meta and the required rebus square was fun to find during the solve.

Some time ago, Evan offered another meta variety puzzle that blew me away. At the end of my write-up, I wondered how he would meet the bar he set with that construction. Well… he did. And perhaps he raised it even more. This is fantastic construction. Never mind the fact that he found two quotes with a similar sentiment that use exactly the right number of letters with citations included (see Evan’s note at bottom of write-up). The cluing was spot on and I never suspected there was a message hidden in the clues themselves. Often, when using the first-letter-in-clue gimmick, the wording can seem somewhat forced. Not here. 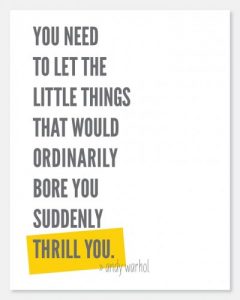 And, of course, each of the grids was clean. Why would you expect anything less?

I must confess that it took some time for me to put the grids in proper order. I spent 30 frustrating minutes trying to anagram the circled letters with no rationale (all the time knowing that Evan would never ask this of a solver) and wound up with FIRST LETTERS ELCASLUL. Those last 8 letters stumped me. It wasn’t until I wrote over each circled letter in a different colored pen that I noticed my hand moving to a different spot in the grid each time. Silly me. I should’ve noticed sooner.

Unfortunately, solvers who don’t bother with the meta are going to experience a puzzle that seems just fine- leaving them with a “So what?” feeling- as there is nothing particularly challenging about the grids as stand-alone puzzles. Some will no doubt be annoyed by the rebus squares or complain that their Sunday was marred because the constructor dared to do something different. That’s a bummer.

If you fall in that category, I’d ask you to just take a moment to appreciate the work that went into this before you invariably click one star in the ratings. It’s the little things- like solving a unique puzzle on a Sunday- that should suddenly thrill us.

I asked Evan if he wouldn’t mind describing some challenges he met in creating this week’s puzzle. Here is a portion of what he sent:

The puzzle itself went through several phases and I gave it a major overhaul after test-solvers looked at it. I don’t know how long I spent looking for suitable quotes that could fit with the right number of letters. I nearly settled on this quote from Alexandra Adornetto’s book “Halo” to be the 40-letter rebus element, but I pulled back on that for reasons I don’t remember. Maybe it’s because I’d have had to fit in HALO somewhere in one of the grids as like a revealer when fitting around the rebus letters might have been tough, or maybe the rebus bigrams themselves weren’t ideal. Anyway, that was the only “little things” quote from any source I could find that fit nicely into 40 letters without chopping it up or deleting words here or there to make it fit, so it felt like a lucky find whether I used it or not. The song lyric by India.Arie and the quote by Andy Warhol felt like unlucky finds at first until I realized that adding their names made it all work.

A solid 5 stars for the meta and construction.

And of course, this: 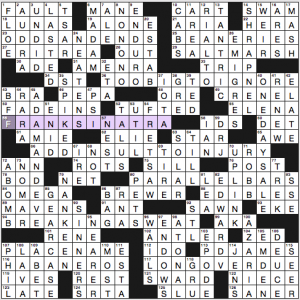 I love the theme! Sort of a “solve this rebus puzzle,” outside-the-box thinking, creative challenge.

I like that the solver has to take a different approach to unraveling each themer. I hope you all enjoyed the process, too! But I can imagine that the puzzle pissed off people who prefer the more customary sorts of wordplay.

There wasn’t a whole lot that I really liked in the fill, and plenty that felt difficult and/or clunky. 4.5 stars for the theme, 3.25 for the fill. 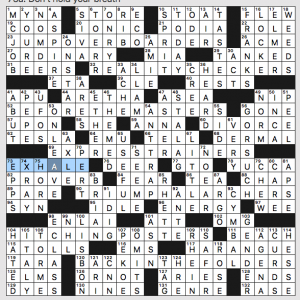 Is this George Telfer’s debut? We didn’t have a tag for him, so I think so (at least in the puzzles we review). This puzzle could also be titled “Hang-ers On.” Each theme entry has an extra “ers” hanging on a base phrase.

This is a solid, consistent theme. None of the entries are particularly amusing but they’re not boring, either.

What I didn’t know before I did this puzzle: I’d never heard of the INCA ruler Huáscar.

Here we have a 130-word crossword without a theme. It’s a toughie, as CRookeds go, but it does have its fun aspects. I liked:

8a [*NSYNC member] ASTERISK–Clever clue, to which I’d like to add a pronunciation footnote: “The second S in this word is not silent and it’s not at the end!” I doubt a single reader of this review needs that information.

16d EDGES OUT and 17d  YOUR MOVE are good, solid ILSA’s and feel somehow related, through their tone of competition.

Speaking of ILSA’s, there’s nothing wrong with 57a PARADE REST,
3d KAMALA HARRIS, 74a COME NOW, or 21a SEAQUAKE.

I like 44d FACETIOUS, in which five vowels appear alphabetically in a 9-letter word.