I like this puzzle, although it’s not as Monday-smooth as many of Lynn’s.

There’s something similar about each theme entry.

What I didn’t know before I did this puzzle: see above re: LE CID.

Each theme answer is a big-name woman with the letters EGO spanning their two names. I really enjoyed this theme because I didn’t know where it was going until I got the revealer. You don’t often have such a fun a-ha moment on a Monday, but I did this time.

I love the consistency in having all women as theme entries in keeping with the title. Not that I think women suffer more from egocentrism (quite the opposite), but it makes sense with the title. And since women are generally under-represented in puzzles, this felt really, really good.

The fill is way above AVERAGE as well. Okay, CAGINESS is rather blah, but I love TELENOVELA, “POOR DEAR,” ODD NUMBERS, ARIADNE, and that central vertical stack of GELATO, DOLORES, and OOLONG, even if it comes at the cost of ARNO. Oh, and MARIOS and DORIAN are representing for the men-folk.

All in all, a really lovely Monday outing with a surprising theme and beautiful fill, even if the names throughout are fairly dated. 4 stars from me.

Put on your favorite Bee Gees record and settle in! 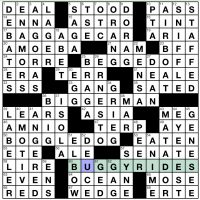 17A: BAGGAGE CAR [Passenger train’s suitcase carrier]
25A: BEGGED OFF [Turned down an invitation]
36A: BIGGER MAN [Guy acting more maturely]
50A: BOGGLE DOG [Cross between a Boston terrier or boxer and a beagle]
60A: BUGGY RIDES [Carriage outings]

I’m a sucker for themes like this – I love when language has these types of parallels. I’d never heard of BEGGED OFF or BOGGLE DOG, but Google tells me that they are things.

This puzzle took me a minute than LA Times Mondays usually do, partly because of a few pieces of tougher fill: ENNA, BRAGA, ISOLA, as well as the GENESEE/MOSE/ERTE section in the SE corner of the grid. Otherwise, the grid was largely smooth. I appreciated the inclusion of Zora NEALE Hurston, MEG Ryan, and Sonia BRAGA. Even things like AMNIO and cluing ERA with respect to a woman is a small but meaningful way to represent the contributions of women to society!

Here we have a 70-word themeless that did not crush my brain bones. Twenty-one minutes, roughly, with smooth sailing, save the intersection of two long answers I had never heard of:

An uber cool puzzle, all in all, with the following positives, for sure:

I don’t suppose I can close without acknowledging 49a VIC, even though I’ve not heard of the guy in the clue, [Stand-up comic DiBitetto].

Joon is taking the day off, so I volunteered. By the time the opportunity arose, I had solved using both Across and Down clues. However, I did solve for 30 minutes with my left hand and 5 minutes with my right. You should try it sometime. I was stuck with 10-12 boxes open when I switched the pencil from one hand to the other. Within a minute, I started cruising. My last box was the crossing of 40a [Stanislaw who wrote “Solaris”] LEM with 41d [Capital of Equatorial Guinea] MALABO.

This I found to be a totally cool puzzle, a frequent opinion that I have when my brain is not overstrained. The left-right hand-shift at the point where I got stuck felt just about right: ah, balance! Among the entries that got my attention are: I hope the rest of you enjoyed it as much as I did. 4.5 stars. Nice work, Kameron!