Every Friday, around midday, my metasolving group checks in regarding the week’s metas: who did the WSJ, what we’re thinking the MGWCC looks like given the difficulty rating, if there’s a Fireball contest, the MMMM, etc. This past Friday, some of us had already gotten the WSJ in preparation for a Week 5 MGWCC (which certainly measured 5 metaweeks on the Gaffney Scale, and it’s a real treat if you haven’t braved it yet). Reports sounded favorable, so I took a solving break at work, then screenshotted and printed the grid (my usual method of attack). 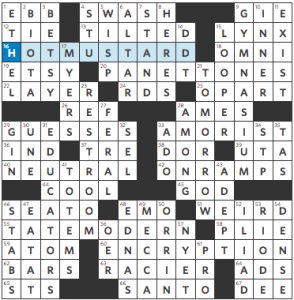 I stared and stared at the themers, trying to find something that related them to each other or to the parenthetical state abbreviations. But I wasn’t getting anywhere. So I asked for a lifeline. Still nothing. Okay, maybe try the shorter themers? The title is “Dropouts” and we’re looking for an eight-letter word; there are eight themers, so one would assume we’re getting one letter of that word from each. Drop a letter to make a new word? Something

related to the states indicated in the parentheses? Okay: LAYE, LAYR, LAER, LYER, AYER — I see nothing. WEIR, WEID, WERD, WIRD, EIRD — nope. NEUTRAL > NEURAL > LAUREN? — nope! Try reversing them? WERD > DREW. Yes, I was told, that is correct. But what does that have to do with New Jersey? Can I reverse anything else? LAER > REAL? Nope. What else, my interlocutor patiently asked, could you possibly do with a string of letters to make a word? C’mon Laura! And then —

NOTE: The following screenshot contains a few rather colorful examples of profanity and our more sensitive listeners may wish to exercise discretion.

If you’ve been reading Fiend for a while, you know that those of us who blog metas don’t always get them, and we’re not ashamed of posting a DNF. Even when I get a meta, sometimes I’ll miss some subtlety that commenters helpfully (and most gleefully) point out. So I’m offering this self-own to all of you as a way to say: These puzzles can be frustrating and tough, even when other people find them easy; they can take time, and patience, and sometimes you feel so resentful — towards the puzzle or other solvers or those bloggers who seem to always know the answer — when you feel like you should be able to get something but you … just … can’t. In my case, here is a photo that recreates (I’m writing this blog post at home) what I was looking at in my office while I was trying to get this meta: 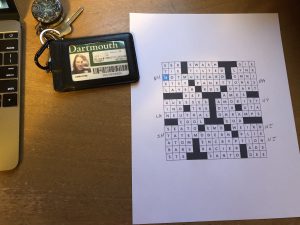 The word I was looking for — the name of the institution where I have worked as a librarian for the past fifteen years — was staring me in the face, not three inches from the puzzle entry. [Get to the meta solution already, Laura! Stop talking about yourself!]

Each entry has one letter that’s a dropout; anagram the remaining letters to get an institution of higher education located in the parenthetical state:

And there we have our eight-letter word: SORORITY. I only vaguely remembered that DREW was a university in New Jersey; also note that PENN STATE is Mike Shenk’s alma mater and TULANE just appeared in a Gaffney WSJ contest puzzle a few weeks ago. Also note, with some irony, that members of a SORORITY are somewhat less likely to become DROPOUTS than women college students who do not participate in their institutions’ Greek systems.

This was, for me, a HOT MUSTARD of a puzzle; I shall henceforth offer the Hot Mustard Prize for Most Colossal Brainfart on a Metapuzzle with compassion and camaraderie to all those who stumble flailingly into the foggy night of lateral reasoning.