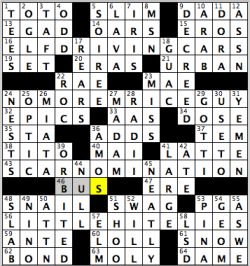 Hello, hello everyone! Hope the beginning to the last month of 2018 has gone well for you so far! Some of you may have already had some snowfall this fall, and today’s grid is all about snowfall..sorta. In the 14 x 15 grid, the four longest theme entries, all going across, are puns that are created by dropping one letter from the original phrase the pun is derived from. Going from top to bottom, those four letters omitted spell the word SNOW, which is also featured in the grid as the reveal (61A: [Winter “fall” suggested by the dropped letters in the four longest answers]).

I have one question to ask you all: Which is your favorite BOND movie and/or title song (62A: [Foe of Dr. No])? By a hair, I’m going with From Russia with Love as my favorite movie, but my favorite Bond title song is “Goldfinger” because Shirley Bassey’s voice is absolutely unreal!! Given a couple of the entries in the grid, it is hard not for me to think about the unthinkable atrocities and the civil war that continues to be waged in YEMEN (31D: [Nation on the Red Sea]) and all of the innocent ARAB citizens that have been victims because of it and/or the people working there trying to improve conditions for the people there (10D: [Qatar resident]). Just the other day, I saw a grown man sporting a DORA the Explorer backpack, one of a number of adults I’ve seen in a span of a few months who wear children’s backpacks and not accompanied by their children (11D: [TV explorer]). If that is the latest fad, count me out…unless I’m doing it for a good cause/executing a prank! Outside of the theme entries, no other entry really stood out, though I liked the biographical information about TAFT (3D: [Cincinnati-born president]). For those who are math savants, there’s GEOM (54D: [H.S. math class]) and RADII to float your boat (28D: [Spokes of a wheel]).

“Sports will make you smarter” moment of the day: AMOS (36D: [Hebrew prophet]) – Former Major League Baseball outfielder Amos Otis is best known as the centerfielder for the Kansas City Royals during the team’s dominance in the American League in the late 1970s and early 1980s. In a career spanning from 1967 to 1984, Amos batted .277 and had 1,077 RBI, and he also led the American League in doubles twice and in stolen bases once. He also batted .478 with three home runs in the 1980 World Series against the Philadelphia Phillies, as Amos became the first player in history to have at least one RBI in each of his first five World Series games.

We’re in for a “Tipple Threat” with today’s drunken puzzle! 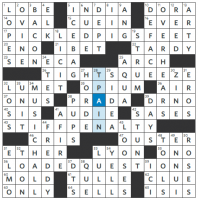 We have a fun set of fresh, in-the-language themers that each start with a synonym for drunk. My only ??? (which might not even be right) is that PICKLED, TIGHT, and LOADED are adjectives to describe a drunk person, whereas I’ve only ever heard STIFF as the noun version of drunk. I’m guessing I don’t get out enough and that STIFF, too, is used regularly in the adjective form. All the same, it was quite the fun and smooth Tuesday puzzle. (And that’s coming from someone who’s allergic to alcohol!)

(How can I go any further before referencing BEQ and Francis Heaney’s great crossword book, Drunk Crosswords. Check it out for more tipsy fun if you liked this puzzle!) 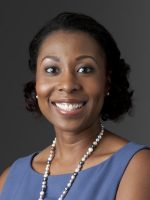 As you’d expect with BEQ, the grid is smooth and crisp (ZINE! <3), with very little crosswordese (other than the oddly-pluralized SASES). I super appreciated all of the women of color represented in this grid (DORA, AUDIE Cornish, ONO, ISIS) and even the men of color (CRIS Carter, ANG Lee, TPAIN). That’s the type of representation we can count on in a BEQ grid. 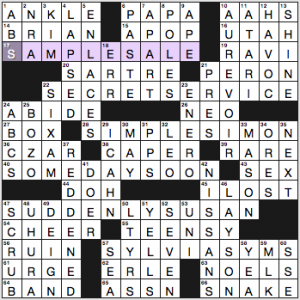 A straightforward vowel progression theme that goes all the way through Y—two-word phrases starting with S followed by A, E, I, O, U, and Y. 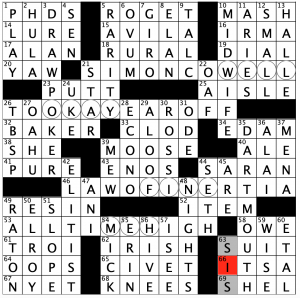 Someone is not having the greatest day! But at least it’s not a BAD day!

Do these get progressively worse, even in a gradual, ever so slight way? Again, at least no one is having a terrible day! And how can it be a terrible day when one is solving a crossword puzzle? If solving a puzzle makes a good day, then I haven’t had a bad day literally in years. 4.2 stars. 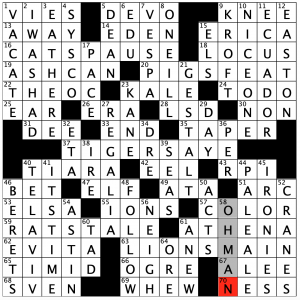 It’s a zoo in here today! Time for some homonym fun with cartoon animals and well known phrases:

This is not the first collaboration I have reviewed from this pair; I believe this is at least the third puzzle I have seen with this byline. All have been very well done. This is a puzzle that you could easily introduce someone to puzzles with. 4.4 stars today.