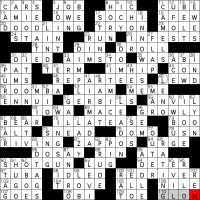 hello and welcome to episode #548 of matt gaffney’s weekly crossword contest, “Shell Game”. for this week 5 puzzle, we have a special guest contribution from xan vongsathorn, involving an elaborate setup about the puzzle sitting in matt’s yard for seven years (perhaps a reference to this nyt puzzle), and something about sweets and rotting eggs. for a final answer, xan asks us to figure out a piece of stolen candy, plus the culprit who stole it. okay. what are the theme answers? there’s one starred clue: {*Make rotten, as eggs} ADDLE. i was not familiar with this definition of ADDLE, but indeed it’s in the dictionary (although listed as outdated). what could it mean, though? well, let’s take a look at the other overt theme clues. seven of them get numbered steps in the grid and some weird capitalization:

okay, what now? this took me entirely too long to work out, and i probably did it in the wrong order since at first i didn’t even notice the ADDLE clue, but if you remove the capitalized L and E from each of these clues, you’re left with a different clue—and you can change the answer in the grid to fit that clue while still satisfying all of the crossing clues. (at this point i’m starting to think of this gimmick as particularly associated with xan. can we name it after him? i’m going to start calling it a xan.) take a look: 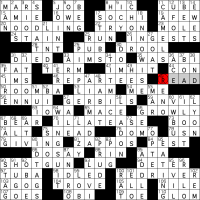 i’ve put the altered grid in the second screenshot at right. okay, so … what now? that’s where i’m at a loss. i’ve been looking at this for a few days and have made no progress from here in either figuring out the stolen candy or finding the culprit. but i’ve got 15 minutes left, so let’s use them.

what about those instructions? well, let’s see them: 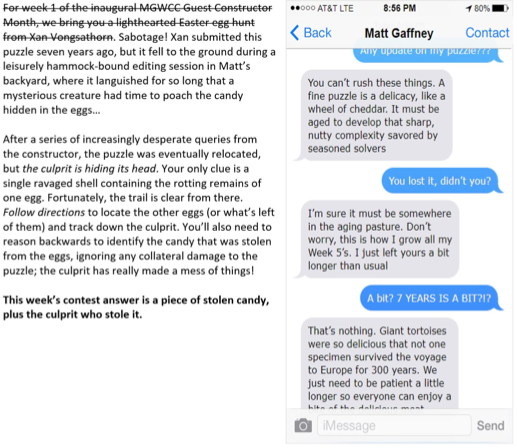 based on this, i think the second screenshot is supposed to be xan’s original grid, with the addLEd entries “making a mess” of the puzzle.

what’s the “single ravaged shell”? this presumably either refers to the *ed ADDLE clue, or the circled letter at 49 containing either L (in the puzzle we got) or R (in xan’s original grid). the italicized parts of the instructions, the culprit is hiding its head and follow directions, seem like they must be important.

what about the step numbers? i have no idea. they go up to 15, but there are only 7 of them, and they’re not even unique (there are two 11s).

welp, i’m out of time and i didn’t get it. let me know what i missed in the comments.