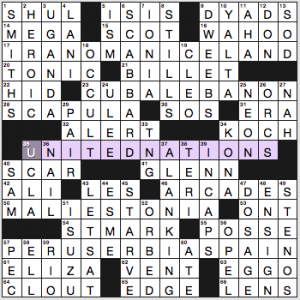 The puzzle seems ill-timed, since UNITED NATIONS is clued as 35a. [Organization honored on October 24 … and the theme of this puzzle]. Why mention the date for UN Day if the puzzle’s not running then? Lots of other ways to clue the term. Anyway—the theme answers are goofy phrases cobbled together by combining the names of countries, and then splitting them into different words.

I find myself wishing the UNITED NATIONS revealer had been scrapped, loosening up the grid so that it doesn’t include so much clunky fill. ORBED (52d. [Spherical]) is perhaps the worst offender. I do like IN CAPS, though. Does seem mildly odd to have UGANDA in the fill, given the theme. I enjoy geography-related themes, but the fill detracted from that wordplay today.

Proper nouns in the grid: ISIS SCOT KOCH GLENN ALI LES STMARK ELIZA EGGO SAM UGANDA RIO LANI ISUZU ULEE (!) ESME IONIA TNG ALANKING CLEO TERI YALTA KONA OPEL. What is that, 24? That’s way too many for the sake of the solvers who aren’t keen on puzzles that quiz them on names.

2.75 stars from me. Without the revealer jacking up the theme density, I think I’d have enjoyed this puzzle a lot more. 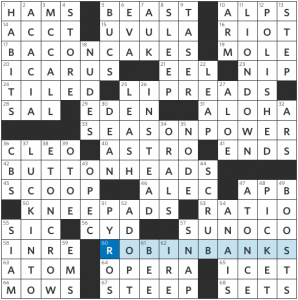 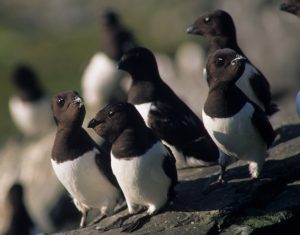 LUCK INTO, LIP READS, and KNEEPADS make for fine non-theme fill. I also like seeing ICARUS and ACACIA. I could really do without longtime crossword staples OTOE and INRE. The little AUK I don’t mind. It’s cute! 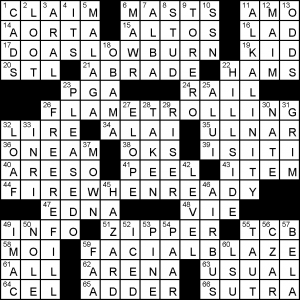 Four theme answers have a fire related word: BURN, FLAME, FIRE and BLAZE. Two of the four theme answers don’t seem to be real things. A FACIALBLAZE is just called a blaze. Googling “facial blaze” +horse gives you three-hundred odd hits the third of which is for this puzzle… FLAMETROLLING Googles slightly better, but for an internet phenomenon, not well at all. Pretty sure this is describing either FLAMING or TROLLING and putting them together like that is not a special thing.

The rest of the puzzle is clean and inoffensive. I appreciated not shoving crazy letters in those small corners… 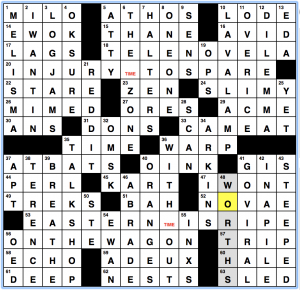 Another long workday means I just got to today’s AVCX, but it was worth the wait.  I had a hunch at what Erin Rhode was pointing to with her title for this week’s puzzle, “A Bit of a Mind Flip”, but the execution’s pretty great:

Each rebus square featuring TIME acts as a warp – INJURY TIME OUT starts in 20A and finishes at the end of 36D, EASTERN TIME ZONE starts at 53A and ends at 6D, and THE TIME IS RIPE and WITH TIME TO SPARE complete the down entries in similar fashion.

The construction on this, given the constraints, is pretty fantastic!  Nicely done, Erin.