NYT write-up will be a little late tonight. Feel free to chat about it in the comments!

I knew something was funky from the beginning, since 2d [Fair building] should be PAVILION, and it didn’t fit. It didn’t take long to figure out where the rebus was, and it was a lovely “aha” moment. That early start didn’t make the puzzle easy, because the rebus isn’t predictable.

1d, 2d, and 3d all have rebuses involving the final four letters: 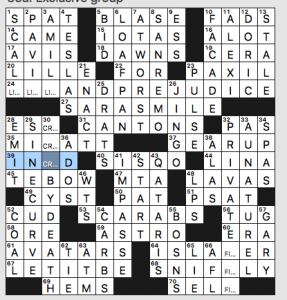 Crossing our three LIONs we have 24a [Novel with the line “Daughters are never of so much consequence to a father]. That’s PRIDE AND PREJUDICE, with the three LIONs comprising the PRIDE. I love collective nouns.

The third and last one took me a long time to suss out. I thought 32d [Choate, for one] was PREP SCHOOL, and that actually fits, but none of the crosses work. Hmm. I finally realized that 56a [Big jerk?] was TUG. Choate is also a PRIVATE SCHOOL. Ohhh.

In my own defense, SNIFFISHLY is a roll-your-own (albeit an inferrable and amusing one) and I’ve never heard of Ms. Fisher.

I enjoyed solving this puzzle and it made me feel smart. That’s a great combination.

What I didn’t know before I did this puzzle: see above re: SISQO and ISLA FISHER. I also didn’t know that Michael CERA played a man named Pilgrim in a movie in 2010.

Well that was clever!

I’m told this is a debut, and from the looks of it, not just at the WSJ, but in any of the big-name publications we follow. Congratulations, Jack!

He’s brought us a multi-layered treat. It started off at 1a/1d with this clue: [With 1-Down, “Let’s try this again!”]. The answers are TAKE / TWO. Ok. Not sure what to make of it yet, but I noted that this is almost synonymous with the title, “From the Top.”

Fast forward to the central revealer [Where thwarted people, or six of this puzzle’s answers, go]. I had a hard time parsing that unusual clue, but I eventually made sense of it. Of course, the answer is BACK TO SQUARE ONE.

Prior to that I had uncovered the first big theme answer at 20a BURNS AT THE S (clued as [Sentences for spelling?]). A-ha! Realizing the TAKE was missing, the revealer gave me the realization of what was going on. For six answers in this grid, you have to back to the beginning to get the last few letters / word.

What are the others? During the solve, I found SLOW ON THE UP (TAKE) (clued as [Dimwitted] and which I figured out based solely on the UP without even looking at the clue, thank you very much). But any other TAKE answers eluded me. What was going on? There should be four more.

But what’s this? At 7d with the clue [Bisect], we have the answer CUTS IN. It should really be CUTS IN TWO, though, shouldn’t it? A-ha again! There must be three Across answers that use TAKE, and three Down answers that use TWO. Nice!

The other Down themers are at 67d [When Macbeth stabs Duncan] and at 49d [Get extra food delivery predelivery, say]. 67d is ACT (TWO), but I couldn’t make much sense of that 49d clue. Finally I realized it wanted EAT FOR (TWO). Fun! 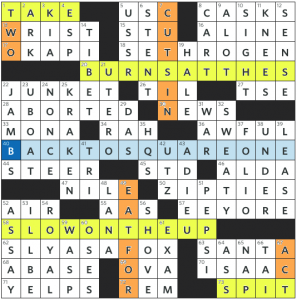 Well done, crossword completed, Mr. Happy Pencil, yadda yadda yadda. But there was still one more TAKE answer I hadn’t found. I went through each Across entry post-solve to find it. Finally, at the last, there it was at 73a [Comic eruption]. The final a-ha chimed when, what I thought was a nonsensical clue, made perfect sense, not as just SPIT, but as SPIT (TAKE).

Now I was satisfied and everything fell into place and was tied up with a bow. Bravo!

Whoa! I just realized everything is symmetrical in the grid, even the crossing themers in the center. Yoinks! Mind = blown.

But if that wasn’t enough, our debut constructor gives us great fill in SLY AS A FOX and SETH ROGEN. I also love the word JUNKET, which somehow is not a type of boat nor a dirty word, but instead means [Excursion]. Also good: ZIP TIES, EEYORE, and KRAKEN.

A beautiful debut grid with a wonderful theme, cleanly executed and with fantastic fill and clues to boot. An out-of-the-park homer in his first at-bat. 4.5 stars. 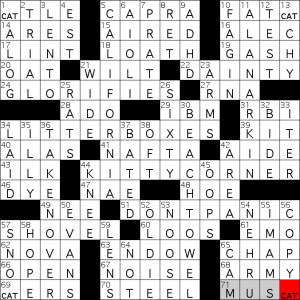 hello, joon here filling in while andy gets cultured. this is, as far as i can tell, a newspaper crossword debut for sophia maymudes, so congrats to her! however, it’s not the first puzzle of hers that i’ve solved, because she constructed a puzzle for this year’s indie 500 in collaboration with… andy kravis! so it’s either entirely apt or wholly inapt that i’m filling in for andy on blog duty.

sophia’s got a rebus puzzle for us this thursday, and it’s on the easy side. i’m not sure i’ve ever solved a rebus thursday faster than i did this puzzle. in part, it’s because the very first square is a rebus, and although i didn’t know the answer to 1a {Things driven on ranches} right away (first thought: HERD), i knew 1d {Mailing from Lands’ End or Williams-Sonoma} had to be CATALOG, and then 2d {High point of “To Kill a Mockingbird”} TRIAL located the T and gave me CATTLE for 1a. then i was off to the races.

finding the other three CAT rebus squares was even easier, because before i got to any of them, i came across the two extra theme answers: {Places where some house pets “go,” in both this puzzle and real life} LITTER BOXES and {Diagonally … or a hint to four of this puzzle’s squares} KITTYCORNER. (the latter word, by the way, is an interesting one. roger barkan once told me it has the most acceptable alternate spellings of any word in merriam-webster’s collegiate dictionary.) once i had that, it was straightforward to just fill in CAT in the other three corners and move on from there. those other three rebus squares:

i feel like the bar for rebus puzzles is higher than when i first started solving about 9-10 years ago; in those days you could probably just make a puzzle with a handful of CAT rebus squares, just because. but here, the two extra theme answers provide a raison d’être for the rebus. nice work!

the fill is really, really clean—impressive work for such a relatively new constructor. about the only thing that made me lift an eyebrow was {Poorly} ILLY; i feel like most everybody would just use ILL as an adverb there. i wonder if sophia clued it as the upscale coffee brand?

beyond that, although i didn’t notice it at the time, {Host} ARMY and {Regenerable parts of a sea star} ARMS is arguably a dupe, as ARMY ultimately derives from the latin armare “to arm”. then again, ARMS in the anatomical sense comes from dutch/german arm which just means that body part. so maybe it’s not a dupe? either way, it did not affect my solving enjoyment in any way, so perhaps it’s silly to even mention it.

things that did affect my enjoyment of the puzzle:

that’s all i’ve got. thanks for the puzzle, sophia, and congrats on a terrific debut! 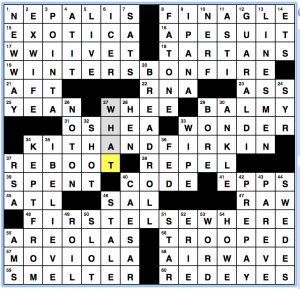 We’ve got a fairly straightforward BEQ Thursday leading us into the holiday season today:

Stick a FIR in it, we’re done.

The rest of the fill here is pretty solid – NEPALIS, APE SUIT, AIRWAVE, and MOVIEOLA were all nice.  YEAN looks off to me, but the dictionary assures me it is, in fact, A Thing. 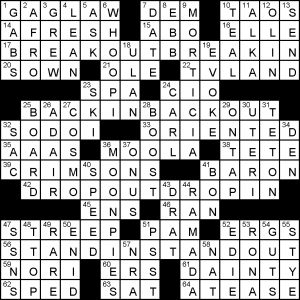 An interesting and clever, if quickly predictable theme today. Pairs of phrases with the same word and OUT/IN are combined and clued wackily. The four phrases alternate between OUT/IN and IN/OUT, making it a little tougher to predict. Clues are on point, except perhaps the hippie / drop-out connection, which felt a little tenuous.

Grid-spanning themes often leave little room for other flashy fill. I did like the opening clecho of [Free-speech inhibitor] crossing [Speaks freely] – subtle. [Jerry’s neighbor] for COSMO is a deep cut, since unlike the other characters, Kramer routinely goes by his surname not his given one.