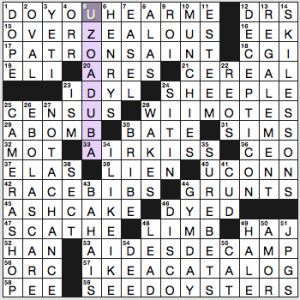 This 70-worder is filled with fresh entries. “DO YOU HEAR ME?” is maybe a little iffy (and is EBOLA SCARE really a thing?), but I really like SHEEPLE, PATRON SAINT, AIR KISS, RACE BIBS (these are the Tyvek sheets with a competitor’s number on them—my husband has a zillion from his past races and no, I don’t know why they call them “bibs” when they’re safety-pinned to a shirt), UCONN, IKEA CATALOG, “NOT A CHANCE,” UZO ADUBA, the MUNCHIES, GYM DAY, DECEPTICON, and SKI LESSONS (cute clue, [Higher education?]).

Are WIIMOTES getting much use these days? Not sure if the Wii successors use the same controllers. More importantly: If you have a Nintendo Switch, are you loving it?

Lots of cute clues here, along with the mostly zippy and/or solid fill. 4.25 stars from me. 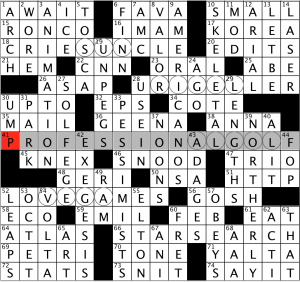 A hidden-word theme from AE-S, sixteen wide. Names of stars are embedded in base phrases, like so: 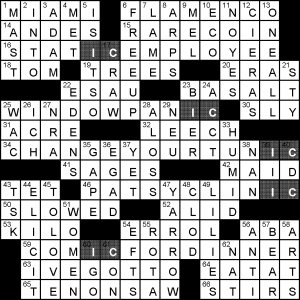 Not quite a letter addition Friday today, but in that vain. Words with trailing E’s have those changed to IC. No revealer, just a selection of entries, PATSYCLINIC being the best of the bunch. The rest, at least, are not overly strained. Okay, looking again, WINDOWPANIC is a bit, actually.

The theme is crammed in there, so not a lot of space for the puzzle to breathe. RARECOIN seemed a bit bland as an 8 initially, but the clecho between that and [Lively display of stamps?] for FLAMENCO more than compensated. The [Bust size?], KILO clue was also clever, though it does have that “boobs, hur hur” vibe that I have been also guilty of repeating…

The partials, particularly six-letter TOLOVE, and parallel German are among the most egregious examples of short fill that was generally stodgy, a symptom of the crowded grid.