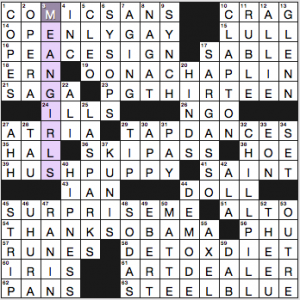 Sure, a SKI PASS is an ordinary thing for anyone equipped to go skiing, but when you smush the words together in the grid, I just keep seeing SKIP ASS. (See also: whenever the partial AT IT is in a grid.)

Top fill: The dreaded COMIC SANS font, OPENLY GAY (hello, out friends!), the classic PEACE SIGN, a tasty li’l HUSHPUPPY (although to be honest, I always find them a little disappointing—too oniony too often), “SURPRISE ME,” the “THANKS OBAMA” meme, the scientifically-a-crock-of-shit DETOX DIET, pretty STEEL BLUE, the movie MEAN GIRLS (sent up, sort of, in Ariana Grande’s “thank u, next” video), the L.A. SPARKS, the wild and crazy SARGASSO Sea, and a CHILL PILL. 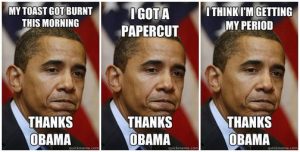 I’m not wild about OONA CHAPLIN getting the full-name treatment, because she’s not a household name in the US (maybe in Spain and the UK?). She’ll be in the Avatar sequels, but there’s a good chance she’ll be voicing (and/or motion-capturing) a CGI character. Also not keen on PG-13 having its numeral spelled out in PG THIRTEEN.

The title should be re-parsed as “Going Post-AL.” In other words, we’re adding AL to the ends of phrases. My first thought was, “What does Alabama have to do with this?” The answer is “nothing.” Postal abbreviations have nothing to do with it; it’s just a reparsing of the word “postal.” 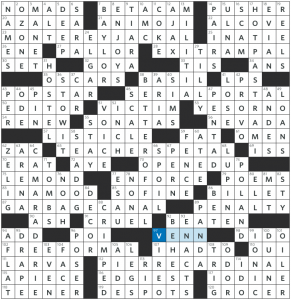 There’s plenty of interesting fill to look at. What did you think of BETACAM [Videorecorder from Sony]? That’s some old tech, if I’m not mistaken, unless they still call it that. More modernly, I loved the entries ANIMOJI [Talking unicorn, on an iPhone X] and LISTICLE [“7 Essential Leadership Lessons from Santa Claus,” e.g.] even though both clues were tough to get through.

HOT PASTRAMI [Katz’s Deli specialty] is fun and was easy for me since I believe I had it as fill in one of my own puzzles once. CAMARADERIE [Workplace boon] is also a fun word. Other goodies include: POP STAR, OPENED UP, “I HAD TO,” “STOW IT.” 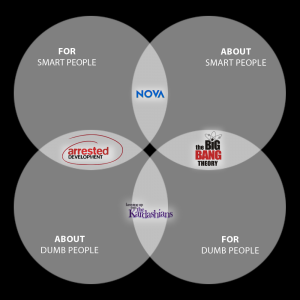 Some might Natick at the Z in ZELIG [1983 title role for Woody Allen] and ZAC [Country music’s ___ Brown Band]. I almost Naticked at the D in LEMOND [Three-time Tour de France champion Greg] and SEADOG [Tar]. I did Natick at the V in VIREO [Greenish songbird] and VENN [“Symbolic Logic” author John]. Don’t think I’ve heard of that bird, and I presume it was John VENN who gave us the diagram that sports his name. But I certainly didn’t figure that out until after the solve.

I didn’t much care for the IN A TIE / IN A MOOD combo, ANS clued as [Years, to Yves], nor the entry TEENER. 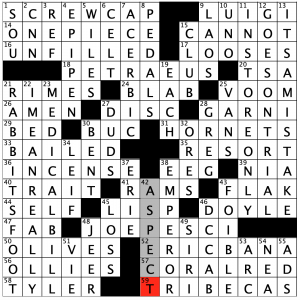 Another awesome puzzle by the prolific C.C. Burnikel. This 72-worder has tons of great fill, a couple of 11-letter stacks, and virtually no dreck. I solved this one fairly quickly, but it was a fun one. I still hope to meet this puzzle constructor some day! A solid 4.5 stars for this Saturday themeless. 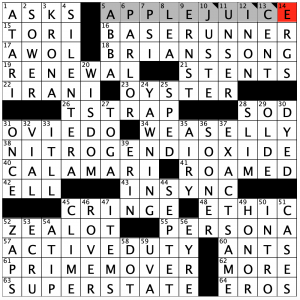 Wow. I did much better than I thought. I found some quiet time and most of the puzzle fell rather easily. I had a brain cramp at 5A (see below) but other than that this is one of the best times I have ever had for a Longo puzzle. I may actually be ready for the ACPT, which amazingly is not that far away!! Every time I get excited after one of my Stumper times, the next week is torture, so next week should be hideous. In the meantime, 4.6 stars for another Longo gem.

Everyone enjoy your weekend!