Amy’s out with her family and I’m pinch-hitting. Ross Trudeau is fast becoming one of my favorite constructors. This is a nice example of his work with a multi-pronged theme featuring cryptids. The Oxford Dictionary defines “cryptid” as “An animal whose existence or survival is disputed or unsubstantiated.” We have three, each cross-referenced to its purported location: 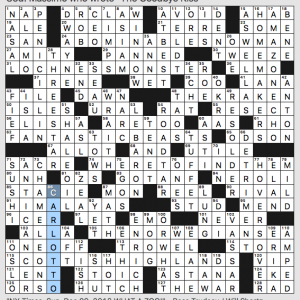 In the middle of the puzzle we have three more theme answers: 62a [With 68- and 74-Across, J. K. Rowling’s first screenplay, with a hint to three pairs of answers in this puzzle]. All together those three entries give us FANTASTIC BEASTS/AND/WHERE TO FIND THEM.

A nice, solid, satisfying theme. THE KRAKEN is new to me. I’ve heard of Champ, the cryptid reported to live in Lake Champlain. Are there others?

What I didn’t know before I did this puzzle: see above re: THE KRAKEN. I had also never heard of CARLOTTO Massimo or “The Goodbye Kiss.” 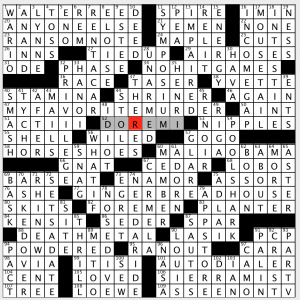 After the super-high word count in last week’s Mini-Madness puzzle, this week is at the opposite end of the spectrum: the 9th in Evan’s 21×21 themeless series. Naturally, the word count will be lower. In this case 128 words.

Seed Entries (or at least I assume): 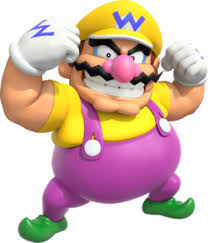 Fun puzzle, though it’s not a sparkly as Evan’s themelesses tend to be. 4 Stars.

As we did two weeks ago, we solve for a longish quip. Which I like, though I know many solvers who do not.  With the timer going, I finished in 19:15, with at least two minutes wasted correcting typos along the way. Read that: This is one easy romp.
At 27-, 44-, 58-, 67-, 84-, and 96-Across, the authors share with us [… a quote by Boris Karloff]: WHEN I WAS NINE I PLAYED / THE DEMON KING / IN CINDERELLA AND / IT LAUNCHED ME ON A / LONG AND HAPPY / LIFE OF BEING A MONSTER. Other noteworthy stuff includes:

2 stars. Even though I like quip puzzles in general, I found this one to be very non-exciting.

We have food and cooking terms defined – differently. Some work better than others. 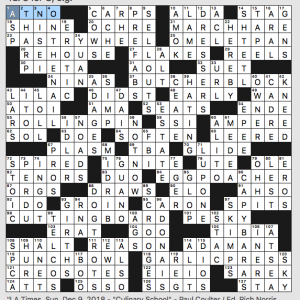 As I look at the list, I realize there’s only one that doesn’t work well. It’s the first one, though, so it colored my experience of the theme.

What I didn’t know before I did this puzzle: see above re: DOG TROT.