I really like the puzzle. It’s accessible enough for a Monday and the theme is interesting and multi-layered. That’s not easy to do.

We have four theme entries and a revealer. 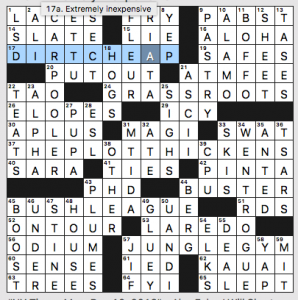 And the revealer: 37a [“Now things are getting interesting” … or a hint to the first words of 17-, 24-, 45-, and 57-Across]: THE PLOT THICKENS. We go from DIRT to GRASS to BUSH to JUNGLE on the same PLOT of land. This gave me a satisfying “aha” moment on a Monday puzzle. Very nice. The fill is quite clean for a puzzle with this much theme material.

What I didn’t know before I did this puzzle: that MT IDA was a sacred peak. I knew it was a Greek peak, but that was all.

ZB is back and she brings us a super-smooth Monday grid.

I didn’t know what was going on until I hit the revealer at 60a [All the time, as well as a hint to the abbreviations hidden in the starred answers]: AM/PM. Each answer has that letter string hidden inside. 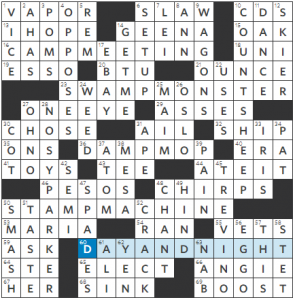 A nice themeset. I especially like the SWAMP MONSTER. STAMP MACHINE feels the most iffy; I’m not sure I’ve seen one in many a year, but they must still have them (mustn’t they?). I generally prefer that there be a reason behind the puzzle—in this case, a reason why AMPM is hiding out inside our theme answers. But on a Monday, I’m a little more lenient on that front. And the given revealer is well-chosen.

The long fill is nice, as per ZB’s usual: COUNT SHEEP and NOSY PARKER make for great pillars in the grid. And the sound effects almost had me feeling like I was reading a Batman comic: SMASH! CRACK! CHIRPS!

This is what you want in a Monday grid: a gettable theme, colorful long fill entries, clean supporting fill, and straightforward (but not boring) clues. This is why it’s so tough to make good Monday puzzles, and yet Zhouqin makes it look so easy. 3.75 stars. 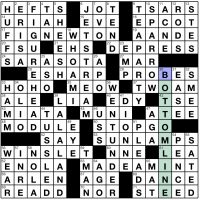 I really liked this theme and it certainly did not DEPRESS me or give me the EHS! The last word of each themer can be paired with LINE to form a compound word or phrase: headline, streamline, party line, underline, land line. Not only are all the theme entries themselves very common and in-the-language, so are the -line words or phrases. And, the grid is mostly clean for such a theme-dense puzzle (though AANDE ERISA LIA ASO felt a bit dodgy). This might be one of my favorite LAT Monday puzzles in a while!

We have some nice female representation in the grid today with EVE, Kate WINSLET, STES, Mia HAMM, and DIONNE Warwick. Did you know that Warwick is “second only to Aretha Franklin as the most-charted female vocalist of all time, with 56 of her singles making the Billboard Hot 100 between 1962 and 1998, and 80 singles making all Billboard charts combined”? Wow!

My only major ding of this puzzle: [Beachgoer’s color] is only TAN for some people. Clues like this assume the subject and solver to be white, which only marginalizes people of color who might be solving. 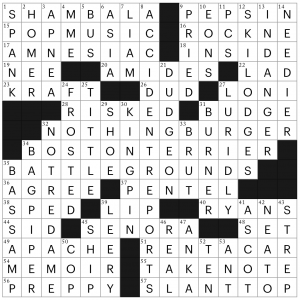 I know my POP MUSIC pretty well, but Three Dog Night’s “SHAMBALA” isn’t on my radar (and won’t get written up in Stereogum’s ongoing Number Ones series, since it only peaked at #3 on the charts).  What was on my radar, though, is that the BOSTON TERRIER is nicknamed “The American Gentleman”.  If my apartment building allowed pets, I’d already have one napping on my sofa.

There was a lot else to love in the grid on this one.  Bolstering either side of BOSTON TERRIER were NOTHINGBURGER (a phrase I have only seen in crosswords and never heard spoken aloud) and BATTLEGROUNDS, and ACCIDENT REPORTS (clued as “Pile resulting from a pileup”) did a great job of anchoring the down fill.  I had somehow misremembered RENNET as the enzyme in cheese, not PEPSIN, and my brain couldn’t remember that J. Press is PREPPY without a little help from some of the crossings.

“Like nineties hairstyling tips?” for FROSTED made me titter while solving. Unlike last week’s toughie, this puzzle was more in my bandwidth, as I finished it in 22:15 by the AcrossLite timer. I found it fair and otherwise reasonable on all fronts, though with a distinctly difficult feel throughout. It made me feel good about me! Highlights, and musings thereon:

Other good ILSAs include PIGPENS, SEEDPOD, BEDROLL, and FOG ALARM, all adeptly clued.

4 stars. Quite entertaining! Another great effort by BEQ!