Title: “Piano Pieces”
Prompt: The meta for this puzzle is a famous jazz piece.
Answer: “Take Five” by Dave Brubeck 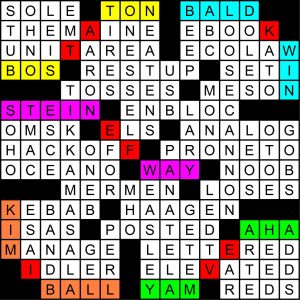 I don’t know much jazz, so I began by Googling a list of greatest jazz pieces of all time. The #1 piece was “Take Five,” which seemed suggestive for meta use. So did a couple of others like “Take the A Train,” though, so went ahead with the solve armed with a few possible answers.

The fill and black square pattern strongly suggested some kind of meta-pattern appearing in the grid as opposed to something theme entry-related. The longest entries are a pair of 11s, followed by a bunch of 8s, so there’s probably not a set of four theme entries hiding in that woodpile. Plus the fill is rough enough in places to suggest there was a lot of stress on it (EFOR in particular I was sure had to be there for a reason, which turned out to be true).

Starting with the usual: 1) free-scan for a minute or two, see if anything jumps out; 2) go over the clues one by one, looking for any subtle hint I might have missed, or something unsubtle like an asterisk, 3) more organized version of 1), looking at letter frequencies, scanning diagonals, etc.

That search yielded…not much. For about 15 minutes I tested the hypothesis that the title “Piano Pieces” meant I should circle all the instances of P, I, A, N, and O in the grid, which I did, first connecting all the Ps, then all the Is, and so on. The first few letters were each just promising enough to make me go on to the next letter, but after the N’s my “treasure map” looked ridiculous so I realized it was time to move on.

Then I decided to look where the fill was most strained. When I started thinking along those lines my eyes were drawn to the upper-right and lower-left: why did he need those three black squares in each of those corners? Scanning those, I noticed the name “Kimball” comprised of the entries KIM and BALL. Its mirror image in the NE read BALD/WIN, so this was unlikely to be a false trail.

Googling those two names together I discovered they are famous brands of piano, which sounded familiar once I read it. I’ve probably seen a lot of Kimball and Baldwin pianos, but the famous company I knew offhand was Steinway — and there it is, STEIN/WAY at 25- and 40-Across.

99%+ chance this is the right path now. Don’t know any other famous piano companies but Google does, Google knows everything, and it tells me about the Yamaha and then Boston companies, which are in the grid symmetrically as YAM/AHA and BOS/TON.

Now I got stuck. These five pianos seemed to suggest “Take Five,” but beyond the “fives” what else is there? The piece features one piano, not five, and what would “take” have to do with anything? With time running out I crossed my fingers and submitted “Take 5,” about 70% sure it was correct.

It was, and the puzzle’s author told me what I’d missed: if you take the letters connecting the two pieces of each piano, they spell out, in grid order, contest answer TA/K/EF/I/VE, in red in the solution grid at right.

That’s an outstanding meta, and this is now may favorite installment of the series this year, displacing November’s masterpiece. The piano pieces stick out just enough for the solver to find them after a search, and the solver is sure they’re on the right path after the pianos appear. But then what? The last step of connecting the piano pieces is so logical and simple, but elusive as well, and then painfully obvious in retrospect. That’s how it’s done! He really ended 2018 with a couple of towering home runs. 4.87 stars — this is a beautiful and unique idea whose potential Pete maximized. I bet this one took quite a while to orchestrate.

I always get the December-January schedule mixed up so Pete or someone who knows please remind everyone in comments when the next few puzzles go out. And I’ll see you back here then. And…I hope we’re getting another season of MMMM? Come on…