This week we get a downs-only challenger from Mr. G! If you haven’t gotten on the downs-only bandwagon, it’s another way to turn up the solving difficulty, and it can help hone your pattern recognition in competitive arenas. Fiendsters Erik, joon, and Andy have all publicly solved downs-only on the streaming platform Twitch; you can usually find joon and Andy collaboratively solving the Newsday “Saturday Stumper” downs-only many Sunday evenings around 9pm on joon’s Twitch channel. It’s fascinating to watch and listen to two tournament champions give themselves even more challenges on one of the most challenging puzzles around. 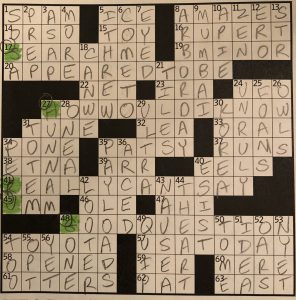 In this week’s puzzle, solving downs-only was comparatively gentle; the only entry that gave me much trouble was [27d: “Sons of Anarchy” star Charlie]: HUNNAM because I was getting him mixed up with fellow hunky British dude Sam Heughan of Outlander. I also decided to print out and solve on paper, since the WSJ webapp seemed even more irritating with only one set of clues.

Well, partially only one set; I noticed after completing the grid that a few of the across entries had a certain … je ne sais quoi. Namely, they could reasonably be clued with [No clue]. These were:

ut those in order, and the first letters spell SHRUG — a “fitting five-letter word” that can also mean “No clue.”

I can’t help but think there’s a little bit of an inside joke for constructors here. There are two standard platforms for constructing crosswords: CrossFire for Mac, which is what I use, and Crossword Compiler for PC. The software is incompatible, so that a file created on one platform can’t be opened on the other. If you construct collaboratively, which many of us do, it’s great if your partner-in-grid is on the same system as you — then you can just pass the file back and forth. But if not — and two of my most recent collaborators have been Compiler users — you have to export the grid to .puz and send it that way. If you want to export a completed, unclued CrossFire grid from .cfp to .puz to email to your constructing partner (so that, say, they can take a pass on editing the fill), CrossFire doesn’t like generating .puz files without clues, so it fills in dummy clues, like the figure to the left. This is why a couple of people in my solving group thought something might be wrong with the file. Was Matt intentionally referring to this phenomenon? ¯\_(ツ)_/¯.