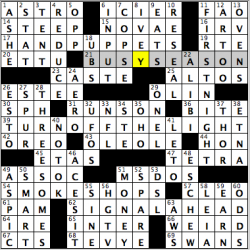 Good morning, everyone! I hope all is well and, for those in North Carolina at the moment, hope you all are staying safe through the powerful snowstorm that has passed through those areas affected. In today’s grid, the first four theme entries are all multiple-word answers in which the first word can also come before the word “signal.” The fifth theme entry, SIGNAL AHEAD, acts as the reveal (62A: [Traffic warning…and a hint to the puzzle theme]).

Had a lot of fun solving, and the paralleling entries of FIRST NIGHT (11D: [December 31 celebration]) and THREESOMES being wonderful fill (28D: [Groups like Lady Antebellum and Dixie Chicks, for example]). I initially put in “class” instead of CASTE (23A: [Social division]), which, for a while, threw me off because I ended up wondering if “Lero,” as opposed to the actual answer, AERO, was actually the name of a car (24D: [Saab model]). Though OPP does not show up in grids too many times, a constructor definitely needs to clue this as “You Down With ___, Yeah, You Know Me!,” one of the most memorable hip hop lyrics/songs of the last 25-30 years from the group Naughty by Nature (5D: [Antonym (Abbr.)]). If, somehow, you have no idea what I’m talking about, just take a listen and thank me later!

“Sports will make you smarter” moment of the day: THOR (37D: [Thunder god]) –  I’m pretty sure you’ve seen THOR clued in 6,257 different ways, so let’s throw in another reference to the Norse god, but do so with a sports tinge. One of the top pitchers currently in the game of baseball is New York Mets starting pitcher Noah Syndergaard, who is nicknamed “Thor” in part because of his long blonde locks,  his last name resembling the mythical Scandinavian land of Asgard and his overpowering fastball — sometimes recorded over 100 miles per hour — that some equate to the impact of Thor’s hammer. Syndergaard made his debut in May of 2015 and was selected to the 2016 MLB All-Star Game. He also was the opening day starter for the Metropolitans in 2017 and 2018. 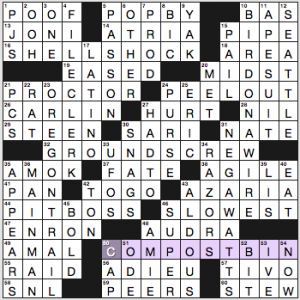 This husband-and-wife constructing pair’s byline is popping up more and more, and that’s a good thing. This Tuesday puzzle has a fresh theme whose little surprise in the revealer walloped me because I had no idea what the theme was till I reached 50a. [Place for kitchen scraps, such as those starting 16-, 24-, 32- and 44-Across], COMPOST BIN. Oh! Yes, the first words of those four entries are all, in other contexts, food scraps you don’t eat.

One thing that slowed my recognition of the theme was seeing the longest Downs, BIRD ON A WIRE and OREGON TRAIL, as possibly/probably thematic, since two of the themers were short 7s. But it’s not generally considered a crossword foul to have Downs that are longer than some Across themers, and it’s never a bad idea to eyeball the Across clues near the bottom to look for a theme revealer.

Slowed myself down a tad by making 4d. [Low-level law firm employee] a FIRST-YEAR associate instead of a FILE CLERK. Oops. I also have never encountered NEGAWATTS, or 31d. [Units of power saved, in modern lingo]. Who is using that? Is this a “kids these days!!” sort of word?

4.25 stars from me. Smooth fill, crisp theme. NEGAWATTS may end up in the debit column if it turns out none of us know this slang term. 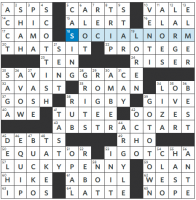 I liked how this puzzle looked at these phrases from a new angle, though some of the clue/themer connections seemed stronger than others. My favorite themer was easily SOCIAL NORM, though LUCKY PENNY didn’t do much for me. I did appreciate the gender parity in the themers, and there were a number of women represented in the grid/clues: Annie Lennox, Sheena Easton, Sophia LOREN, LIZA Minnelli, REBA McEntire, CLEO Laine, Minerva, Cathy RIGBY, and OLAN. Wow! That might be more women than men in this puzzle (or at least parity), which I’ll take any day. And a (presumably) female constructor! <3

The fill in this puzzle is largely clean, which I also appreciated. I certainly learned about PIMA cotton (aka Sea Island Cotton and known for its high quality) from this grid, and I had no clue that the EQUATOR passes through 15(!) countries. I’m not sure if I would have predicted that number to be higher or lower, but I wouldn’t have guessed in that ballpark, I don’t think.

Side note: Does GO TO TOWN really mean [Act with energy]? I have only ever heard that phrase in a more … intimate connotation. When I filled that in, I had a ?!?! moment of, “How did they get that past the editors?!” 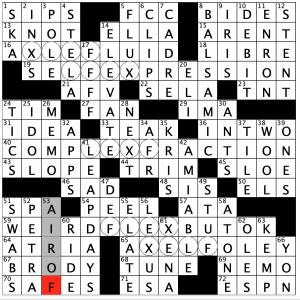 The title is a play on the theme, which is revealed at 59A:

I will let the reader Google this, as I just did. Basically, this means bragging about something that makes you look bad or says too much. Each of these themers, in the circles, has a “weird FLEX” in a literal sense, and they are all different. I had never heard of this phrase until solving this puzzle, so it is now abundantly clear that Matt is more hip than I am! I’m not sure what the upper limit is for word count in a 15, but this is at 78, which is close, I think. That is not a negative comment, just an observation. I don’t remember seeing an 80, but I will pay attention in the future to see if a puzzle hits this number. Now I am rambling. 4.5 stars today. 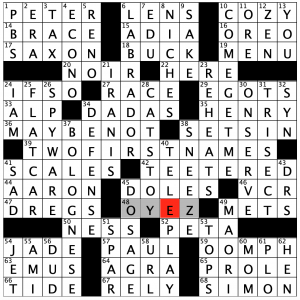 It has come to my attention that the constructors of this puzzle are a father and son team. And the son is 10 years old! This is really making me re-think why I haven’t made a puzzle in decades. Perhaps I will make another puzzle when my son turns 10 in 4 years!

Seriously, I think this is phenomenal, and the theme is done exceptionally well. It starts off a little vague, unless you’re a huge REM fan. There are seven thematic entries, including the main revealer at 39A. There are six names in the grid: PETER, BUCK, HENRY, AARON, PAUL and SIMON. The clues where each of these names are clue a famous person whose last name is the next name on the list, and it wraps around at the end! Here are the names (I won’t re-type all the clues for brevity’s sake) and the 39A entry:

Extremely well done. And I am not just saying that because I TOO have two first names!! The entries are all symmetrically placed, the theme flows nicely and the wraparound ties a nice neat bow at the end. Stick a Q in this grid and it would have been a pangram! If this is in fact a debut puzzle by at least one of these Krebs, I salute you both. A robust 4.8 stars for this one, along with a plea to make many more!

A few more things, mostly with a slant from a 10-year old mind:

I am off to work on the puzzle I have been tinkering with for a while! Have a great day!