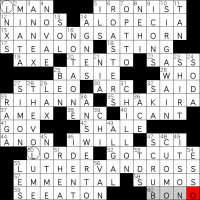 hello and welcome to episode #549 of matt gaffney’s weekly crossword contest, “I’ve Got Your Number”. for this week 1 puzzle, i attempted to solve this without the instructions, and that did not really work out, although the theme was readily apparent. two long full names are in the grid: 15a {Constructor who wrote the extremely intricate puzzle “Shell Game” here last week} XAN VONGSATHORN (how’s that for meta?) and 55a {Four-time winner of the Grammy for Best Male R&B Vocal Performance} LUTHER VANDROSS. in addition, there are six famous mononymous people occupying symmetrical spots in the acrosses:

okay, so what’s the theme? well, the fact that XAN VONGSATHORN (XV) is located at 15-across and LUTHER VANDROSS (LV) is at 55-across can’t be a coincidence, especially given the title. so it looks like 1a IMAN and 50a LORDE also fit the theme, but the others do not. having noticed all that, i still didn’t know what to do as far as extracting the actual meta answer, so eventually i gave up and peeked at the instructions: Two of this puzzle’s four theme entries are found at 15-A and 55-A. Which two one-named celebrities in the grid are also theme entries?

oh. well, okay. it’s IMAN and LORDE. i guess i was already done.

this is a fun theme. it’s an amusing idea to use xan’s unusual name as the seed for a metapuzzle, and even though roman numeral metas have been done before, this one tickled me. i think it would have been more intricate and more elegant if there had been an actual extraction mechanism rather than just hiding two extra theme answers among a set of red herrings, but that probably wouldn’t have been week 1-easy, and it’s much better to have this one right after last week’s so that xan’s name might still be fresh in solvers’ minds.

i wonder if matt toyed around at all with the possibility of putting somebody like LOUIS XIV at 40-across. or would it have been too clunky to use his roman numeral to just represent the X in LX?

anyway, that’s all i’ve got this week. how’d you like this one?