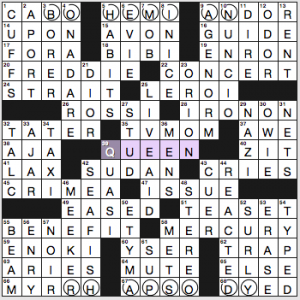 The theme feels tardy, since the BOHEMIAN / RHAPSODY movie came out on November 2 in the U.S., and if you’re gonna have a Queen theme in fall 2018, shouldn’t it be tied in to that? Anyway, BOHEMIAN and RHAPSODY appear in circled letters in the top and bottom rows, for no discernible reason. 20a/58a is FREDDIE / MERCURY (and I see it’s NYT style to use “frontman,” while at my job we follow Merriam-Webster’s “front man,” even though I prefer “frontman”). His band QUEEN (39a) apparently gave an iconic performance at 25d LIVE AID, which wasn’t in my memory so I looked it up. See below for a 24-minute video of it. Uselessly, the theme answers also include 22a. [25-Down, notably], CONCERT], and 55a. [25-Down, notably], BENEFIT. Why wouldn’t you just find a regular place in the grid for BOHEMIAN and RHAPSODY in the grid, and chuck CONCERT and BENEFIT? I suspect David was keen on the pretty symmetry of the 7/7 pairs connected by the LIVE AID vertical, which in turn is crossed by QUEEN in the middle. But I think most solvers are noticing the fill and clues more than the placement of the themers, no?

Anyway, Freddie Mercury was a legend, and I haven’t seen Bohemian Rhapsody yet but I look forward to it. I feel like “We Are the Champions” and “Crazy Little Thing Called Love” (the latter is at about the 12:30 point in the video) were maybe the most memorable rock songs of my junior high years.

Wasn’t digging much of the fill, alas. APORT crossing FORA in the opening corner. The implausible SEA FISH (perhaps this is a more common term outside the U.S.?). EVIE ENRY CUER ETYMA. And the acutely unpleasant NAZI, which I was able to find a work-around for in less than 5 minutes and I’m not a gridding whiz. IRONIC IRE CAL CRESS crossing NICE IRAS CELS isn’t great, but NAZI and OWIE aren’t so hot, either. These things make me SURLY.

Five stars for Queen, 3.2 stars for the theme and fill.

Our theme today changes “ur” sounds to “or” sounds. The title ostensibly gives us reason to do so. 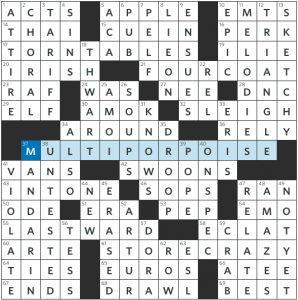 I liked this fine, and I liked a couple of them more than fine, but it feels pretty wide open. It seems like there are a lot of other possibilities that might result in more interesting entries. I spent just a couple minutes looking and came up with THUNDERING HOARD and BORED OF PARADISE which are both grid-spanners and have potential for humorous clues (although the latter might not due to the wildfires in California).

I love those big corners in the grid with 6s, 7s, and 8s. They’re impressively filled, too, with MELODIES, SKETCHY, MANDARIN, UNTESTED, timely TARIFF, and more. Other goodies include THWART, SLEIGH, and the SWOONS/DROOP crossing.

I’m not so keen on ECLAT [Showy style], SOPS as a plural noun [Placatory offerings], and CUE IN [Bring up to date] (which seemed like it should be CLUE IN) crossing the weird PELF [Loot] (which seemed like it should be PILF, as in short for “pilfer,” even though that’s not a word but a lewd acronym on Urban Dictionary — if you have delicate sensibilities, especially when it comes to baked goods, don’t look).

I had a couple of miscues in that NE corner which made unraveling it a bit tricky.

A fine puzzle, though the theme felt a little loose. 3.5 stars. 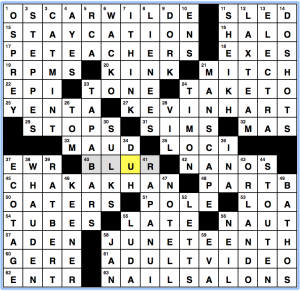 It’s a themeless week at the AV Club, and Kameron was NOT playing around in his clues this week: 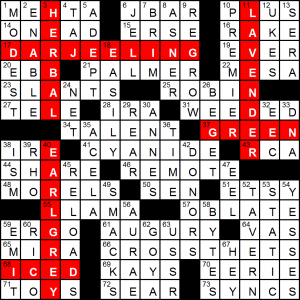 Apologies for the extremely late blogging.

I noticed early on during solving that it was odd DARJEELING‘s clue didn’t mention TEA, since that is its “only” claim to fame. Turns out there’s a good reason. The revealer is CROSSTHETS and we have three pairs of TEAS, though not clued explicitly, and sometimes jumping over hoops in order to do so. The TEAS very in specificity, but can all be completed by ___ TEA.

[Hook-shaped ski lift], JBAR / JELL seems gratuitous, but if you tell me JBAR lifts are more common than TBARS, I will be mollified.