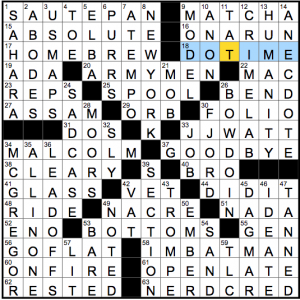 Anyway, the giant X formed by black squares in the center of the grid isn’t just aesthetic — it’s also thematic. Four entries begin or end with the central black square in that X, and the X is a stand-in for some missing word. Like so:

I have to admit that I liked this theme more the last time I saw it, but nevertheless the execution here is really excellent. There’s something very elegant about the four theme phrases extending directly into the X. It’s very unusual to have unchecked squares (that is, squares that appear only in a single entry rather than in both an across and a down entry) in a NYT crossword, but the four unchecked letters in this grid are very inferable. I think I would have rather had the final X stand for “ten” or “strike” rather than “cross,” but other than that I think the theme was spot-on.

And hey, the grid is pretty exceptional too! This is a 72-word grid, which would be a normal Friday word count. The four corners are wide open, and there’s some cool stuff in them: HOME BREW, “I’M BATMAN,” J.J. WATT, NERD CRED, CRIME LAB, U.S. MAPS. A lot of multiword phrases like DO TIME and GO FLAT and ON A RUN and ON FIRE. The rest of the fill is clean as a whistle, which is mighty impressive.

A lovely Thursday puzzle. Until next time!

This is a signature Mike Shenk-type theme that I’ve only ever seen from him. In this edition, four phrases whose first few letters (or last few letters) spell out a slang word for “jail” have those letters separated from the main part of the phrase by a block. The clue [Jail, informally] accompanies the slang word, while the main portion of the phrase gets the clue for the entire phrase. 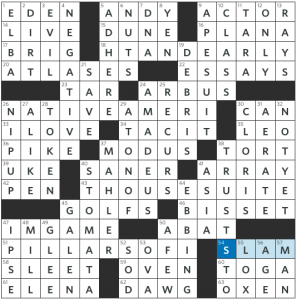 I’ve done quite a few of this type of puzzle, so I recognized this one early on. Consequently, I didn’t get a lot of joy from it. I’m sure it’s fine for most solvers, but there’s no wordplay here, and at the end of the week, I’m always hoping for something different and clever. This doesn’t do it for me, especially when there’s a suspect entry like SLAM.

I do like that central vertical run from APE SUIT and DEBRIS, through AMADEUS, and down to MAHLER and STOMATA. Cool stuff! The other long Downs, NEGATIVE and TRUSTS TO, aren’t as interesting, but they’re constrained from having to cross two theme entries.

I’m not so keen in IPSE [___ dixit]. But I do like the board game Dixit, so that softened the blow. NIP-UP [Acrobatic spring] was another tough one to suss out, and I had to triple-check all of the crossings before going with that answer. I had no idea that move had such a name (maybe if my kids stuck with gymnastics I would) but I’m glad to learn that it’s not whatever the heck this thing is.

I’m not thrilled with the theme, but it’s a solid puzzle. 3.4 stars. 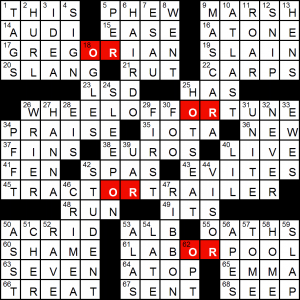 I managed to grok this theme on the first entry, which is unusual for me. Phrases (and one word) with an OR in are reparsed to be A OR B and clued wackily. The results tended to the inane side of the wacky spectrum for me, though it was always going to be a tough land. I did enjoy the craziness of how WHEEL/OF/FORTUNE became WHEELOFF/OR/TUNE. I feel like that has to be the seed entry.

An oddly uneventful grid. Not too much in the highlights or lowlights column. A few chestnuts like EIS, ALB, and UAR but not too many. [It may run during a sad movie] for MASCARA is about as adventuresome as the clues got today… 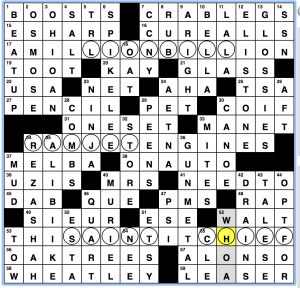