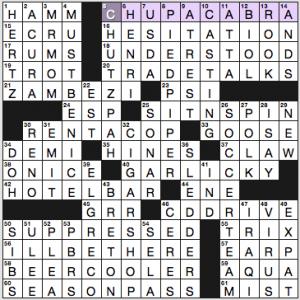 I was trying out a new pair of “workspace” glasses (top half for arms-length screen, bottom half for closer reading), so I turned off the puzzle timer. (Verdict: These glasses are not ready for prime time when it comes to my iMac screen. Or my eyes aren’t.) With my old glasses in place, the solve went much better! Crosswords are easier when you can see the clues. And the grid. Gotta see that, too.

This 68-worder is smooth and it’s zippy. Top fill: CHUPACABRA, TRADE TALKS, SIT ‘N SPIN, GARLICKY, HOTEL BAR, “I’LL BE THERE,” BEER COOLER, “MUST BE NICE …”, EL GRECO, CHUTZPAH, and PIED PIPER (just a few more months till the next season of Silicon Valley, I hope!). We’ve got the Scrabbly ZAMBEZI River, and a Scrabbly corner that includes a Q and and X without any junk fill.

Overall, a fun puzzle filled with lots of goodies. 4.25 stars from me.

The revealer is at 114a [Reduce a staff, and make seven squares in this puzzle smaller, in a way]: DOWNSIZE. Theme answers have certain letters changed — either Ls become Ms (Large to Medium), or Ms become Ss (Medium to Small). 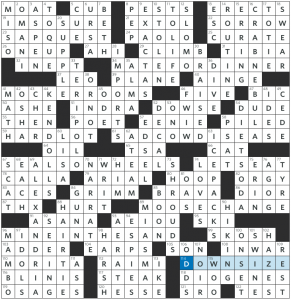 This feels too wide open. I’m not detecting any pattern to the letter changes other than the size aspect and the fact that the letters are the first of each theme answer. There are so many possibilities for theme answers: LOVE > MOVE, MIX > SIX, LUST > MUST, LITIGATION > MITIGATION, MONOGRAM > SONOGRAM, MALINGER > SALINGER, and on and on. Another constraint should be added to tighten it up.

For a bit I thought there was an animal aspect to this, what with the moose, cow, and seals. Really, given the corporate nature of the revealer, the ideal set would be major American corporation names that have been altered, but I’m doubtful that it’s really possible. A quick look turned up HOSE DEPOT, but not much else.

It’s also slightly inelegant to have other size letters that don’t change within an answer. See SEALS ON WHEELS where the Ls don’t change. I realize the revealer indicates only seven squares are changed in the whole grid, but this feels a little bit like a cheat. At least having all the entries start with the changed letter is consistent. 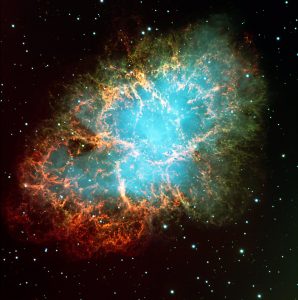 Overall though, this was a speedy solve, and I felt like I was on the go constantly without getting stuck for too long in any one place. I loooove CRAB NEBULA as fill. “I’M SO SURE,” “LET’S EAT,” KEN DOLLS and ICE PACKS are fun, and MIASMAS is just a cool word. ALEXANDRIA is great as well, but why not clue it with respect to politician Ocasio-Cortez for some ultra-timeliness? A missed opportunity.

The only spot that really slowed me down in the grid was the section surrounding [“Meet the Parents” co-star] TERI POLO and [Hindu god of thunder and lightning] INDRA. (PLANE clued as [Shaving tool] added to the trickiness, since it looked a lot like BLADE for a while.) I don’t recall that actress’s name, but once I worked out everything else, I made the educated guess to go with the I and got it right. Another name I didn’t know, comedian TOTIE Fields, had fairer crossings.

A solidly-made fast-solving puzzle with strong fill throughout. However, I feel the theme needed some tightening up. 3.4 stars. 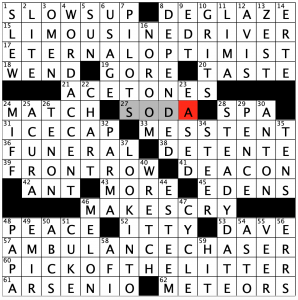 I think I am getting better at Greg Johnson puzzles. This one fell quickly in under 6 minutes, despite the stacked 15s at the top and bottom. I found this fun and not too hard, despite struggling with some of Greg’s Saturday LAT offerings in the past. Bring on another one; I think I am learning your style, Greg! A solid 4.3 stars today.

Next LAT puzzle blog for me comes on Tuesday. 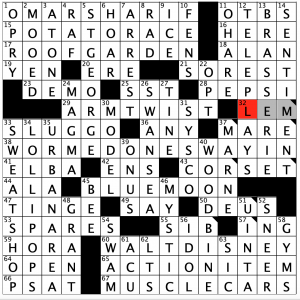 I started smoothly, ran in to a bit of a wall, but overall I am happy with a sub-15 minute solve time on a Brad Wilber Stumper. There is lots of good in this 72-worder, which is no surprise in a Wilber puzzle. Yes, I have a few error boxes in the grid image; I think I was just tired at that point! All is fair in here, and I found this a fun solve. That means, as I seem to say a lot, that next week should be brutal. 4.4 stars today.