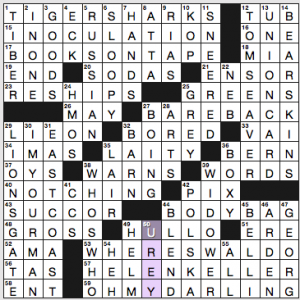 This is a 72-worder, so I’m not sure why I’m encountering so many entries I don’t care for. 72 should be pretty smooth! I do like TIGER SHARKS, WHERE’S WALDO crossing WHO’S WHO, HELEN KELLER, LIONSGATE, POLSKA, and UNION CARD. BODY BAG and BEARSKINS are downers, though. And ENSOR RESHIPS IMAS OYS ECK ATTA KOP NEB, blah. I really hate NEB clued as if people are abbreviating Nebraska that way. (It is scarcely any better as the crosswordese bird beak.) (See also: N. CAR., N. DAK., S. DAK. No, no, no.)

Note: The Chronicle puzzle, like many educational institutions, will go on winter break for two weeks, and will return the week of January 7. 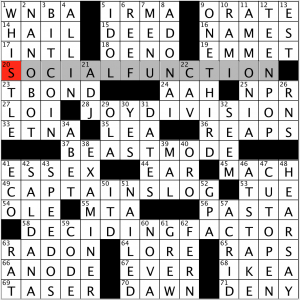 These are all fun, and it’s great to see the dream team of Chung/Ni collaborate with another constructor, Tom Tabanao, who is someone I’ve met at tournaments but not a byline I’ve seen. So congrats to Tom, if this is your debut! And, I think, Amanda and Karl’s CHE debut as well.

And we have the CHE’s lovely range of subject matter to plumb for clues — from sports to physics to TEEN POP and the history of the American whaling industry. I like! Since the forecast for northern New England today is lots and lots of freezing rain, I’ll leave you with the eternal question: [67. “Have You ___ Seen the Rain?” (double-platinum single for Creedence Clearwater Revival)]. 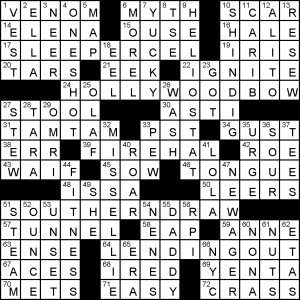 Today’s puzzle them relies on a very deft theme revealer – LENDINGOUT is parsed as “L ENDING” OUT. In four other answers, their terminal L’s are dropped creating wacky answers: SLEEPERCEL(L), HOLLYWOODBOW(L) and SOUTHERNDRAW(L) do the business. I’m less sold on FIREHAL(L), mostly because I can’t define the base phrase. It seems to be a Canadian word for a fire station?

[Foul], YUCKY. My younger pup, Solo, is under the table farting away and it is indeed… TARA the older one, is already abed.