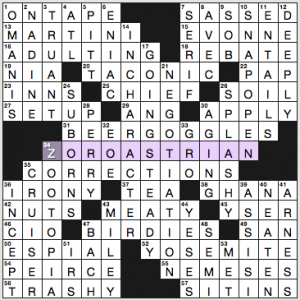 We always like it when one of Team Fiend’s lovely people has a crossword we’re blogging. Did you know that Joon also offers two puzzle subscription services? It’s true! Outside the Box Puzzles has a weekly Rows Garden puzzle, $20 a year, and the puzzles frequently have a couple topical long answers. There’s also the Variety puzzle line-up, 25 puzzles a year, authored by Joon and a talented roster of contributors. (There is even a puzzle type called Touchwords invented by contributing constructor Grant Fikes that is kinda cool, and that I’ve never seen elsewhere.)

Now I’ve used up half my blogging time not even talking about the Saturday puzzle. Highlights! We got ’em: MARTINI, ADULTING, BEER GOGGLES, ZOROASTRIAN, YOSEMITE, ZOOTOPIA, Pee-Wee Herman IN CHARACTER, GOING STEADY (though it’s a quaint term not in much use these days … and come to think of it, it may have been dated 30+ years ago, too), and SPLASHY.

Did not know: 54a. [Pragmatist philosopher Charles Sanders ___], PEIRCE. There’s a Peirce K-8 school near me, but it’s not named after Chuck. (Tough crossings, with unusual INCEPT intersecting both oddly spelled PEIRCE and uncommon ESPIAL.)

DECK THE HALLS is the song of the day. If you haven’t already heard it enough by now over the airwaves, consider yourself earwormed — Christmas-style. (The revealer clue at 117a is [Song whose refrain has been prefixed to nine answers in this puzzle.]) In other words, one FA and multiple LAs are prepended to common phrases. 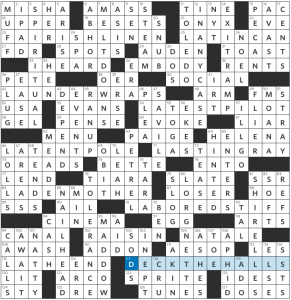 It’s pretty impressive to get nine theme answers plus the revealer to all work so well together. And everything is solid enough, though nothing was downright funny. My favorite part was realizing the play on words in the title where “Refrain” is meant to be synonymous with “chorus” and not “abstain.” (Plus, I can’t help but be reminded of my own musical Batman puzzle from a couple years ago.) 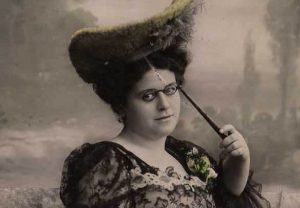 A woman using a LORGNETTE. Fancy!

A few bits of really uncommon fill gummed up the works:

There are goodies of course: SHIRELLES, SPIRITUAL, MELTDOWNS, IN ANY CASE, EXIT RAMP, NAIL HEAD, TOLERANCE.

That’s all from me. A solid Saturday to end the week. 3.5 stars. See you on Monday. 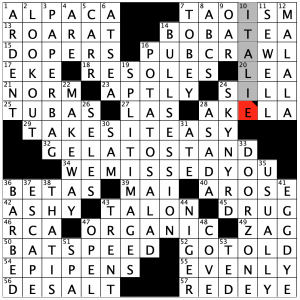 This is another stellar C.C. Burnikel construction. Although there is not an entry longer than 11 letters, all six of them are intertwined in the middle of the grid. I will of course highlight a few of these phrases below, but this puzzle makes it look like it was easy. Some phrases are a little less than common, but all are easily solvable regardless. I have raced through some LAT Saturday puzzles in less than 6 minutes before, but this is still a quick time for me. It was also fun. A solid 4.5 stars today.

Very nice! Enjoy your weekend, everyone! 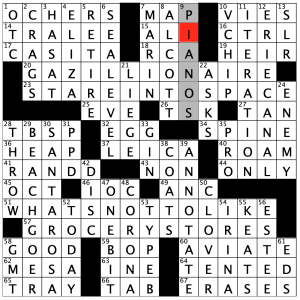 This one started off rough for me, then it seemed to fall easily. It turned into a true “Lester Ruff” puzzle: slightly easier than a normal Stumper, but still a tough puzzle. I finished where the cursor is in the image. Upon reflection, nothing in that area is really tough, other than 7D which I didn’t know immediately. 72 words in this one, which usually means a themeless with great fill, and this puzzle is no exception. A nice breather before what will surely be a killer Stumper next week. 4.4 stars.