***CLICK HERE to get the PDF of this week’s WaPo! Highly recommended over AcrossLite!***

If you solve in AcrossLite and need to see Mr. Happy Pencil in order to feel complete, you’re no doubt feeling some anxiety right now. Glad I completed this wonderful puzzle on paper. 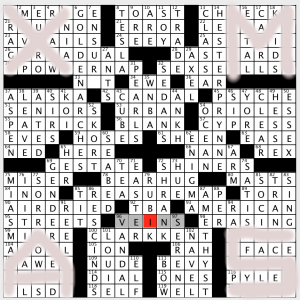 THEME ANSWERS: Hmmmm… tough to qualify what counts as a theme answer. So let’s go with the entries that help you to figure out the theme.

What’s going on here? Let’s see… A TREASURE MAP is closely associated with X. GOLDEN ARCHES = M. HESTER PRYNNE = A. And CLARK KENT = S. Clearly, this puzzle has something to do with X-MAS.

I was tipped off that this week’s WaPo was considered difficult, and I was wondering why 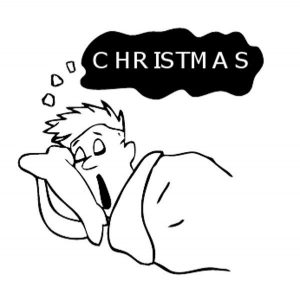 as I flew through the entire middle of the puzzle (making one big mistake, which I’ll get to in a bit). However, I was left with four very unsolved corners and the seemingly sporadically placed clue [White Christmas piece, literally].

Some gimmes in those corners just didn’t fit: [“You’ve got mail” co.] is AOL without a doubt. [Gomer on an old sitcom] is certainly PYLE. EURO, RAG, and NIA were all soft-balls (side note: NIA is more common a name than I thought last week. Ms. Vardalos is notably absent from this clue. My bad.). This is likely to frustrate a number of solvers, but knowing and trusting that Evan doesn’t construct anything haphazardly is probably the best hint to cracking those corners. That’s when I wrote X S A and M at the top of the paper and read the revealer-ish clue about some squares being BLA?K.

And I filled in BLACK instead of BLANK. 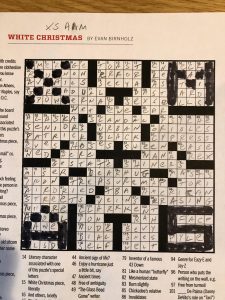 Ironically, my error helped me out as I tentatively blacked out an X in the NW corner. Bingo. Clues that read [White Christmas piece, literally] were blacked out entirely. And it was smooth sailing from there. Obviously, blacking out boxes completely contradicts the idea of WHITE CHRISTMAS, so that ate at me until I re-filled the grid in AcrossLite for a screenshot and checked my letters. Turns out, SEDACS are not a thing offered by Dollar. They do offer SEDANS though. Duh.

While the concept seems easy to pick up on in retrospect, this solve offered of the most satisfying AHA moments of the year- a perfect way to (almost) close out 2018. Chock-full of fun fill too.

Video games were snubbed this week.

5 stars from me. This was a great gift. Thanks, Evan! And Merry X-MAS to all who celebrate! 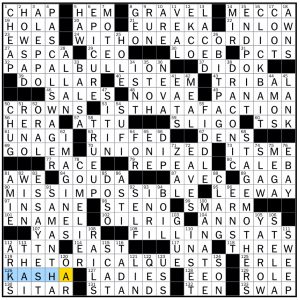 Derek here, subbing for Amy on the Sunday NYT. I was recently acquainted with Mr. Bywaters’ website (found here) several weeks ago. There was a thread I was reading somewhere listing which puzzles solvers tackled on a daily basis (I think it was the Fill Me In podcast, now that I think of it!), and Bywaters was on the list. I also remember this byline at a handout or two at the ACPT. I don’t believe I have ever met this person, and I don’t know if this is a pseudonym, but I don’t think so. This appears to be their second NYT published puzzle, and although there are only six themers (seven with the revealer), it all works together. The title hints strongly at what is going on; something involving the letters ION:

So you could say that the latter three theme entries had their IONs stolen by the first three, but I think the sense here is showing are some things are UN-ION and some are non-UN-ION, which is like a weird double negative! My time was a little long on this one, but I solved on an iPad, and I need to clip my fingernails. That’s my story, and I’m sticking to it! 4.5 stars for this one.

I will stop there. Thanks for letting me fill in on a Sunday!

This is not my favorite kind of theme. Each theme answer has a word hidden in the middle. No wordplay, just straight clues for straight answers. 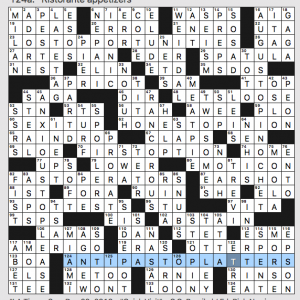 And we have a revealer at 103d: [Visit briefly … and a hint to the answers to starred clues], STOP IN. It’s solid theme (with the exception of 70a) and it works fine. It’s not all that interesting.

What I didn’t know before I did this puzzle: that bowling pins are made of MAPLE, that the movie “Scarface” is set in MIAMI, and that OTTER POPs are fruit-flavored. 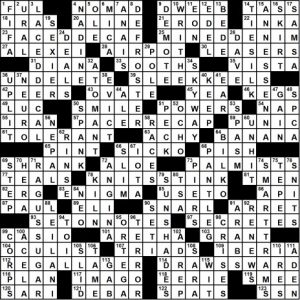 “Hello!” begins the email note with which this installment of the CRooked was delivered. “We regret to inform you that this puzzles-by-email service is winding down at year’s end. You can continue to find the puzzles in print in the Boston Globe Sunday Magazine. You should have already received a separate email with information about your subscription status and next steps. Please let us know if you have not received any such notice, and we’ll follow up. One more puzzle next week, after this one.”

Did I mention that this was captioned “Service Announcement”? I am passing it along as a–uh, service. It continues: “For questions or comments after the start of 2019, please write to crookedcrosswords@gmail.com.” Now, you know as much as I do.

I’m reviewing this crossword from the lobby of the Intercontinental Hotel in Atlanta, GA. Let’s see if the ambiance makes any difference. Because of the circumstances, I was unable to time myself accurately, solving this one in fits and starts, as I participated in family-related events. Let’s just say it was about 20 minutes.

The theme I got rather quickly, as FIFA and URAL let me know that DRANK DECAF’s defense to my claim of green-paint status was that it was a wrong answer. FACED DECAF put me on notice that I was looking for 12 pairs of 5-letter words, punnily clued so as to highlight that in each instance, each word was the other word spelled backwards. Does that make sense?  Plus, DRANK DECAF was not at all humorous, vis-a-vis the clue. Ergo:

Your reaction may differ, but I enjoyed the puzzle, even though the theme was rather ho-hum from a standpoint of its substance. There is a really nice architectural component, though, with pairs of themers crossing in every corner and another four in the middle of the grid. With 120 theme letters, though, there is a price to pay.

Non-theme stuff that grabbed me, positively and negatively, included:

I wish I’d not been distracted by other activities when solving. I’m giving it a 3.5 as being solidly above average.