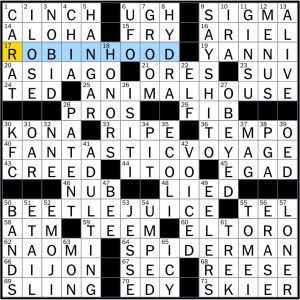 Someone with more car knowledge than me can ‘splain, but I’m pretty sure that the last VW New Beetle with a diesel engine was the 2015 TDI and that it’s not an option anymore. That doesn’t invalidate the (high quality) pun; in fact, given the NYT’s production schedule, it’s entirely possible that Howard constructed this puzzle while the TDI was still being manufactured. At the moment I’m vaguely paying attention to a movie with Tom Cruise (Mission Impossible: Fallout) that my family is watching and even without having had a few cocktails (Cocktail: also a movie starring Tom Cruise) I’d be hard pressed to explain the plot. There are some nice locations, though.

Didn’t we just have [41d: Doing grown-up tasks, in modern lingo]: ADULTING in joon’s Saturday puzzle? Way to much ADULTING for my vacation. And <snicker> I keep parsing [9d: Greets informally]: SAYS HI TO as SAY SHIT O! Shit! O! It’s late and I have to write a blog post! Did you get a [11a: Kind of knife in old infomercials]: GINSU this gift-giving holiday? I did not. Enough rambling from me. Hope all is swell for you, whether you’re going back to work tomorrow or you have another few days of loafing and eating.

It’s Boxing Day — that day in Britain and British-influenced countries when…what? They put on gloves and punch each other? Or they get rid of or collect all their empty Christmas boxes? Or maybe they just do crosswords?

My neighbour said it’s the day when they eat all their Christmas leftovers and make Bubble and Squeak. Other than that, I don’t know what this holiday’s about.

As for us, we have a puzzle whose main theme answers contain the word CRATE (48d, [Boxing container found in the four longest Across answers]). 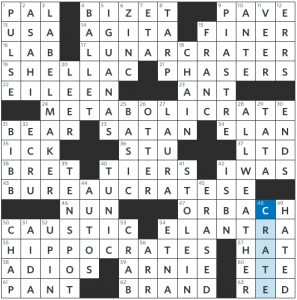 Only one of the entries spans multiple words which I find surprising. But that’s the only surprising thing. Mostly I found this theme rather unremarkable.

I liked ALL-WEATHER. LABEL MAKER, IGUANAS, STOLE IN, TEN-SPOT, PHASERS, and SHELLAC. Not so keen on PIASTRE [Hundredth of an Egyptian pound].

One funny moment was when I was trying to fill in 4a [“The Pearl Fishers” composer]. Given the letter pattern BI_ET, my initial reaction was to put a D in there. Thankfully I caught myself and went with the appropriate Z.

That’s all from me. I hope you have an enjoyable day putting letters in boxes on this Boxing Day! 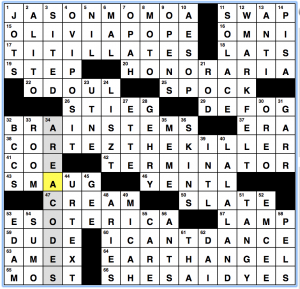 It’s Christopher Adams’ AVCX debut as a guest constructor. This week’s puzzle is a themeless, which is great as a reviewer who’s in the middle of the holidays and the travel that goes along with those. Let’s dig into the grid:

That’s not it in terms of fill, but it is a lot of the fill, so I’ll leave things there (plus, it’s Boxing Day, go do whatever we’re supposed to do on Boxing Day — box things?) 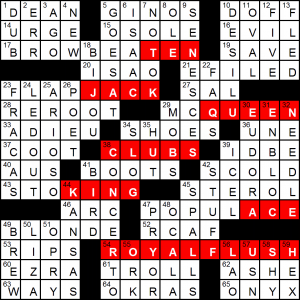 A ROYALFLUSH is TEN through ACE of the same suit, say CLUBS, which is why the puzzle has an awkward two part revealer. Unusually, all the theme parts are found in one-word answers.

While this is a seven part theme, I don’t think this fill should be publishable as is, particularly the IDBE/ICEL cross with STEROL and plural SPALLS all crammed into one corner. RCAF is spotted as the author is Canadian. Three six-letter answers intersecting two themers with a third themer also interfering is just too busy. It also leaves a pair of imbalanced 4×3 corners with no real pressure on them. We have LAO and USN in that area, but there’s no reason to use them.

The more balanced grid option would be to raise the three squares above USH to above ACE as well. It would push the word count to an illegal 80, but really sometimes that is better than the other options. It still doesn’t get rid of SPALLS (last seen in 1986 per my crossword record, I may or may not have been a foetus at that time, I don’t have the month in my database…), but it’s a start… This may well be a case where the only option should be – “redo from start”.