A sign of a good, tricky theme is that you’ll have at least one WTF-moment (maybe quite a few) before that satisfying AHA-moment. This one delivers in a big way.

This grid is jam-packed with theme material. Let’s get to it. 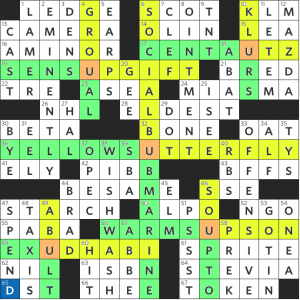 There is no section of this grid that is not impinged upon by the theme. And yet, for all that theme material, it doesn’t feel like there’s an exorbitant amount of clutter. And I’m amazed that there’s still room for non-theme fill of any significant length, let alone two 8s (OINTMENT, WISH-WASH) and two 9s (EMINENTLY, OFFENSIVE).  And I love the intersection of two beautiful grid-spanning theme answers YELLOW SUBMARINE and SOCIAL BUTTERFLY. But the wowiest factor of all is that while there certainly can’t be any extraneous U’s in the theme answers, there can’t be any other U’s in the grid, period.

In short, this is a highly-constrained but masterful grid, painstakingly built with careful attention to detail. And yet it solves so cleanly and easily that you might not notice.

To be sure, there is some gunky fill (though not a lot more than a standard grid). You have TYS, ONEA, ABBE, and A BAT. NGO (Non-Governmental Organization) doesn’t show up in crosswords as often as I would think it would, but it’s here. And three-S PSSST pushes the limits; I don’t think it would pass muster in a standard grid, but since there’s so much here, we can overlook it.

But again, I barely noticed these during the solve. And looking back on the grid post-solve, it’s the strength of the theme that stands out.

This was a proper Thursday puzzle. I’m going to crank it up to 4.5 stars.

We saw the word BESO recently (I forget where), but today we have BESAME [“Pucker up” command, in Spanish]. I’ll leave you with Andrea Bocelli and the classic BESAME Mucho. I’m straight, but if I wasn’t…damn! 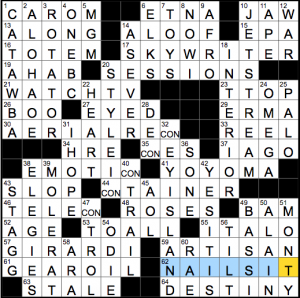 A quick write-up for you all today. The grid obviously has a lot of visual impact. In fact, it has an unusual type of symmetry called diagonal symmetry: if you drew the line x = y through the grid, the grid would be symmetrical on either side of the line.

Most striking is the somewhat plane-shaped cluster of black squares near the center of the grid. Those turn out to represent… well, a plane, as revealed in 40d, (CON)TRAIL [Follower of a plane … or a hint to this puzzle’s theme]. The plane has a trail of five CON rebus squares streaming behind it affecting ten answers: AERIAL RE(CON), (CON)EY ISLAND, DE(CON), (CON)ES, EMOTI(CON), the revealer (CON)TRAIL, STYLE I(CON), (CON)TAINER, TELE(CON), and (CON)TROL.

There are also a few bonus theme answers:

I think this is a cool theme! It does something unusual by mixing two common types of Thursday themes: rebus and grid art. I had a strangely hard time with this one. Maybe it’s because I solved this one later than usual, but I thought the clues were very tough. Also, the rebus element came as a big surprise given how localized it was in the bottom half of the grid.

There were a couple of hiccups in the fill (NOW I, TO ALL, SONE), but also some nice stuff to counterbalance it (ALOHA OE, YO YO MA, every theme answer).

Altogether, I thought this was good work (as always) from Jeff and Mary Lou. Until next year, and Happy New Year to all you Fienders out there! 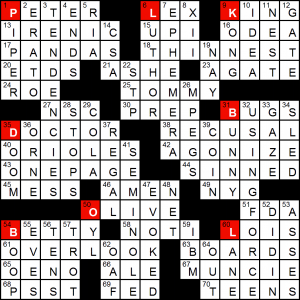 It’s a loose theme, but a lively and offbeat one. It made for an entertaining change of pace. All of the squares – I’m not sure there’s a term for them, but those in the top-left corners where both across and down answers that share a number start – anyway, all of those squares are singular clues with two part answers. They’re all fictional characters with a reduplicative first and last name (using name loosely in some cases), and all pretty “first tier” famous, which as just as well since those squares aren’t really properly checked. The first part goes across and the second down. I’d say DOCTOR/DOOM is nowhere near as famous as the others, but pretty reasonable all the same, especially as DOCTOR is not a difficult guess. The clues are also alliterative, but since the letters don’t match, it doesn’t help the checking issue.

It’s a busy theme, and Mr. Haight has taken advantage of the LA Times’s more generous black square limit of 43. I’d say that was a good choice, because a busy theme and an ambitious grid can make the rest of the puzzle go to hell in a handbasket pretty quickly.

I went through a lot of wrong answers for the second part of [What may be resorted to when words fail], USINGFORCE. I first thought of sign language and had USINGHANDS. Then FDA redirected me and I tried USINGFISTS – too precise that time.

One old-timey easter egg I found, at least I think it’s an easter egg, it may just be a happy accident too, is ROE/TOMMY in adjacent entries. He was a pop singer who had a string of bubblegummy hits in the 60’s. This track is one my mother’s favourites: Sheila . That also triggered me to look up the line I was hearing as “Worse than double happy…” which is apparently “We’re so doggone…’ Close enough. 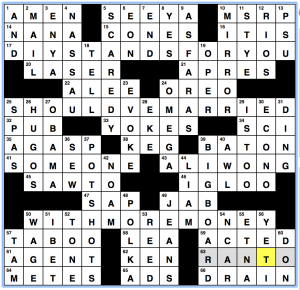 It’s after Christmas, I’m currently typing this from the Minneapolis airport, and today’s BEQ is a quip puzzle, which is possibly my least favorite genre of crossword.  Still, this week’s quip is from ALI WONG (43A), whose comedy special Hard Knock Wife  was one of my favorites this year.

It’s a good, if awkwardly broken-up, quip.  Quip puzzles really depend on joke quality, and this one has a solid punchline

In the grid: pretty standard stuff!  Some interesting downs like NASSAU, POT SHOTS, and BIG BOARD.