The Chronicle of Higher Education crossword is on winter break till after the New Year starts. It’ll also be going print-only, but we’re working on retaining online access to the puzzle files. Stay tuned! (And forgive me if this was already hashed out this past week when I was offline!) 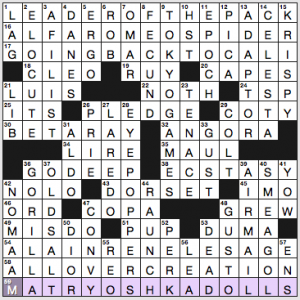 When it comes to themeless crosswords, is there anything more polarizing than triple-stacks and quad-stacks? Some people love ’em because they look cool. Some people hate ’em because they too often require a lot of compromises in the fill. (Presumably some people are entirely neutral on the matter and take little notice of the grid pattern…) I am usually in the “hate ’em” group, unless the fill contains very little that irks me. This one has some really great 15s, one lousy 15, and lots of fill that leaves me wishing for a puzzle without triple-stacks.

The goodies: MATRYOSHKA DOLLS with the recursive clue 59a. [Things that contain 59-Across that contain 59-Across that …]. “GOING BACK TO CALI.” ALL OVER CREATION. Footballish GO DEEP, “NO, MA’AM,” EYE-POPPERS, the Olympics’ TOKYO GAMES, and SMEAGOL. Have you seen the anti-Brexit ad featuring Andy Serkis as a Gollum/Smeagol/Deagol version of Theresa May? If you’ve seen the Lord of the Rings movies, this will sound quite familiar!

The price paid for the six-pack of 15s is fill like AFI LIST (which I don’t think makes the grade as a crosswordable phrase), HST (but thumbs-up for the update from Truman’s initials to Hawaii’s time zone, [It’s two hours behind Pacific: Abbr.]), KRISPY (bizarrely clued as 15d. [Hard to eat quietly, in adspeak], when the most prominent use of “krispy” is in Krispy Kreme doughnuts, which are not actually crispy or noisy to eat), RUY, TEN-ACE, NOLO, MISDO, ALDO, PRIE, REO as the 82-years-gone car, and letters ENS. There’s also one 15 I didn’t care for one whit: 54a. [“Gil Blas” author], ALAIN RENÉ LESAGE. Please comment if you have read Gil Blas or anything else by Lesage, and only if you did so before encountering the title and name in crosswords. 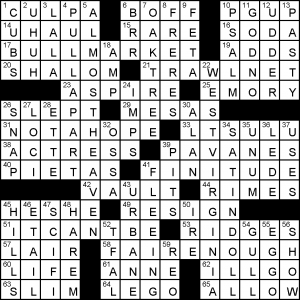 I don’t know if this puzzle represents a policy change from the LA Times or not. As far as I can see, a quasi Saturday themeless has arrived a day earlier this week, with a themeless block/word count of 33/72. I don’t think I’m averse to the idea of two themeless puzzles a week if the quality is there. As far as I know, Rich Norris receives the most submissions for Saturday (or did, at one point anyway).

I say quasi, because there are two mini-themes. In the downs – ALMOSTHEAVEN/WESTVIRGINIA, though if Wikipedia and others are to believed, primary songwriters Danoff and Nivert had little experience of WESTVIRGINIA and the song was initially set in Massachusetts. They also had Johnny Cash in mind as a singer… (RIDGES may also be a nod to “Blue Ridge Mountains”.

It is typical of these fish-nor-fowl puzzles to not have a lot of other flashy entries. There’s a lot of other dialogue going on the puzzle: SHALOM, NOTAHOPE, ITCANTBE, FAIRENOUGH, ILLGO, UHUH… LEDE is also a perfectly reasonable entry with friendly letters, and yet one I never see in puzzles as much as I expect to.

Most weeks, the clues in the LA Times don’t get too wild until Friday. This week, even the Friday was pretty uneventful. I do note that “Kalamata olives” in the FETA clue would make a good themeless seed (although as a 13/14, they can be hard to work around.)