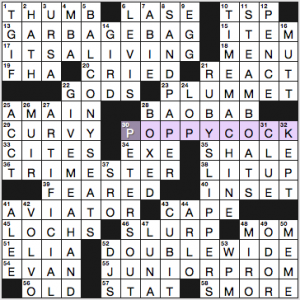 If you’ve been solving obsessively for some time, you’ve likely reacted to puzzles based on the byline alone—some names evoke a groan of disappointment, while others make you perk up with anticipation. Robyn Weintraub’s themelesses are puzzles I’m glad to see. Another constructor who’d enjoyed this puzzle posted his praise to Robyn’s Facebook page before I’d done the puzzle, and I commented that my eyes lit up when I saw her byline. Imagine my surprise to find LIT UP in this grid!

I liked the puzzle didn’t love it. My standards for Robyn’s work have shot up, so I wonder if this puzzle was actually one of her earlier themeless submissions. There are so many nice longer entries, but I found myself deducting points for AMAIN ELIA ALEE SRO ABIE—in a Saturday puzzle with a dozen zippy longer answers. Those bits aren’t great, but they’re all legit, so …

Faves: GARBAGE BAG, “IT’S A LIVING,” PLUMMET, POPPYCOCK, academic TRIMESTER (Carleton College has trimesters and its own system of credits, leaving me unable to comprehend every other college’s scheme of credit hours and semesters), DOUBLE-WIDE trailers, JUNIOR PROM, “GIVE ME A HAND,” PETERS OUT, RUBY SLIPPERS, and TIME MACHINE.

Theme: R’s in particular phrases are moved to a later point in their words. 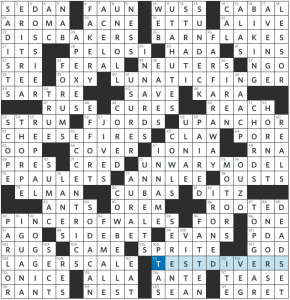 Not bad wordplay. There’s no consistency in how far the R’s are moved, but I didn’t find that to be a problem. I like LUNATIC FINGER even though the clue doesn’t make much sense. Reminds me of alien hand syndrome. My son doesn’t have that disorder, but when he was little and he would get excited (usually playing a video game), his hands would seem to shake of their own will and his arms would go up in the air. It got to a point that he didn’t even know he was doing it. 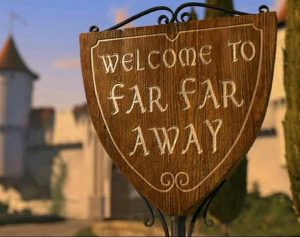 Nice long fill in FAR FAR AWAY, ECCENTRICS, SODA CAN, TOP GEAR, COW BELLS, SUN DECK, UP ANCHOR, DEAD SET, SIDE BET, INNARDS, NOGGIN, and IGUANA. I’m less excited about weird plurals REALS [Numbers with no imaginary part] and CUBAS [Two of the Gooding family] and partial HAD A [Merle Haggard’s “I ___ Beautiful Time”].  But that’s about all that I scowled at. 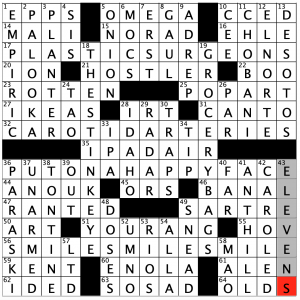 A bit tough? Am I tired and sleepy? I don’t want to seem overly confident, but after solving these Saturday LAT puzzles for several years now, and puzzles in general for 40+ years, I know when it takes longer than normal. That number varies for everyone, but for me, nearly 9 minutes on one of these is on the longer side. So either it was tougher or I was sleepy. This puzzle has four 15-letter entries crossed by two 11s, so in addition to probably being on the tougher side, it is quite a feat of construction. It is also suggestive as to what makes bad fill, and in a tougher puzzle the bar is a little different, but on either count I found virtually nothing icky. This was a fun puzzle! 4.6 stars.

That is all! There is football on today! 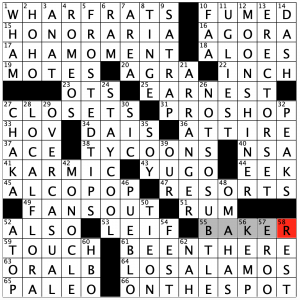 Not bad. No accurate time since this one was stopped and started several times. I just now got reacquainted with Xword for solving as an alternative to Across Lite. I flopped back and forth between computers on this one, and my timers were all over the place. The total time was in the 12-13 minute range, which is a phenomenal Stumper time for me, especially if my guess is correct! This is Brad Wilber and Matthew Sewell’s pseudonym, so this time on a puzzle by these two makes me feel even better. I could be rounding into ACPT form! Booking for that will start soon for me! A solid 4.5 stars this week.

A few high points for me: