I hope your 2018 resolution wasn’t “Make no mistakes in crosswords this year.” Imagine the poor soul who was so close to accomplishing that feat ending the year with this one.

THEME: DROPPING THE BALL (A note accompanying the crossword reads “Certain letters in this puzzle, when read clockwise, will spell out two different familiar phrases.”)

The resulting phrases read HAPPY NEW YEAR for the down clues and AULD LANG SYNE for the across.

Whew. Just typing that up was exhausting.

This last WaPo puzzle of 2018 is bound to frustrate a number of solvers. I want to preface my review by saying that I truly appreciate that Evan is willing to take huge risks, which is why I always look forward to solving his constructions. The most memorable puzzles I’ve solved this year came with either Gaffney or Birnholz as the surname in the byline.

That being said, it didn’t quite feel like this puzzle knew what it wanted to be, and from this solver’s standpoint, it wasn’t all that fun to figure out. Was I to insert opposites? Was the clue

wrong? Or was the answer wrong? I didn’t even notice several typos in the clues until typing them just now (“Pride or Prejudice,” “Downtown Abbey,” Dec. 30 et. al. to name a few).

While I think that the inconsistency in the cluing was the whole purpose, I found myself simply skipping over starred clues. When a puzzle’s theme doesn’t assist me in solving the puzzle and I gravitate toward the standard fill instead, I have a tendency to lose interest. Also, besides the phrase DROPPING THE BALL being related to the Times Square ball drop in a tongue-in-cheek way, I’m not sure what HAPPY NEW YEAR / AULD LANG SYNE have to do with all of the errors. Had I not read the note that we were to uncover two different phrases, I can’t even be certain that I would’ve figured out that there were rebus squares at all.

Anyway, while I’m not in love with this puzzle, I am very much looking forward to what Evan has in store for 2019. Keep ’em coming, Birnholz! Your risk-taking is yielding seriously high payoffs… and it’s bound to come with a few that raise an eyebrow. I feel like this one was asking a bit too much of the solver.

4 star risk-taking with a 2 star solve experience puts it at 3 stars for me. 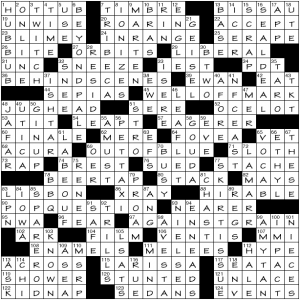 Wherein phrases have shed their internal definite article to set up wackified new interpretations. I like the gimmick better than the title. “Duh” for “the” is a bit too exaggerated an accent for me. Are we calling it old-timey Brooklynese, perhaps?

Some of these are both clever and amusing. 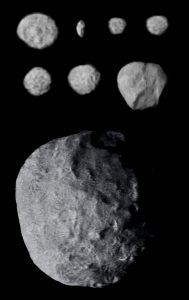 (Larissa is the object in the top left)

So I guess this is a good spot to end the write-up.

Wordplay, how I love thee. This is a fun theme.

The title can be read as “Calling For Th” – each theme answer has a TH in place of an S. Lisping wackiness results. 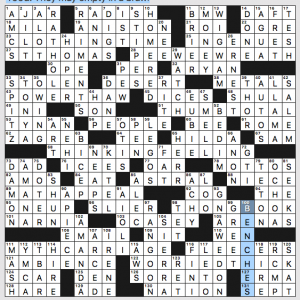 The theme is consistent, all the base phrases are in the language, and some of them made me giggle (especially THONG BOOK. Those of you with teenage daughters will understand).

What I didn’t know before I did this puzzle: that Jennifer ANISTON won an Emmy for “Friends.” 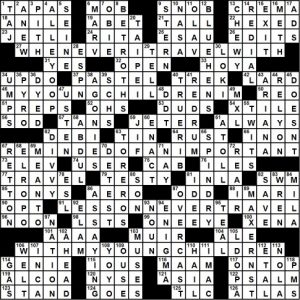 I like quip crosswords. but this one struck me as meh. It took me about 20 minutes to solve. I started doing it by hand and then switched to the puz file. I zipped through the upper third, using vertical clues only, paying no attention to the quotation. As I watched ANILE appear, from childhood I recalled this word as discriminatory, subjective, and negative all at once. It’s still in my word list, but it’s scored very low.  Best I can tell, it’s not been in the NYT in 18 years. It’s been in the LAT syndicated puzzle five times since 2000, but not since 2013. The typical clue for it is [Old-womanish], which BEQ used, though [Doddering] has dominated for the past decade.

In any event, I say strike ANILE from word lists, and I’ve now done so. Being in the upper left, it gives a bad first impression. I ran a few quick trials of that upper left area, leaving ALLEY OOP in place (nice clue for it, btw, [Basketball pass]–dictionaries say the term refers both to the overall play and to the pass that enables the play where a leaping player receives a highly-arced lob and dunks the ball all in one motion), and feel pretty comfortable in saying that a fill of equal or higher quality is available without resort to ANILE.

The Jim Gaffigan (who? Oh, okay, I see now. He is the stand-up comedian who, at jimgaffigan.com, is identified as “Noble Ape” and whose “clean” humor tends to be about “fatherhood, laziness, and food.” But he has had three Grammy nominations, wrote a book called “Dad is Fat,” lives in Manhattan, and has a familiar enough face that I suspect I’ve seen him perform–and probably liked him) quotation around which this puzzle is built is

That’s 103 theme letters, not so many as to create a horrible fill. And indeed, the fill is up to BEQ standards, with the following catching my eye, mostly in a positive way:

99a [Jack of hearts feature] ONE EYE–My earliest memories of learning to play poker include hearing the dealer proclaim, “Deuces and one-eyed jacks are wild!”

117a [Winning] ON TOP–This prints out pretty close to 102d, AHEAD, which could have been clued identically, but wasn’t.

12d [University of Delaware athletes] BLUE HENS–As a progressive, feminist-oriented male, I love the concept of men athletes competing as hens. I wonder, though, how my female counterparts feel about a standard phrase in the U. Del. athletics web pages for women’s sports, “Meet the Hens”?

45d [“Almost ___ count”] DOESN’T–This reminds me of the words of so many high school and junior high school coaches, who spoke these words as though they came from some holy text.

65d [Laundry cycle] SPIN–DRY–I wonder if anyone has ever before raised a nit about this entry in crosswords. I cannot remember ever seeing this exact lingo on an appliance. My washer has the notation “Rinse+Spin.” My dryer has the phrase “Time Dry,” though, of course, it does spin the clothes. Merriam-Webster carries spin-dry only as a verb, meaning “to partly dry (washed clothes) in a machine (called a spin-dryer) that spins them very fast” (yup, they split the infinitive and they use the word very). Oxford‘s treatment of the same word goes like this: “Extract water from (washed clothes) using a machine that spins them in a revolving perforated drum.” Oh, forget it!

112d [there are other names as well] ET AL.–Good fresh clue for a standard 4-letter ILSA.

This was a reasonably fun crossword, considering that I did not react positively to the quotation on which it is based. It has, I think, too much duplication, what with the word travel appearing three times and some of the other words appearing twice. That’s the kind of humor that works better vocally than it does in writing. Not sure whether that makes it dry, wry, or both.

And again this week, the puzzle arrived with notice that, starting next week, there will be no distribution of this item by email, with the implication that the series will be running in the Boston Globe dead-tree edition only. I could be wrong about that, maybe there is an online edition with the crossword as a PDF or the like. But, in any event, I don’t believe that I will be reviewing the puzzle anymore. It’s been a short stint, but it’s been fun. (And, if I’m wrong, I’m sure someone will be telling me so before midnight tonight.)