Happy Last Puzzle of the Year!

This is a nice Monday theme. I figured it out early on and still enjoyed the revealer at the end. Not all the fill is as Monday-friendly as the theme. 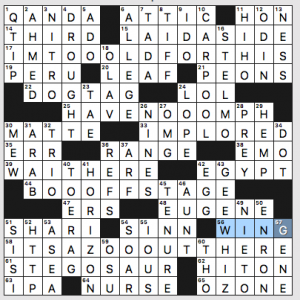 Each theme answer has OOO somewhere.

We have two 15s in the theme answers and four nice 8-letter entries: LAID ASIDE, IMPLORED, WAIT HERE, and STEGOSAUR.

What I didn’t know before I did this puzzle: when I said some of the fill wasn’t Monday-friendly, I was referring to 40d [Scoundrel, in British slang]. I have never heard of a TOE RAG.

The hidden word of the day is EVE (63d, [Day before that’s found in the starred answers]). 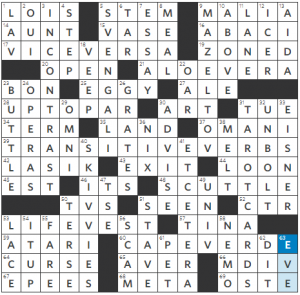 I find hidden word themes to be less and less interesting, especially when there’s no “reason” (a clever word or phrase) explaining why the word is hidden. (I should talk. I have a hidden word theme over at Universal Crosswords out today, but at least it has a revealing reason.) So this theme didn’t thrill me, even though the entries are solid enough.

I enjoyed the fill much more, though, with entries like SVENGALI, MAZEL TOV, SKIVVIES, TAROT CARDS, and SCUTTLE.

SVENGALI reminded me of the Seinfeld scene where Elaine mispronounces the word. Then, who should show up a few entries later but Julia Louis-Dreyfus herself in the clue for VEEP. Don’t know if that was purposeful or not, but it was fun.

Also, I recently had an encounter with TAROT CARDS (31d, [The Fool, The Hermit and The Hanged Man, for three]) in the puzzle app “Rusty Lake: Roots.” If you like your puzzles with a touch of the macabre, and you don’t mind creepy weirdness, you could do worse than any of the Rusty Lake games. (Seriously, they’re like Twin Peaks with puzzles.) Start with “Cube Escape” series since they’re free.

Back to the puzzle. What do you think of the bizarre entry BUTTLE (23d, [Work in a manor, facetiously])? Not one I’ve ever heard, but the word shows up in multiple dictionaries. It’s also in Urban Dictionary, but the definition is, uh, entirely different.

That’s about all I can muster. Three stars for the theme, 3.5 for the fill, which puts the whole affair at about 3.25 stars.

Ironically, this puzzle wasn’t a pain at all! 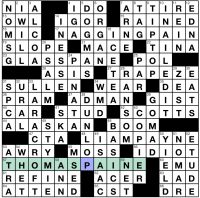 This puzzle was easy breezy and every bit as strong as you’d expect from a Burnikel puzzle. My only real challenge was filling in the PA_NE in the last two theme entries, but thankfully those crosses were easy enough. Oh, and INESSE and MSED, which were a bit tough for a Monday. Even with those, though, I sailed through this grid in one of my faster Monday times recently.

#includemorewomen: It can sometimes be lost behind the initials, but C. C. Burnikel is one of the most prolific woman constructors in CrossWorld – it matters that she consistently publishes fantastic grids! In this grid, she includes women like NIA Vardalos, TINA Fey, EDNA Ferber, and LARA CROFT. These women are outnumbered by the men in the grid for sure, but Burnikel has inspired so many women in the field that she certainly counts as fantastic representation/inclusion herself!

I hope each of you has a wonderful end to the year and a fantastic, prosperous, and fulfilling 2019! 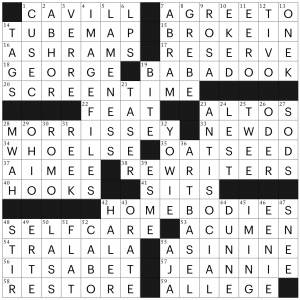 Happy Monday, all! It’s the last New Yorker puzzle of the year, after last week’s delightful series of puzzles themed around the year in culture.  Those felt a skosh easier than the New Yorker’s typical output, but that felt like a natural part of how the puzzles were themed, and I loved getting a great review of movies/books/etc. from earlier this year.

We’re not here to discuss those puzzles, though, we’re here to discuss the latest entry from Anna Shechtman.  This was a grid I needed to trust myself more on – I held back on putting in my first guess on a bunch of these clues because I didn’t have any crossings, only to come back when I did and find my intuition was correct.

An example: I figured 1A‘s “Twenty-first century Superman” was Henry CAVILL but waited until I had ABHOR and LPS (“Spinning supply”) going down to enter it in.

Other things I liked: horror villain (and gay icon, as the New Yorker highlights as this weeks’ post-puzzle clue) The BABADOOK, SCREEN TIME, HOMEBODIES (though I disagree with the notion that they’re necessarily ANTISOCIAL, as its linked clue in 23D suggests), radical SELF CARE, I Dream of JEANNIE, and “TIFFS, e.g.” cluing IMAGE FILES instead of FILM FESTS like I initially tried to make work despite not having enough letters for the grid.

Your “Pope of Mope” and mine, MORRISSEY 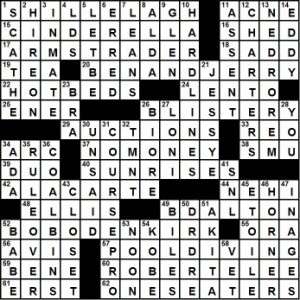 This one for me was a bear. Finishing in just under 30 minutes, I found I had numerous errors, as expected. I had no idea on 1a [Irish country club] SHILLELAGH even after getting SCATHE, HIREON, INMATE, LEANS, and GLEN. Make of that what you will: I’m a moron, or it was a tad too hard. Maybe a little of both.

Some of the clues upset me, but that could be because I was a bit pressed for time. 19a [Parlour cup] I thought should have been “cupful” or the like. As worded, the clue touted me off of TEA.

37a [Short person’s condition] had me searching for a noun. The answer, NO MONEY, is not a noun.

57a Water event with a board POOL DIVING–I got diving, but would never have inserted pool had it not materialized from the crossers.

10d [Uncompromising adherences], as a clue for HARD LINES, just makes me want to say that there’s something wrong somewhere. What is an adherence? My adherence to a hard line is not the hard line itself, is it?

And these I just didn’t get:

In fairness, I really liked some of this puzzle: