Title: “Déjà Vu”
Prompt: The meta for this puzzle is the mega-meta for the 2018 contest, a popular song from the 1980s.
Answer: “Here I Go Again” by Whitesnake 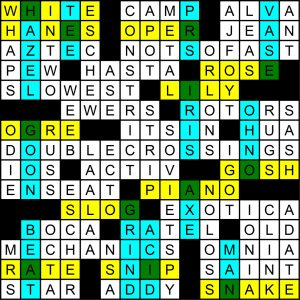 Mega-meta time! Once again my procrastinating nature kept me from solving the mega-meta early this year. “I’ll look at it next month,” I kept saying, and here it is just a few hours before the year 2019. So it’s now or never!

Luckily this year’s mega-meta wasn’t as difficult as in previous years, though it was still quite elegant. The first thing you notice is that a dozen of the Across clues are left unclued, with just an em-dash. So instead of solving “Downs only” we’re solving “mostly Downs,” which wasn’t enough to make the grid significantly tougher than a Downs only.

I noticed something early in my solve: at 9d. [Letters on some vintage phone buttons] was PRS, but that clue also could’ve worked for the unclued OPER at 15a., which crosses PRS. I soon came across a few more similar cases, like the unclued HANES crossing TEE, which was clued as [Undershirt choice]. And then I came to the revealer across the middle: 40a. [Betrayals, and, in a way, what you’ll find 12 times in this puzzle after filling in the missing clues] = DOUBLE CROSSINGS.

Naturally I wondered whether the twelve crossings of the doubly-clued pairs would spell out the apt song title, which they did: Whitesnake’s 1980s hair metal anthem “Here I Go Again.”

Not a tough meta but a clever one nonetheless, and I was happy for an easier mega-meta after the tough final four of the year. Let’s go with 4.50 stars.

So Year 7 of the Muller Music Meta comes to an end, and it was another great one. The November and December puzzles in particular were magnificent, both in my top 10 all-time Mullers. August was excellent as well (refresh your memory on all these here).

I hope/believe we are getting a Season 8? These are great fun and I’m continually impressed by Pete’s ability to keep coming up with new ideas, even while restricting himself to the specific category of music. So Pete, can you confirm/deny/neither confirm nor deny in comments whether there’ll be a Season 8? I’ll be here blogging it if so. Thanks for another great year of the MMMM in MMXVIII, and I hope to see it and all of you for MMMM in MMXIX!