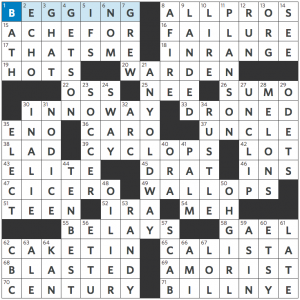 This week we (and we’re using the plural pronoun deliberately, since regular blogger Raul Ellaray is herein joined by solving partner Sally J. Reese) are looking for a two-word phrase. Let’s start with the nine starred entries:

And that center long down entry seems relevant: [21d: Indiscriminately]: ANY OLD WAY.

Raul: Your solving team was stymied by this one, following many loose ends and rabbit holes thither and hither. It may have been the combined mental fatigue from … how many metas were we solving this week, Sally? It felt like at least a dozen, what with a Week 4 MGWCC, a literal handful of year-end GNU YORE KIRK ROSS WHIRRED — er, New Yorker crossword puzzles, an AVCX contest, contests from Andrew Ries and Will Nediger, and BEQ’s mega-meta in the NYT’s Puzzlemania which in my house has mostly functioned as a cat-sleeping mat.

Sally: You’re ahead of me, Raul — my cats can’t even get to the mega-meta, because it’s sitting under a stack of other puzzles I haven’t solved yet.

Raul: Plus all the emotional energy expended this time of year on various celebrations and families and visitors and friends near and afar. (Side note: Thank you for that holiday card with your adorable family, Sally!) But let’s get back to the puzzle — we tried anagrams, we noticed shared letter strings, we tried putting all the starred entries in alphabetical order….

Sally: Did you notice CHEF inside ACHE FOR? Chefs take orders, just like, um … well, there’s nothing else in the other entries. Never mind.

Raul: At that point, I was all THAT’S ME — FAILURE. Right there in the grid. And we were both already on the board for the MGWCC (see very long post on that after the deadline) so it was weird. Speaking of CHEFs, I decided to take a break to cook and host a seven-course dinner party for ten people, and a splendid time was had by all.

Sally: I used my break to take my daughter to see A Night at the Opera — and she complained that it wasn’t Duck Soup, so I guess I’m raising her right. (Not that either of those movies provide any help with the meta.)

Raul: You can’t fool me. There ain’t no Sanity Clause! Uh … okay, back to the puzzle. At this point, did we ask for a hint?

Sally: We did indeed.

Raul: And one of our solving buddies very patiently counseled us to consider the title, and the concept of order. A very basic type of order, that is indeed often clued in crosswords as [The basics, e.g.]. And we’re thinking, uh, would that be like alphabetical? Is that an order?

Sally: But we tried that! And AAABBCCIW still isn’t a word, no matter how many times I look at it!

Raul: ABACI? ABACAB? WICCA? So we went back to our friend to ask for more hintage and I could just feel the schadenfreude emanating from the internet. Lol, Sally and Raul can’t get this!

Sally: Seriously, if the answer involves DARTMOUTH again we’re going to have to quit metas all together.

Raul: Sally is referring to an unfortunate incident in my past. Let us never speak of it again. Okay, where were we? Sanity clause? Look more closely within the themers, not among them, said our friend.

Sally: Hmm, the letters in CYCLOPS are basically in order except for the Y. I wonder if the other theme entries might follow that pattern.

Raul: Hey I wonder that too? And whaddayaknow:

Raul: Don’t mind if I do! And there you have it, folks. As we kiss the ass-end of 2018 goodbye, best wishes from Sally and me for the new year. Happy metas, happy megas, happy solving to you and yours. We’ll see you in 2019.