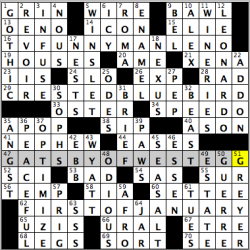 Happy New Year, everyone! I am sure all of you are starting your 2019 in style and, if you’re starting it with crosswords, that’s even better! Today’s grid is a homage to the start of the New Year, with each of the four theme entries being a variant description/interpretation of  the repeating clue, “Jay,” with the final theme entry, FIRST OF JANUARY, literally describing the first letter in the word “January” and, also, what today’s date happens to be (62A: [JAY (or a time to make a fresh start…Happy New Year!)

Lots of long, lively fill outside of the theme entries in this grid, and loved the clue to WINERIES, something that I, sadly, have never been to in my life before (11D: [Pressing concerns in California]). Throw in OENO and this grid surely is suggesting that you should have a nice, soothing drink during your New Year’s Eve/Day (13A: [Winemaker’s prefix]). Oh, and then there’s SIP as well in the grid, so, as long as you’re of legal drinking age, you can’t help but have a wine glass in your hand at the moment (38A: [Wee champagne sample]). Definitely get jealous when I see friends of mine on Facebook post pictures of their times at wineries. If there is a winery in the Bay Area that I should visit (hoping to be in the area in March), let me know of a couple of good spots. (Red wine drinker here, in the Malbec/Bordeaux mold.)

“Sports will make you smarter” moment of the day: PEP (27D: [Vigor]) –  Regarded as the best coach in world football (soccer), Josep “Pep” Guardiola is currently the manager of Manchester City Football Club in the English Premier League. As a player, Pep played 263 games as a midfield for famed soccer club FC Barcelona, helping the team win the Champions League in 1992. Pep embarked on his illustrious coaching career when he became manager of Barcelona in 2008, where he led the Blaugrana to three top-flight Spanish league titles (2009-2011), two Spanish Cup/Copa del Rey titles (2009, 2012) and two UEFA Champions League trophies (2009, 2011). Pep then led German superpower FC Bayern München to three straight top-flight German titles (2014-16) before arriving in England.

I hope you all have a PEACEFUL (36D: [Serene]) time in ringing in the new year, and also hope you OPTIMIZE the time you have in being with family and friends while putting 2018 in the rear view (37D: [Make the best of]). Thank you so much for the time that you continue to devote to reading the thoughts of all of the bloggers and reviewers on Fiend, especially to start the new year! Here’s to you! Have a wonderful day, everyone, and, as always, keep solving!! 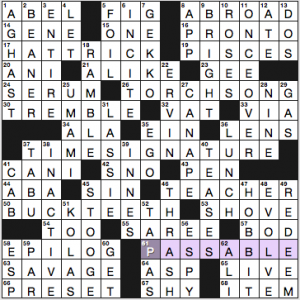 Okay, including 2-Down is a terrible way to start the crossword’s year. In the interest of expediency, let me refer you to Jeff Chen’s discussion of that entry in his notes at XWordInfo. Baseball fans call a [Pitch to the head, informally] a bean ball, and BEANER is more commonly used as a racist slur aimed at Mexican people. Jeff also points out the quick-and-easy fix, changing ABEL and ANI to AHEM and ALI, making 2d HEALER instead (that would also require a change to the opposite corner’s ALI, which could easily be ADS instead). It pisses me off that (a) the constructor included this in the grid and (b) that Will Shortz rationalized its retention when it would be so simple to fix it. Can we all try to be better in 2019, please? To expect more of ourselves?

The theme revealer is PASSABLE, and the theme answers begin with things that can be passed. HAT TRICK, pass the hat for donations. TORCH SONG, pass the torch to your successor. TIME SIGNATURE, pass the time. BUCK TEETH, pass the buck and avoid accountability. 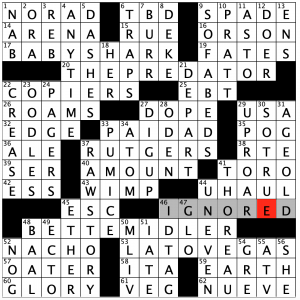 For a year-end review, how about some low points? Kind of like ESPN’s Not Top Ten plays of the year. You get the idea:

Don’t think I won’t post that Baby Shark video just to annoy you! My 6-year-old knows all about this. Nice final compilation for 2018. I wonder what dreck will come about in 2019? 4.6 stars. 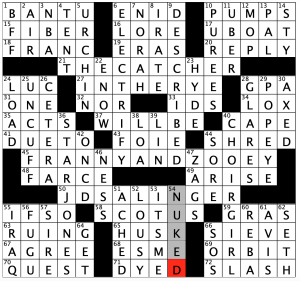 The constructor has a cool name! And we feature an author I’ll bet you didn’t know has a birthday on New Year’s Day:

I don’t think I have ever ready anything by this author. That is on me; I am sure these are in the public domain by now; if not, it cannot be that expensive. I think I will try to read more in 2019! Look for me on GoodReads. 4.3 stars.