The puzzle title comes from Bond, James Bond, of course, and the revealer at 96a highlights one of the actors who played the famed spy, SEAN [Connery, whose speaking style is played on in this puzzle]. The theme answers have S sounds changed to SH sounds with additional spelling changes as needed in the affected words. 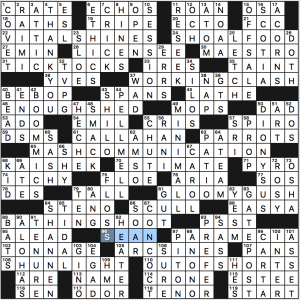 Some other constraining factor is in order, I think. First, for consistency’s sake, I would only use words with SH sounds at the beginning. (Whether to have that word first in the phrase or later is less important). Second, since the basis of the puzzle is “playing on” (more like “making fun of,” if you ask me) the way a certain person speaks, perhaps theme entries could be limited to verbal phrases along the lines of “ENOUGH SHED.” Other possibilities might include “FOR PETE’S SHAKE” or “THIS SHUCKS” or “SHAVE THE WHALES.” Third, I would reduce the number of entries, because…

With so many possible theme answers, it’s tempting to fit in as much as you can. But this reduces the quality of the surrounding fill. Yes, the long stuff here is fine or even good (PELL-MELL, PARAMECIA, DIONYSUS, BOOM MICS, MINI MALL, “THANK YOU,” and CALLAHAN), but there’s a lot of scowly stuff as well (DSMS, OSA, ECTO, EMIN, CRIS, A LEAD, A NO NO, RESEEK, OCH, and EMIL crossing SHILO). With fewer theme entries, you’d still have strong long fill, but you could clean up the short stuff as well.

In the end, there’s just too much here and it’s too wide open of a theme. It’s not bad, but certain improvements could be made. A tighter theme would be more enjoyable and result in cleaner fill. 3.0 stars. 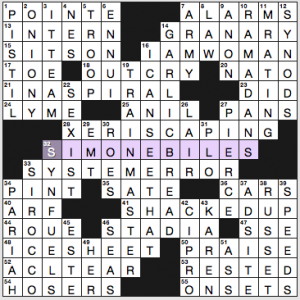 Maybe a bit on the easy end of the Saturday NYT spectrum, yeah?

Favorite fill: IN A SPIRAL, XERISCAPING, SIMONE BILES, SHACKED UP, ACL TEAR, SIROCCO (I like those wind names), “I CAN SEE THAT,” and GARLIC BREAD.

I feel lied to: 14a. [Farm feed holder] is a GRANARY, and when I was a kid, there was a rural town nearby that had a quaint shopping center inside an old agricultural building, and they called it The Grainery. They couldn’t just spell it right? 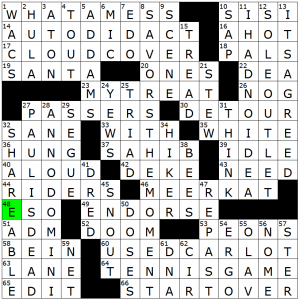 Looking forward to seeing Jeffrey in a couple of months in Stamford. I always enjoy his puzzles. This grid image was captured from the Xword solving program for PC. I have been using it on my PCs instead of Across Lite for the last week or two. I think it also reads .jpz files as well. Like Across Lite (the PC version, anyway), you can also customize fonts that appear. It seems a little easier to use, but they both accomplish the same thing, so it boils down to personal preference. If there is something I am missing about either, please let me know.

I digress. Jeffrey’s grid is a 70 worder with, in typical LAT fashion, a low amount of dreck. Slightly challenging, as have been the last few LAT Saturday puzzles. Either I am getting slow and old or they have ratcheted up the difficulty level just a smidge. And that is a good thing! They were too easy, in my opinion. A solid 4.2 stars for this one. 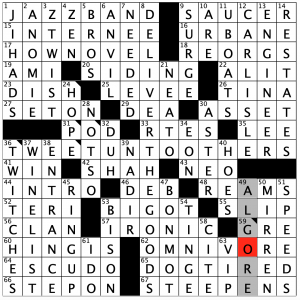 This Les Ruff puzzle (Stan!) started out a little “less rough,” but ended up Stumping me as it usually does. There are some great entries in here, and lots of misdirection that led me down a couple of rabbit holes that were incorrect. The entry at 36A I assume was the seed entry (see below), and as usual is something I have not heard before. I would say I am getting old, and I am not hip to what these young kids say, but Stan is older than I am, so that doesn’t hold water! Stan’s puzzles are always fun and clean; a solid 4.5 stars this morning.

A new Panda Magazine comes out today, so there goes my Saturday. We just finished the entire Puzzle Boat 5, and it is magnificent. Yes, it took over two months to finish all of the nearly 100 puzzles. I still highly recommend. Check it out here.