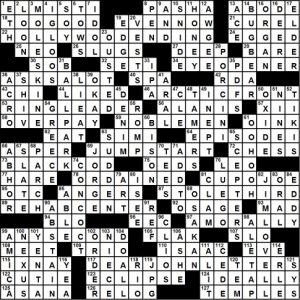 Upon finishing this puzzle in 27:50 (my Sunday average is about 40 minutes), I thought, “Hmm. Nice title + clever, punchy clues + a reasonable theme = fabulous puzzle experience!” (Yes, I think in plus signs, equal signs, and exclamation points.) And that is what I had with Zhouqin “C.C.” Burnikel’s 58th New York Times crossword puzzle. (By the way, where does she find the time and talent to construct as many puzzles as I see appearing under her byline?!)

The only problem was that I had not gotten the theme at any point during the solve. And I didn’t see what the gimmick was, even though the entire completed grid was sitting there, staring back at me. Sheesh! Only hours earlier, I’d volunteered to sub in for Amy, for the first time ever, to write up a Sunday New York Times crossword! So, there I sat with visions of sitting until midnight or longer. But, … one by one, I started going over the theme entries to see how DEAR JOHN LETTERS could be a [… literal hint to the answers to the starred clues?] (A question that I simply fought off was whether  the foregoing quote from the clue for 117a, having as it does the word literal and a question mark–signaling, in Patrick Merrell’s memorable words, “that wordplay or trickery is afoot”–is an oxymoron.)

I wish I could have taken a selfie of my smiling face when the aha moment hit. Under such a photo I might place this caption, quoting my thoughts once again:

“HOLLYWOOD ENDING–Hollywood ends with a d. EYE-OPENER–Eye starts with an e. ARCTIC FRONT–Arctic’s front is a. RING‘s LEADER = r. I got it!”

From JUMP-START, we get the J. STOLE‘s THIRD letter is o. REHAB’s CENTER is, of course, h. And we wind it all up with ANY‘s SECOND letter, n.

Wow! My favorites, in the non-theme fill were these:

Grats to C.C. on an excellent piece of work. And thanks!

And I’m still uncertain whether the clue for 117a is an oxymoron. But you know what? That uncertainty adds, rather than detracts, from the overall positive experience provided by this puzzle! 4.5 stars.

After back-to-back weeks of WaPo puzzles with quite a bit of bite, I’m starting 2019 off with a personal solve record of 9:06! 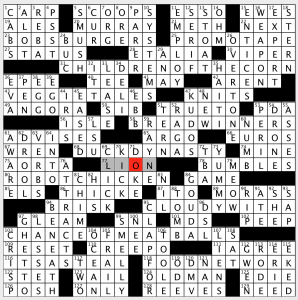 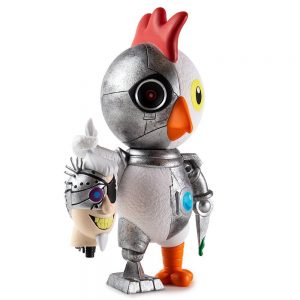 Okay, perhaps I shouldn’t pat myself too much on the back for setting my 21x speed record- most of these themers were served up on a silver platter (pun intended). Although the only one of the set I’ve actually ever watched is the quirky ROBOT CHICKEN, the titles were mostly very familiar. I’ve never heard of BREAD WINNERS before, but it was definitely inferable. That area of the grid was the last section to fall for me since I had DIRGE (haha!) for DRONE [Bagpipes emanation] and BUFFY for RAYNE [Protagonist of a vampire video game franchise].

Both CLOUDY WITH A CHANCE OF MEATBALLS and CHILDREN OF THE CORN I associate with the big screen, but they were produced for TV as well. And besides, don’t you secretly love a good gimme with high-real estate when you have a chance a beating your average time? The former entry being split across two rows may irk some, but it doesn’t bother me at all. Also, It was a common practice of Evan’s predecessor.

Anyway, a low-calorie way to kick off the year!

Solid puzzle, and easy to chew. 4 stars from me. 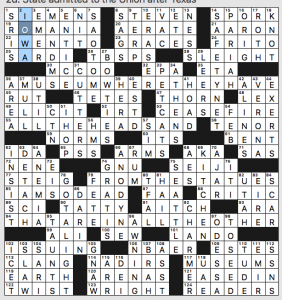 Even when the quip is funny, I’m not a big fan of quip puzzles, and this quip doesn’t really amuse me. I guess it’s a good thing that it was kind of predictable, since that made the puzzle easier to solve.

So it’s a quip. We have the quipster at 8a and 123a: STEVEN WRIGHT. The quip, spread out over seven entries: I WENT TO A MUSEUM WHERE THEY HAVE ALL THE HEADS AND ARMS FROM THE STATUES THAT ARE IN ALL THE OTHER MUSEUMS. OK, then.

A few other things, since I have nothing more to say about the theme:

What I didn’t know before I did this puzzle: that more than 400 million M AND Ms are produced daily.