This is a twist on a vowel progression theme, and it’s well done.

The theme answers shift A-E-I-O-U down the grid, and each one has a rhyming counterpart. 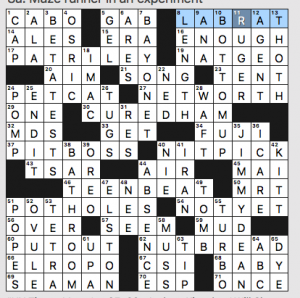 All solid, in-the-language phrases, easily gettable from the clues. A good Monday theme. Despite the vast amount of theme material, the fill is pretty good.

What I didn’t know before I did this puzzle: that RUGER is America’s largest firearm manufacturer.

Now this is how you make a Monday grid! The theme is simple but elegant, and the fill is fantastic. We’re given food dishes whose first word can be a slang term for your cranium. 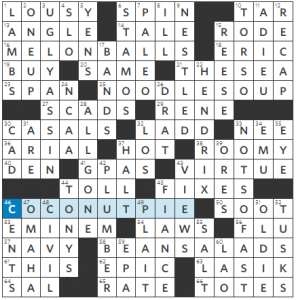 Has this theme been done before? Probably. Almost undoubtedly. But this is so clean and fun that it doesn’t matter, at least not to this solver.

With only four sparkly theme answers, there’s plenty of room for great fill, and Zhouqin delivers big time with UGLY AS SIN and “NOT SO FAST!” I’m also liking “ALL GONE!” and HENDRIX. 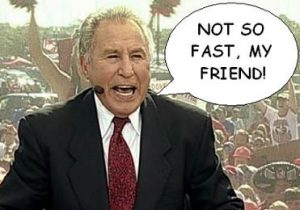 Sure, THE SEA is a little weird with that definite article [Neptune’s domain], and CASALS probably isn’t Monday-level [Spanish cellist Pablo], but everything else was smooth sailing.

This was a tasty little morsel to start your week off right. 4.25 stars. 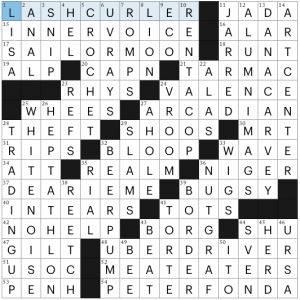 Did not know: Bob Dylan’s “Love and THEFT.”

Clues I’m furrowing my brow at:

This dynamic duo of constructors is back for another great Monday puzzle: 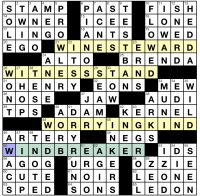 21A: WINE STEWARD [Sommelier]
26A: WITNESS STAND [Court spot for giving testimony]
44A: WORRYING KIND [One constantly fretting]
50A: WIND BREAKER [Lightweight jacket, and a hint to 21-, 26- and 44-Across]

The revealer is quite apt: each of the theme entries has the letters of WIND span the phrase, and I appreciate that WIND was broken (so to speak!) in a different spot each time. That is the kind of attention to detail I really dig as a solver!

– 15A: [Drink with a polar bear mascot] was ICEE, but I always want this clue to be COKE. Anyone looking to do a Schrodinger puzzle could certainly scoop up this double-answered clue!

– 49A: [Strips of developed film, briefly] was NEGS. Is this a commonly known shortening of negatives? It’s new to me!

– 5D: PROWLER for [Cat, or cat burglar] was my favorite clue of the grid! 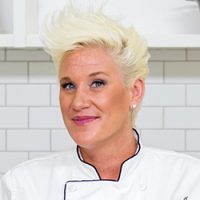 #includemorewomen: We thankfully have a modern reference – ANNE Burrell from “Worst Cooks in America” – to balance out the more dated references: BRENDA Lee, MEG from “Little Women”, Harriet to TV’s OZZIE, TESS, and HEDDA Gabler. Either way, I’m always pleased to see as many women represented! 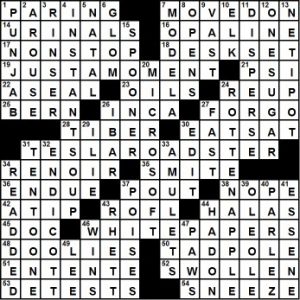 Finishing in 18:50, with a three-minute waste-factor-feeling, I assumed BEQ was not on his A game with this themeless puzzle. None of the clues really grabbed me, like Brendan’s usually do. But, on reviewing it after the solve, I concluded that it is a really nice effort.

Here are the highlights … and then I gotta go watch the National Championship football game: