The Chronicle of Higher Education crossword is back from winter break. You can find the puzzle via Fiend’s “Today’s Puzzles” page.

Up next week, the first Inkubator Crosswords puzzle! I look forward to blogging it.—Amy 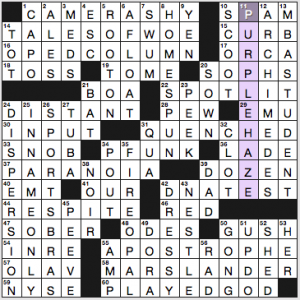 First up, I’d like to reiterate my thanks to Jeff for flagging that racist slur in another recent puzzle (here’s hoping that the editorial team is now more inclined to act on such alarms rather than pooh-poohing them).

Lots of good stuff in this grid: two terrific stacks and two stacks that are quite good. CAMERA-SHY / TALES OF WOE / OP-ED COLUMN is great, as is PURPLE HAZE (dang it, I wanted PURPLE RAIN here, as that is also an amazing guitar song, but Rolling Stone has it at #19) / ARCHIMEDES / MBA STUDENT. I also liked IN NAME ONLY plus SPORTS BRAS and the au courant MARS LANDER plus PLAYED GOD.

That [Cartoon pal of the monkey Boots] clue gets an update this summer, when the live-action DORA the Explorer movie comes out. Isabela Moner plays a teenage Dora out to save her parents and solve an Inca mystery. Benicio del Toro does the voice of Swiper the Fox, of “Swiper, no swiping!” fame. (I expect ample Swiper drama here.) Mainly I’m just excited, as a puzzle editor, to have a fresh angle for DORA clues.

4.5 stars from me. IN RE and OLAV are the worst things in this surprisingly smooth grid.

Note: The Chronicle of Higher Education puzzle is now only published in print, but you can still get a .puz and .pdf every week at Fiend’s Today’s Puzzles page. 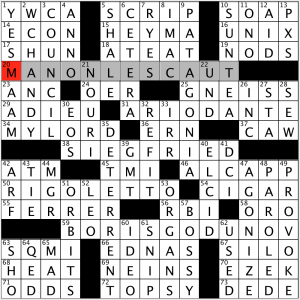 What’s opera, doc? Why, this puzzle’s theme! Five operas with protagonists that proceed from the highest to lowest range in voices. Full disclosure: Everything I know about opera is from Warner Brothers cartoons. So I’m glad to have a theme that compels me to do some research.

Yes, I’ll self-own — I do know that Lucia di Lammermoor is the one with the [spoiler alert] blood-stained wedding dress, and I’ve seen both M. Butterfly and Madam Butterfly. And I’ve seen most of Gilbert and Sullivan’s oeuvre (I am the very model of a modern crossword blog writer; I’ve filled out many grids in both pencil and in highlighter), although I’m told that’s operetta. So perhaps another Fiend writer should’ve taken this assignment; YES MA’AM. Lotsa other fun musical stuff going on, too, what with W.C. HANDY, Peter “et” CETERA, and Cam’Ron’s HEY MA, which samples “Easy” by the Commodores — speaking of which, if you like those easy 70s soft rock hits, check out Jonathan Coulton’s project Some Guys, an album of note-for-note covers of your sensitive-guy favorites. He, like Siegfried, is a man who would fight for your honor, with his sword and magic helmet. 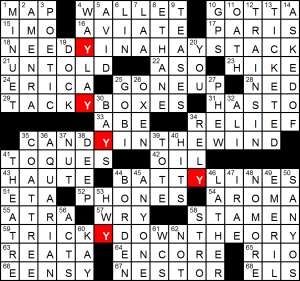 LE changes to Y in five answers. Why? Cos. The last answer, TRICKYDOWNTHEORY is a genius bit of meta wordplay, although the base answer has a lot to answer for. The first answer I found was TACKYBOXES, which confused me particularly as to what was going on, since TICKYBOXES are a doubly dated term for obsolescent phonebooths. CANDYINTHEWIND and BATTYLINES land ok, though NEEDYINAHAYSTACK is a bit shaky.