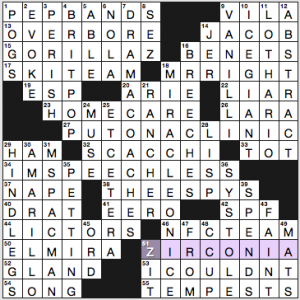 Huh, easier than the Friday puzzle, for me. You too?

This pretty grid’s a 62-worder, and while there are two “huh, really?” entries (OVERBORE, LICTORS—both legitimate words, but not in common use), the rest is surprisingly smooth and zippy for a 62.

Fave fill: PEP BANDS, GORILLAZ, PUT ON A CLINIC (which was new to me), “I’M SPEECHLESS” (which should only be written), THE ESPYS, “I COULDN’T,” BRITPOP, DRAMA COACHES, MIRACLE ON ICE (boo on the ICE GIANT overlap of ICE), MS. PAC-MAN.

Medium answer you might have been perplexed by: 16a. [___ Reader’s Encyclopedia (classic literary reference)], BENET’S. My librarian grandma gave me the 3rd edition (1987 pub) for a college graduation gift. The most recent is the 5th edition (2008 pub). I admit that I seldom pull it off the shelf, since the Internet answers so many questions, but when I reorganized my bookshelves and purged a bunch of books, Benet’s moved right onto my new reference shelf.

Starting Cs become Gs in this letter-changing theme. Spelling changes are made as needed. 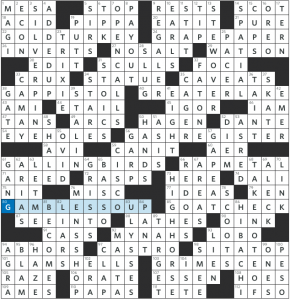 Pretty standard change-a-letter theme. There isn’t much here that piqued my interest except for maybe GAMBLES SOUP. I think it would be more interesting if, in these change-a-letter themes, the words in question were all at least two syllables long. COAT to GOAT, COLD to GOLD, CAP to GAP, etc. are pretty obvious. And I’m not counting CALLING to GALLING since that’s just the gerund form of a one-syllable word. CAMPBELL’S to GAMBLES is more unexpected and therefore more interesting.

I did have to guess at the N at the crossing of HAGEN [Golf legend Walter] and FATONE [Joey of *NSYNC]. If you’re going to cross proper names and one of them is HAGEN, why not clue with respect to Uta who is going to be known to more solvers than golfer Walter (who, interestingly enough, died on the day I was born: Oct 6, 1969)? Also, if your name is FATONE, how many FAT ONE jokes do you have to put up with? 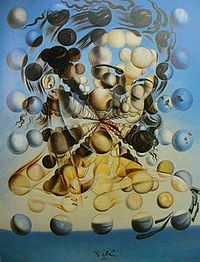 DALI’s “Galatea of the Spheres”

A fairly clean grid but a rather run-of-the-mill theme. Three stars from me.

Still a minor issue with my timer. Those of you who have Across Lite for Mac: does your timer automatically shut off when the puzzle is completed? Mine does not. In messing with settings, I inadvertently turned it off, apparently. I also wasn’t rushing, but I would say this was done in 5-7 minutes or so. This grid only has 66 words! Very well done. An extremely fun solve: 4.5 stars.

We will stop there. Have a great weekend! 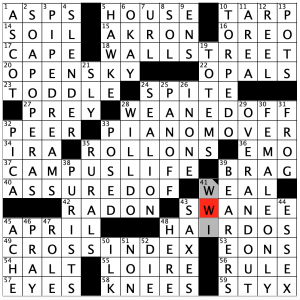 I thought I had finally beaten the Stumper. I get the puzzles early for blogging purposes, so I was embarking on the Stumper earlier this week and I got it solved in under 6 minutes! I was overjoyed until I realized … I had solved the Friday Newsday and not the Stumper! Upon opening the CORRECT puzzle, reality quickly set in, and there was no relief. This is a typical Longo toughie, and I agonized over it for nearly 30 minutes. This is another stellar 72-word grid by one of the greats of our time, IMO. 4.6 stars.

Peter’s given us a bonus Fireball! It’s not blazingly hard, which was OK with me. I’m in a NYC hotel taking a break from shopping with my kid before we got to theater this evening. Hey, this parenting stuff is hard work, but someone’s got to do it.

“The Theme” is the pattern: each theme answer has a three-letter repeat.

What I didn’t know before I did this puzzle: see above re: WES WESTRUM. I also did not know that the men’s room on film shoot trailers is called the DESI.

I leave you with “For Forever,” if you haven’t heard it.