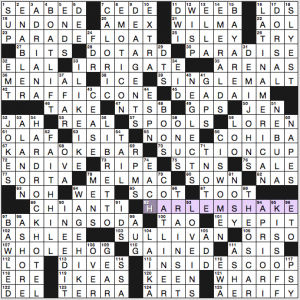 Andy’s theme is things you might order in an ice cream parlor, if that parlor was big on multiple meanings of things.

With the exception of 70a, I like this theme a lot. It must’ve been fun to put together a list of candidate phrases. I assume the research involved a few visits to ice cream parlors, too.

Alrighty, there were two answers in this puzzle that I had to piece together with crossings: 101a. [Ocular socket], EYEPIT, and 125a. [Vaporize], AERIFY. Now, in my medical editing past, I worked on an ophthalmology book … and EYEPIT is not a term I have ever seen. Also not sure if AERIFY gets much use in the world. Merriam-Webster tells me EYEPIT dates back to the 13th century, but who’s been using it since then? And AERIFY’s EWA crossing probably vexed a number of solvers.

Highlights: WHOLE HOG, HARD ROCK HOTEL, FAITH HILL, BOATLIFT (but I know the term as a big undertaking to ferry people across a body of water, as in the Mariel boatlift from Cuba in 1980, and not at all as a 4d. [Marina apparatus]), WAGE HIKE, EMOTICON, DEA AGENTS, TRAIN SET, LATIN AMERICAN, KISS OFF, and—last but absolutely not least—CIS-WOMEN. This blog is affirmatively supportive of our transgender friends, so don’t complain if you somehow didn’t know the term CIS-WOMEN, or [Females whose gender identities match their gender assignments at birth]. I normally frown at use of “females” to refer to humans, but it might be hard to clue this otherwise. “Female people” is just weird.

Here’s one puzzle that you certainly can’t call “tone deaf.” This week’s theme is all about musical instruments.

THEME: Common phrases/names clued wackily to be reimagined as instruments: (every theme clue answer begins with the phrase “Musical instrument played by…”)

Before getting to any nitty-gritty about the puzzle, please take a minute to enjoy this:

I understand it’s a parody, but it does raise the question “Who truly enjoys the sound of a recorder?”

Anyway, this puzzle was another one that was right over the plate. I didn’t chuckle at any of the theme answers, but they weren’t scowl inducing either. Well… I think calling a WHISTLE a musical instrument is a tiny stretch. Was it referring to a slide whistle? I had one of those in a Fischer Price kit when I was a kid. I recall being very, very good at it.

Some inconsistency with whether or not the first word changes meaning (like HOUSE ORGAN vs. UNICORN HORN), but overall, a light and playful diversion.

Still in NYC, headed out for Day 2 of shopping with Emma, so this will be brief. It’s not actually that hard – it took me 15 minutes because my daughter only wants to talk to me when I’m doing something else.

The theme is “familiar phrases that start with B with the B removed.” Some of the answers are pretty funny. Here’s the grid. 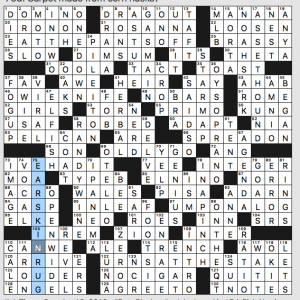