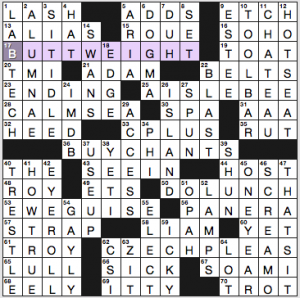 Okay, how do I explain the theme? Let’s lay out the theme clues and answers, and take a look:

I actually don’t think there is a crisp way to describe what the theme is doing, and I’m not a big fan of it.

Also not a fan of early- to mid-week puzzles with such open corners, those stacked 7s. They tend to push towards more junky fill (ROUE TOAT SEEIN SOAMI EELY ITTY OPAH). I did like LAB TECH, HOT SEAT, EYE-ROLL, and DO LUNCH, though.

[“Obviously, Sherlock!”], DUH. This would be out of place in the BBC’s Sherlock but I would not be surprised if DUH appears in the (apparently dreadful) Holmes & Watson movie. (And yes, I know the clue isn’t actually referring to a work of fiction.)

2.9 stars from me. Perhaps you enjoyed the theme more than I did.

Well, now. I do believe I have the distinct honor of blogging the very first Mike Shenk crossword puzzle in the Wall Street Journal. If you’re new around here, Mr. Shenk is a longtime and very highly-regarded constructor, and he’s also been the puzzle editor for the paper for a good many years. The truth is, he’s had many (many, many) of his own crosswords run in the paper, but always under one of numerous pseudonyms (both male and female). He also constructs wonderful variety puzzles, but those have always been in his own name.

In recent months and years, with the spotlight on the lack of diversity in the constructing field, especially with regards to women, we here at Fiend have been hoping for an end to editorial pseudonyms. We feel they muddy the waters and make it more difficult to get a true assessment of the state of things. And they make us as solvers suspicious whenever there’s a new byline. We’d rather be congratulating and promoting a new constructor instead of guessing if they’re a real person or not.

Whether the presence of a “Mike Shenk” byline is here to stay or if we had anything to do with it, I can’t say. But it is welcome, and I hope we’ll see more of it.

On to the puzzle! In honor of Martin Luther King Day coming up. Our theme adds -KING to the ends (or to the “rights”) of four well-known words and phrases. Further, though not actually part of the theme, there are numerous FITB clues with quotes from the Reverend. 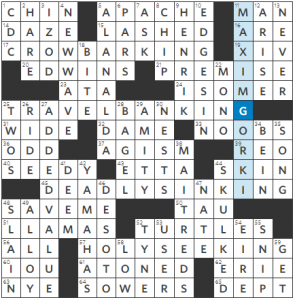 The repetition of a four-letter string made getting the last two entries a lot easier than it would have been. I mostly filled in the answers based on the theme; it wasn’t until afterward that I went back and saw the base phrases. I especially liked the modification of “travel ban” and “deadly sin.”

Here are the quotes in the clues, only two of which I immediately knew, but the rest were fairly straightforward.

MAITRE D’S looks weird in the grid as a plural, but the head-scratchiest entry goes to MAXIM GORKI at 11d [“Summerfolk” writer]. I didn’t know the name, nor the book, nor how to parse what I eventually came up with. I know the title Gorky Park, could they be related? Yes, in fact, the Moscow park is named after MAXIM GORKY (how most of the Internet spells the name). Ironic plot twist: MAXIM GORKI (or GORKY) is a pseudonym of Aleksey Maksimovich Peshkov.

Not a challenging theme, and I wish one of the entries was replaced, but the fill and cluing are both good. 3.5 stars.

Edited to add: I forgot to mention that the grid is not quite symmetrical, and I can’t really see a reason for it. One block was moved (either in the upper middle section or the lower middle section), probably to allow for cleaner fill. I don’t think I’ve ever seen this done before. 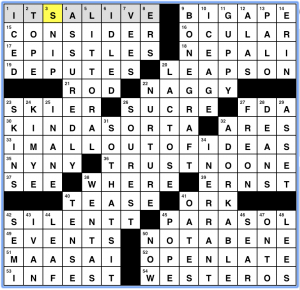 It’s a themeless debut in today’s AVCX!  I’ve chatted with Wyna Liu between puzzles at a few crossword tournaments in the last year, and it was an absolute delight to see her byline on today’s puzzle.

This had a good sense of personality to it, which is what I look for in a themeless puzzle.  A splendid debut, and hopefully not the last puzzle we see from Wyna! 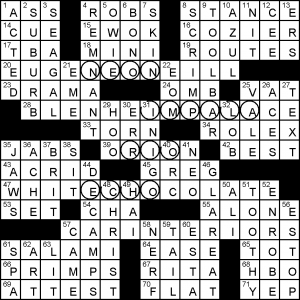 The puzzle uses the “members of category x” theme type, but spans them across two answers, except for the short bonus (I guess?) RIO in ORION. The revealer is a little bland as a stand alone answer – CARINTERIORS, but does describe the theme aptly. The interiors are all car models, belonging to a variety of marques – Chrysler NEON, Chevy IMPALA, Kia RIO, Toyota ECHO apparently (had to look that one up). There are a near infinite number of such models, but these are mostly pretty familiar to me, despite the fact many models have different names here.

Longer themers mean less emphasis on splashy fill surrounding. The themer BLENHEIMPALACE may trip some less Brit-savvy solvers. My last letter was EOM/OMB. I still wasn’t sure what EOM was supposed to mean (end of month, allegedly) but I guess at OMB being ombudsman. At the very least, those two abbreviations intersecting was inelegant.