Either I’m really tired or this was one of the harder Fireball themelesses in recent memory. 1a was completely new to me and I think that threw me off my game a bit. 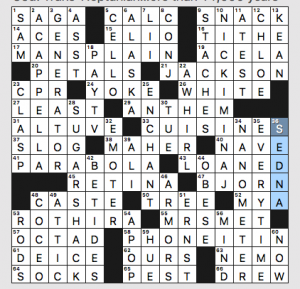 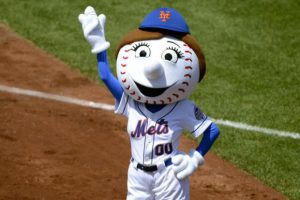 What I didn’t know before I did this puzzle: see above re: “roman-fleuve.” I have also never heard of the trans-Neptunian minor planet, SEDNA. 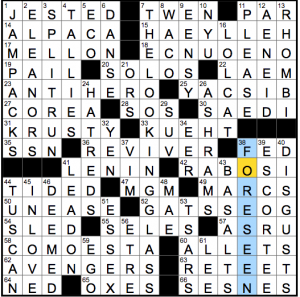 This puzzle doesn’t have a revealer per se, but the major hint to what’s going on comes at the grid-dividing down entry 7d, THE LOOKING GLASS [What Alice goes through to find “Jabberwocky” printed backward]. Every across answer on the right side of that entry must be printed backward, while every across answer on the left side is entered normally. Put another way, once you’re on the other side of THE LOOKING GLASS, everything is printed backward. There are a few across entries that are on both sides of the looking glass, and to avoid confusion they’re all palindromes (SOLOS, SOS, REVIVER, MGM, SELES).

That’s really all there is to explain about the theme. I had a very early aha moment, followed by a strong desire to solve the rest of the puzzle using mostly just the down clues, since those are unaffected by the mirroring. The fact that this grid is only 72 words (a normal themeless/Friday word count) is very impressive, especially given how little crosswordese there is: HATREDS, ESCORTEE, BASALTS and OXES were the worst of it, which isn’t too bad.

I find this puzzle really difficult to talk about because the theme is so simple to describe, and the solve is going to be so subjective based on how quickly you grok the gimmick. It feels like a good Thursday challenge. The fill is mostly unremarkable and the clues are on the easier side for a Thursday, both of which are totally in service of the theme, and reasonably so. I thought “HELL, YEAH!” (backwards), JAM-PACKS, and SPLIT RUN were highlights. [Aspen or Tahoe] is a nice misdirection toward resorts, but the answer is actually SUV.

That’s all I’ve got. An interesting and well conceived Thursday puzzle. Until next time!

His intention was to help us solve his puzzle by giving us a LEG UP (38a, [Boost, and a hint to four of this puzzle’s answers]) — actually, four legs up, which reminds me of how my dog sleeps sometimes. But did the LEG UP actually make it easier or harder for you? 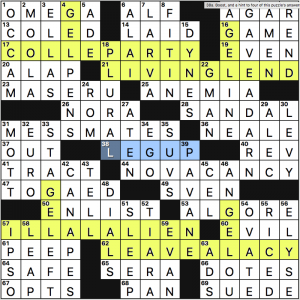 Nice theme despite one downer entry and one iffy entry. Getting these long phrases and their up-turned legs into suitable positions in the grid must have taken some doing. And to have the two upper pairs and the two lower pairs stacked upon each other for five letters just adds to the difficulty. To do all that and still get solid to very good crossing “GEL” entries (GEL PENS, AGE LINE, STAGE LEFT, and ANGELOU) is outstanding construction.

And there’s even room for GAVE A DARN, CANAPES, AL GORE, and NO VACANCY.

That’s a lot of good stuff, which typically means there are some prices to be paid. And there are in things like CO-LED, A LAP, NEALE, ELLAS, ALAI, ATEN, and ELYSE. And then there are your high-value vocab words MASERU [Capital of Lesotho] and PAVANE [Stately Renaissance dance]. That’s some tough stuff, but it is later in the week, so we should be able to work our ways through them.

Overall, I feel like this was a fresh take on cluing even though some of them missed the mark for me. And while there are some downsides to the puzzle as a whole, there are more plusses than minuses. Four stars from me.

I leave you with a video of a PAVANE dance, which is what you think of when you think of Renaissance dancing. Why they filmed this in a castle hallway is beyond me, though. 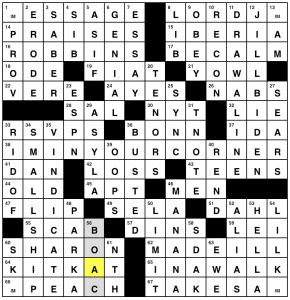 It’s cute, I cracked what was going on when I didn’t have the squares necessary for IMESSAGE and IMPROV nicely fit the down clue.

Remember MYA? Crosswords do, even if most of the music industry doesn’t.

I have a big problem with BOAC in this grid.  I don’t care if it is the sixth word of “Back in the U.S.S.R.”, it’s awful fill that has no business in a crossword.  Other than this, it was nice to see IBERIA, DAHL (It just got announced Anne Hathaway will be starring in a remake of The Witches), KIT KAT, DRAW A LINE, JILL BIDEN, and VINDICATE.  SMALL SHIP felt a little green paint-y. 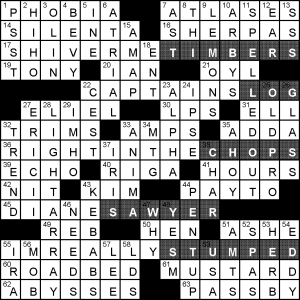 This felt forced. It must have started as a connection between stumped and lumberjacks, which is a good idea, but the execution was wanting for me. The REALLY in IMREALLYSTUMPED seems to just be padding for convenience. RIGHTINTHECHOPS doesn’t seem to have any real existence as a phrase. You can’t just make up your own answers, can you?

Highlights: [Hillary supporters] for SHERPAS. The [usually] in [Fear or spiders, usually] for PHOBIA – phobias being irrational and fear of some spiders is rational.

Lowlights: [Aesthetic feature?] for SILENTA. Baloney! Resorting to ERICII rather than redoing the section/puzzle and then throwing in hoary ELIEL for good measure.