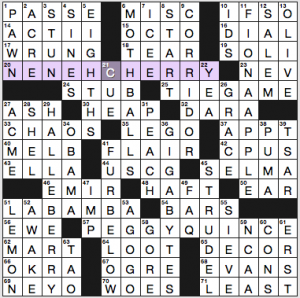 It’s here! It’s here! The Inkubator crossword has begun! The constructor is making her debut at the same time this puzzle venue does. The theme is women with fruits in their names, with a pinwheel layout of two 10s and two 11s, plus a trio of bonus fictional 5s:

I like the all-female theme set. Chuck Berry would fit the general concept, but boy is he problematic.

I also like the feminist focus of this first Inkubator puzzle. ACT II clued via a Lorraine Hansberry play. DARA Torres. A gyn. APPT. MEL B of the Spice Girls. ELLA clued as the [Emergency contraceptive brand]. USCG clued via its WWII women’s reserve. Ava DuVernay’s powerful SELMA. DECOR clued via two decorators of yore whom I’ve never heard of. EVANS clued as [Dale or Sara of country music]. Michelle OBAMA. [Lesbian icon Lesley who had a #1 hit in 1963 with “It’s My Party”], GORE. NCAA clued by way of Rebecca Lobo.

Four stars from me for this joint debut. 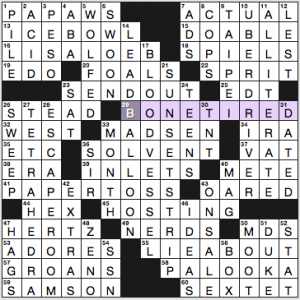 The answer of the evening is 29a. [Overspent?], BONE-TIRED. I am ready for bed, except for this puzzle staring me in the face.

I don’t get this clue: 4d. [What briefs are delivered in, in brief], ABA. Is this referring to ABA (American Bar Association) style? If so, I don’t know that it’s kosher to lop off “style.” There’s APA style, AP style, MLA style, AMA style … and I’m not accustomed to seeing this style-free usage. (Cue the parade of people telling me I’m wrong about this.)

Fave fill: The ICE BOWL. LISA LOEB (who constructed an NYT crossword with Doug Peterson). SPIELS. PAPER TOSS. UBER DRIVER. The triple nerdery of D&D TETRAHEDRA dice, ESCAPE ROOM, and NERDS clued via [Binges on Sporcle quizzes, say, with “out”]. Been so busy with work and life, I am days behind on my Sporcling!

(reminder that the Chronicle of Higher Education puzzle is now only published in print, but you can still get a .puz and .pdf every week at fiend’s Today’s Puzzles page.) 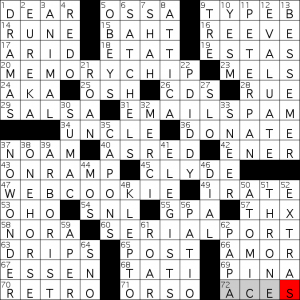 joon here with a quick review of the che puzzle before i head off to mystery hunt. clive probert’s theme is computer terms that include food or drink items:

i thought the theme was just okay. i think perhaps it could have been a little more coherent with a different cluing tack; in particular, i don’t think the clues made sense in context of the title, because the foods weren’t all clued as foods. (notably EMAIL SPAM.) and even the ones that were clued as foods were not clued as menu items. so it felt less tight thematically than it could have been based on the answers themselves. on the other hand, i do kind of love that MEMORY CHIP clue and i think i’m likely to remember it for a while, so i guess there’s a trade-off.

i liked the big 3×8 corners in the grid. the clue for PETER PAN {Eponym for a flat, rounded collar} was a total mystery to me, but piecing together the answer made for a nice aha. (there’s a lot i don’t know about fashion.) i was also tripped up by the great entry {“Ohhh, that explains it!”} NO WONDER, because with the crossings partly filled i was sure it was going to be NOW something, like NOW I SEE or NOW I GET IT. that was another fun one to work out gradually. 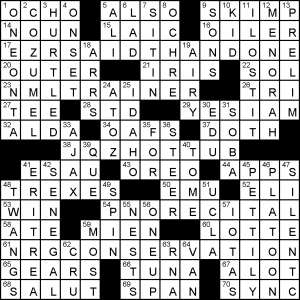 The theme is words that can, if tortured, be represented as three letters spelt out loud… EZR = easier; NML = animal; JQZ = Jacuzzi; PNO = piano; NRG = energy. I think I’ve read to many ca. 1990 Reader’s Digest shorts to find this novel, myself.