This is Tracy Gray’s WSJ debut, but she needs no introduction; she’s had puzzles in seemingly every other venue. Congratulations, Tracy!

This theme was a lot of fun if you don’t mind name-based themes. (If you do, best skip this one.) Tracy and Jeff took famous first names and found their homophones. Some of those homophones were verbs and some were nouns. Somehow they found a way to pair them all up to make wacky but coherent fake tabloid headlines. 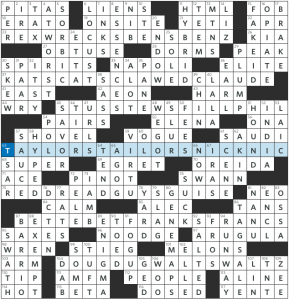 Despite that last one being not quite as good as the others, this is an amazing theme. To get six coherent sentences (plus one almost as good) using homophones of famous first names and to get them all to fit symmetrically is incredibly impressive. It makes me wonder what was left on the cutting room floor. Surely they must have had others that weren’t quite up to snuff.

But this is about as perfect a weekend-sized puzzle as I can think of (discounting any gimmicky themes). The extra space is definitely needed to make full sentences, and each clue/ answer pair was fun and interesting so that the solve never got to be a slog.

There aren’t many long fill items but I did like GENE MAPS, AT WORST, ARUGULA. FAKE ID, ENIGMA, and BARRIO. There are also some fairly stale short items as well (OSSA, NANU, DC TEN, LAIC, NOW I), but those are easily forgiven with a fun and fulfilling theme. 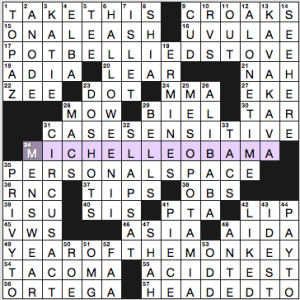 Another puzzle with two great names in the byline! And a third great name in the center row—MICHELLE OBAMA. She’s clued trickily with [“Becoming” someone?], since Becoming is the title of her memoir.

Other stuff I liked: CASE-SENSITIVE. PERSONAL SPACE clued ungrammatically (I think) with [Mine field?], and crossing the related ALONE TIME. YEAR OF THE MONKEY—too bad this puzzle didn’t run in February 2016. DO SHOTS. MESOPOTAMIA. ALIBABA clued as the one-word [Chinese e-commerce giant] rather than the two-word name. CIRCUS ACT and its clue, [Stilted performance, perhaps?]. PRIVY TO.

Why on earth is 38a. OBS clued as [Dict. abbr.], short for obsolete, rather than for obstetricians? Blah.

Not keen on SLAPS AT, or those other entries like HIT AT and LAP AT and HAS AT. These are not good. 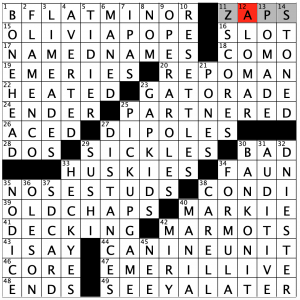 A super wide open grid this week. Only 62 words! That is the lowest word count of a puzzle I have blogged in quite a while. The broad corners and the stair-step middle are full of long answers and nothing is unfamiliar. 27A might be tough on some, especially if you’re not an electrician, but it’s a term you likely have heard before (see below). This was fun, albeit a tad tougher than normal. I think, gradually, these Saturday LAT puzzles have gotten a tiny bit harder. Which is a good thing, since they were a little too easy for a long time. Nice puzzle this week by Ryan McCarty, which I will rate a solid 4.7 stars. 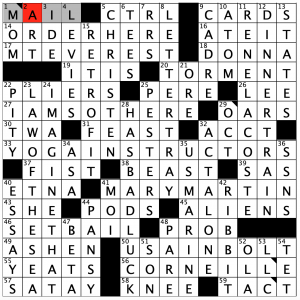 I was totally Stumped this week. For sure. There were long stretches of time staring at a mostly empty grid. I still am not sure where Matthew Sewell lies on the difficulty spectrum, but I am thinking he might be working his way toward the harder end. Lots of good stuff in this 70-worder. Sometimes a puzzle can be TOO hard, but this one is hard enough that there is a nice feeling of satisfaction upon completion. A solid 4.6 stars for this one.