Pete Muller is about to launch a new year of Muller’s Monthly Music Meta. If you’re a meta crossword junkie, don’t miss out. Pete writes, “The eighth annual 2019 MMMM starts on Tuesday, Jan 22. The submission deadline is Sunday, Jan. 27. Subsequent puzzles will come out on the first Tuesday of each month. Once again there is a mega-meta hidden in the 12 monthly puzzles. Best of all, it’s free! People can sign up at https://pmxwords.com/.” 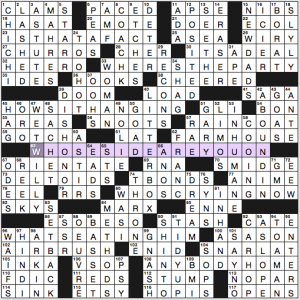 The theme takes familiar questions and clues them as if they pertain to things people have to answer at their jobs:

I didn’t particularly enjoy the theme, and the whole rest of the puzzle felt like a slog to me. With the top three rows having HASAT APSE DOER ECOL, the stage was set for my ennui throughout the puzzle, right down to the bottom’s INKA NOPAR ASASON ENID ASLOPE. I did like CHURROS, “IT’S A DEAL,” FARMHOUSE, TIDY UP, disgusting WET WILLY, NEW DADS, and LITTER BOX.

Quick write-up today since I have yet to prepare for Snow-Megeddon here in the Northeast. I have neither bread nor milk in stock.

THEME: Common words/phrases are parsed to reference a three-letter organization (or “splinter group”)

If you’re going to go wacky, then go full on wacky. The re-parsed phrases are so absurd that I can’t help but like them for the most part. A couple seem like they’re trying a little hard to fit in though… THICK A.C.C. ENT and EX P.L.O. RING are on that list for me. Otherwise, fun to figure out, although I had a slower than normal solve time.

Gotta go get the milk and bread now.

I figured this out with the first theme entry. The title can also be read a P as S, and each theme entry has a familiar phrase with a P substituted for an S. Wackiness results. 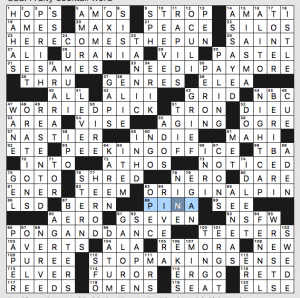 And in addition to the title, we get a revealer at 110a [No longer be comprehensible … and, with its first word divided in three parts, a hint to how to read this puzzle’s title]: STOP MAKING SENSE, or S TO P MAKING SENSE, which doesn’t really make sense grammatically, but we get the idea.

I like the theme a lot. All the base phrases are solid and many of the transformations are funny. The fill, on the other hand…. HAHAHS? TEEVEE? ISTLE? SPH as abbreviation for “sphere”? IN HD? Plural SESAMES? MAHI by itself? PINA without colada? Plus some of the usual suspects (ALII, ELIE, SSE, SI SI, no no).

What I didn’t know before I did this puzzle: that ATHOS is the oldest Musketeer.